The implementation of the Prawer Plan for unrecognized villages in the Negev has become a major policy objective for the Netanyahu government. 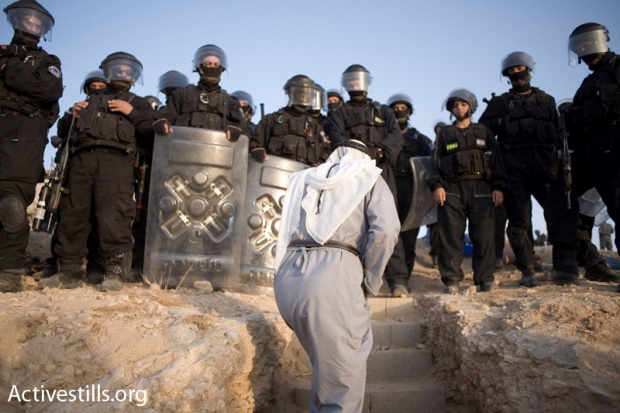 Following one of the most heated debates the Israeli parliament has seen in recent years, the Knesset approved the Prawer-Begin Plan for the Arrangement of Bedouin-Palestinian Settlement in the Negev yesterday (Monday). Commonly referred to as the Prawer Plan, the new legislation will allow the government to destroy dozens of so-called “unrecognized” villages in the South and remove between 30-40,000 Bedouin from their homes.

According to the plan, those Bedouin citizens who have registered land claims will be offered monetary compensation or land in an area designated for resettlement.

Following demands from the right-wing Jewish Home party, a new article was added to the bill at the last minute, stipulating that the government’s compensation offer will expire after a certain period of time; failure to comply with the process will not only result in forced removal to the relocation zones but also a loss of monetary compensation or land, which would have previously been offered.

This is the largest attempted eviction of a native Palestinian population by Israel in decades. At the end of the process, all remaining Bedouin land claims will be erased from the state record.

During the Knesset debate, several Palestinian members of Knesset tore the bill before leaving the room. Due to opposition to the bill from the Right – settler groups object to giving any land rights to the Bedouin – none of the Likud ministers were willing to defend the bill in the name of the government. The offer ended up passing in a very narrow vote, 43-40, thanks to the support of Yair Lapid’s Yesh Atid party, which also sent one of its ministers to defend the law.

Destroying Palestinian villages while planning and building for Jews

The issue of the unrecognized villages, most of them in the South, has accompanied Israel since its inception. In the early 1950s, Israel refused to recognize the native Bedouin population’s claim to the land due to a lack of registration of the land by the British Mandate authorities (there are, however, records of permanent, non-nomadic Bedouin settlements going back to the 19th century). Other unrecognized villages are “temporary” settlements of Bedouins who were displaced in the 1948 War and were never allowed to return to their lands (after the war, Bedouin who lived in the western Negev were ordered to move east, and Jewish settlements were built in the area).

Over the years, Israel has built seven towns for the Bedouin and demanded that the population living in unrecognized villages relocate to them. Many preferred to stay in their villages, claiming that the townships are not suitable for their way of life, which is centered on agriculture and the use of farm animals.

Gradual recognition of the problem began in the 1970s when the government conducted a survey of Bedouin land claims. However, those claims weren’t recognized and more than 40 villages were defined as illegal, and were therefore deprived of government services. Petitions by Bedouin citizens to Israeli courts on the matter were rejected.

The Prawer-Begin bill is the result of a process that began in 2008 with the appointment of a national committee of inquiry into the issue of the unrecognized villages. The final plan will see most of the unrecognized villages destroyed, and some — mainly in the triangle between Ksseifa, Dimona and Beer Sheba — recognized by the state. A new bureau in the Prime Minister’s Office (PMO), led by former IDF General Doron Almog, will be in charge of the execution of the plan (Ehud Prawer, who gave the plan his name, is also a former IDF general who is now a senior executive in the PMO). 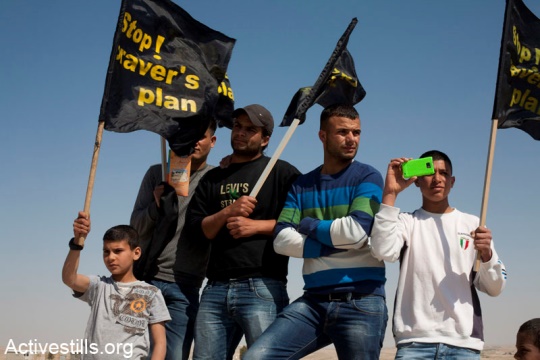 A Bedouin protest against the implementation of the Prawer Plan for the unrecognized villages, March 2012 (photo: Activestills.com)

The Bedouin leadership and civil and human rights groups reject the Prawer plan. They demand the villages be recognized and that the local population be included in the process of drafting new zoning plans. They also point to the fact that the government encourages Jews to move south, especially to agricultural settlements, all the while aiming to destroy Arab settlements that in some cases predate the creation of the state. The government is currently planning 10 new settlements for Jews in the Negev.

Supporters of the plan claim that it will benefit the vast majority of Bedouin by moving them to towns which will have better infrastructure and more employment opportunities than in the unrecognized villages. They point to the opposition of the extreme-Right as proof of the plan’s generosity towards the non-Jewish population.

A test for the government, Palestinian population

The Prawer Plan is becoming a major test for the determination of the government, on one hand, and of Palestinian citizens of Israel on the other. The Netanyahu government views the plan’s successful execution as one of its major policy objectives for this term. A large budget has been secured for the bureau tasked with its implementation and the proposed bill includes the creation of at least 250 new positions for personnel in the Israel Police’s Southern District.

Palestinian Knesset members and Bedouin leaders are promising resistance to the evacuation with all possible means, including seeking the involvement of international bodies and foreign states. Yet the crucial confrontation will take place on the ground, where things are still up in the air. It’s very hard to estimate the degree of resistance the Bedouin population will be able to demonstrate as the Prawer Plan is implemented. The project is planned to take place in stages, with the actual evacuation process taking place seperately in each area.

The Bedouins are the poorest, least organized of Israel’s non-Jewish citizens and public opinion seems hostile to them. In the past, they haven’t been able to mobilize in the way Palestinians in northern towns and cities in Israel have. The exception is the ongoing battle over the village of Al-Araqib, which was destroyed by Israel and rebuilt by local Bedouin over 40 times.

The Prawer-Begin bill will now be sent to the Knesset Interior Affairs and Environment Committee to be prepared for the second and third readings, which could take place as early as next month.