If the Nobel committee sought to move the needle on Colombian peace by honoring one of its auteurs, they might do well to remember a similar experiment that is all-too-familiar to observers in the Middle East. 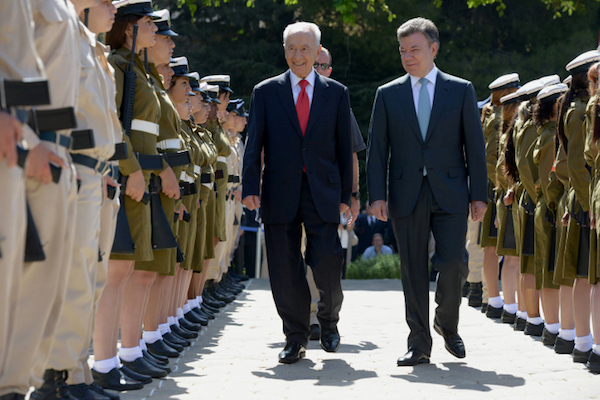 This year’s Nobel Peace Prize, which went to Colombian President Juan Manuel Santos “for his resolute efforts to bring [Colombia’s] more than 50-year-long civil war to an end,” is being portrayed by some as a potential counterbalance to the October 2 referendum in which Colombians narrowly voted down a peace deal between the government and the Revolutionary Armed Forces of Colombia, or FARC.

Reacting to the Nobel decision, Colombian journalist Carlos Arturo Charria, a columnist for El Espectador newspaper, told +972 by email that he hopes the prize pushes half of his country “to come out of its hate and misinformation” and support the peace deal.

It’s a laudable aim for a prize that, in 1973, went to none other than Henry Kissinger. But the Nobel Peace Prize Committee’s decision may instead speak to a fundamental misreading of the dynamics of protracted conflict.

If the Nobel Committee sought to move the needle on Colombian peace by honoring one of its auteurs, they might do well to remember a similar experiment that is all-too-familiar to observers in the Middle East. It was in 1994, after all, that the peace prize went to Yasser Arafat, Shimon Peres, and Yitzhak Rabin “for their efforts to create peace in the Middle East.”

Like Peres and Rabin, who helped establish Israel’s settlement enterprise, or Yasser Arafat, who could not part with his signature fatigues even at the Nobel ceremony, Santos is part of a group of laureates who could be described as nouveaux pacifists, presiding over historic overtures to peace but lacking the lifelong bona fides of, say, Martin Luther King, Jr., the 1964 peace prize winner.

There can be no question that Santos has more in common with the former group. Reacting to the passing of former Israeli President Peres, a man with whom the Colombian president now shares two accolades, Santos said in a September 28 tweet: “I had the privilege of knowing him and of finding in him a friend of peace.”

Indeed, when Peres was Israel’s president, Santos, speaking to the Israeli press, said he was proud that his country had been called “the Israel of Latin America.” In a report filed at the time, Ilana Dayan of Israel’s Channel 2 drew an even more troubling parallel:

“It’s hard to miss the Israeli fingerprints [in the military operations in Colombia]… suddenly there are targeted assassinations, eliminating the number two guy in FARC, within Ecuador. The methods of operations that were proven successful in the casbahs of Nablus and Hebron now speak Spanish.

The “number two guy” Dayan is referring to was Raúl Reyes, the FARC leader who was assassinated in a cross-border raid on March 1, 2008 during Santos’s tenure as defense minister. That Santos must have been intimately involved in its planning and execution — or that the Organization of American States at the time called the raid “a violation of the… principles of international law” — seemed of no consequence to the Nobel committee today.

But even if the Colombian president’s past is not precedent (a sentiment today’s Colombian press seems to be espousing), the question remains: are one man’s past misdeeds a surmountable obstacle on the road to peace?

Drawing parallels with the Palestinian-Israeli “peace process,” which was run into the ground during the tenure of the 1994 peace prize winners, would seem too simplistic, except that it was Santos himself who made the connection.

Speaking to a Der Spiegel interviewer in 2014, Santos said he had been “relying on international counselors since the very first day” of the Colombian peace process, including “people who have been very closely involved in the… Israeli-Palestinian talks.”

One wonders what wisdom the Colombian president might have derived from the likes of Dennis Ross, who famously wrote of his main Palestinian interlocutor: “With Arafat, a modus vivendi is possible, but peace is not.”

That skewed understanding of “peacemaking” may not have been the reason for Colombia’s “no” vote on October 2, but if the failed Palestinian-Israeli peace process is any guide, getting to “yes” will take more than an honor bestowed upon one man.

In his acceptance speech on December 10, 1964, Dr. King proclaimed:

I believe that what self-centered men have torn down men other-centered can build up…. Most of these people will never make the headline and their names will not appear in Who’s Who. Yet when years have rolled past and when the blazing light of truth is focused on this marvelous age in which we live, men and women will know and children will be taught that we have a finer land, a better people, a more noble civilization because these humble children of God were willing to suffer for righteousness’ sake.

As the suffering continues — from Colombia to the Holy Land — we can only hope that he was right.