Before he was killed in a gunfight with Israeli forces, Basel al-Araj was a nonviolent activist who fought for his village. His transition from nonviolence to armed struggle feels like a personal defeat for me. 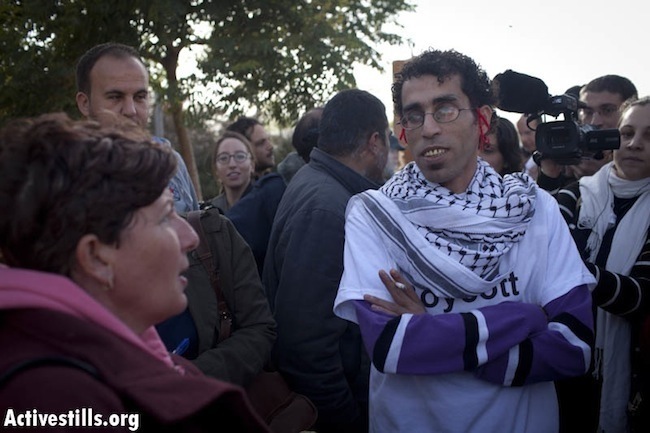 Earlier this week, as I sat in my car in the morning, I overheard on the radio that soldiers had killed a Palestinian after coming to arrest him in the city of Al-Bireh, next to Ramallah. An hour later I see that Issa had uploaded a photo of Basel al-Araj. to his Facebook page. “Strange,” I thought to myself, “I had no idea Issa and Basel knew each other.” Then I read the caption, which announced that Basel had been killed by the army.

I knew Basel from my frequent visits to Walaja, his home village, but we never became friends. I don’t believe we ever spoke, whether face to face or in a larger forum. At most, it was always “salaam aleikum” when our paths happened to cross in the village. Perhaps — and maybe I am just imagining — we spent a few hours in detention together after a demonstration against the separation wall in the village.

If only the struggle took off 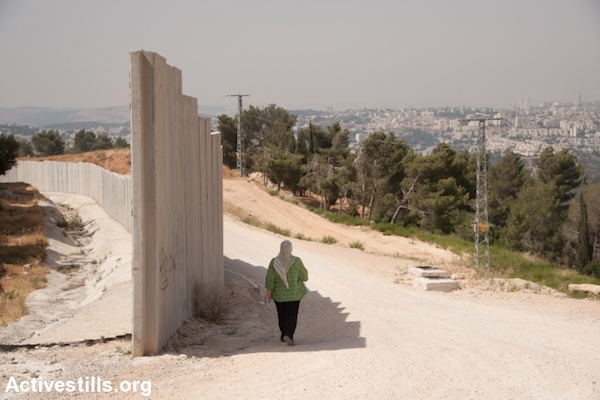 A Palestinian woman walks along an unfinished section of the separation barrier in the West Bank town of al-Walaja. (Ryan Rodrick Beiler/Activestills.org)

According to the report on the radio, Basel was the head of a small, armed group that planned to attack Israelis. When the soldiers arrived at his hiding place to arrest him, the two sides exchanged gunfire. End of story. This, according to the Israeli report. The Palestinians reported that Basel had been executed. The Israeli version of the story could very well be the truth.

And yet, I cannot shake Basel’s death. It is clear that this is yet another reminder of the enormous gulf between myself and most Israelis. That I will not be able to explain to them how it is possible that basic national identity is totally unable to blur and erase personal acquaintance — even one based on the solidarity of a joint struggle.

Basel was killed at age 31. He was 24 when we were together in the protests against the village. A young man whose smile and body language always gave me the impression that he was gentle, yet confused.

The struggle against the wall in Walaja should have been one of the greatest popular, nonviolent struggles against the occupation. Five minutes from Bethlehem and 10 from Jerusalem. The demonstrations, which began in 2010, could have brought out large numbers of Israelis and Palestinians. The tiny village could have received support from the large cities nearby. But the villagers were unable to hold weekly protests like in Bil’in, and the struggle quickly faded. The wall around the village was built, leaving its land on the other side in an area that became a national park. Meanwhile the occupation continued to strangle the residents. Following their stinging defeat, the leaders of the struggle should have decided what comes next.

Basel continued believing in a nonviolent struggle. He took part in an action inspired by African American Freedom Riders in the 1960s: a few Palestinians got on settler buses in the West Bank, before they were forced out and arrested. This should have been enough to prove that Israel is an apartheid state. But what was part of a long-term strategic struggle in the United States turned into a one-time provocation in the occupied territories. Just some noise on social media, nothing more.

Is this what happened with Basel? Is the Palestinians’ current inability to carry out an effective, popular struggle what pushed him, step by step, to allegedly taking up arms? I can only guess.

I didn’t see Basel for several years. Around a year ago I heard that the Palestinian Authority arrested him with another person; both of them were allegedly part of a cell that planned to attack Israelis. They were arrested after six months. Since then, I saw on his Facebook page that soldiers had carried out a number of nighttime raids on his family home in Walaja. Since he was never there, the soldiers were satisfied with trashing the home. This went on for half a year until Monday night.

Basel had a least half a year to carry out an armed attack on Israel. He knew that Israel would find him sooner or later. So why did he wait? Perhaps because the story is more complex than a wanted Palestinian opening fire on “our forces” who came to arrest him? It doesn’t really matter.

Basel had a number of political partners in Walaja who, like him, were resigned to move on, after the struggle failed. The wonderful and impressive Shereen was able to get a job abroad and has been gone for a few years. Another activist, whom I love with all my heart, turned into a bitter, tired man who is constantly mocked by his wife for not bringing any money home. A few courageous young men from the protests, who also took a very strident position on anti-normalization, now work in construction in Israel. Another activist uses the recognition he received during the years of the struggle to provide for his family. None of them will ever be mentioned on Israeli radio. Of course, no one will ever talk about what happens when the weaker side fails in its nonviolent struggle: some will leave, some will grow tired, and some will take up arms. 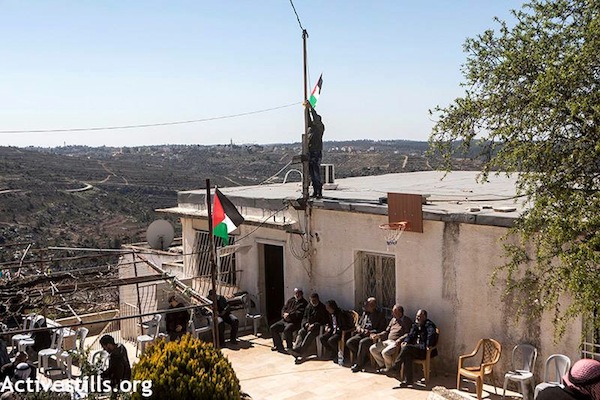 Palestinians mourn the death of Basel al-Araj, a Palestinian activist and writer, during an alleged gunfight with Israeli forces in Ramallah the night before, Walaja, West Bank, March 7, 2017. (Activestills.org)

My friends’ Facebook pages were full of photos of the “hero,” the “fida’i” (freedom fighter), the “learned shaheed” Basel al-Araj. The young Basel turned into a man. But the smile is the same smile.

Basel’s transition over the years, from an activist in the popular struggle to someone who took up arms and died a violent death, is yet another defeat for me. Like the knife attacks in Jerusalem and the collective punishment in the winter of 2015, like the wars in Gaza, everything I do to try and fight back is washed away by the endless violence. Walaja is a bleeding wound that I cannot approach. I am half afraid, half yearning to come to the village and see the posters hung up with Basel’s face. Smiling, of course.

Aviv Tatarsky is a researcher with Ir Amim. A version of article was first published in Hebrew on Local Call. Read it here.