Four houses and one kindergarten in south Tel Aviv, all serving the African asylum seeker community, were hit  within the same hour by Molotov cocktails. Testimonies from asylum seekers and Israeli neighbors indicate a coordinated pogrom.

“Somebody is trying to get rid of these damn Sudanese,” said an Israeli resident of Shapira neighborhood in south Tel Aviv this morning. The term “Sudanese” is commonly used by Israelis to describe all African asylum seekers. The house adjacent to the house of this Israeli was hit at around 1:30 a.m. by three Molotov cocktails: two were thrown through the window, and one into the entry hall. No one was hurt, as residents and neighbors quickly awoke and extinguished the fire. Another fire bomb was thrown into a neighboring yard, where five asylum seekers sleep outdoors. Furniture was badly burned, but none of the residents were hurt. All of the cases are probably linked, as Mya has noted.

“Whoever did this is right, but he’s doing it the wrong way,” says the neighbor. “This fire almost burned my car, and also – there is a small girl in that house. He should have waited until nobody was home, and then blown the place up to send them a message”.

Shortly after the first two attacks, two more houses were hit in the center of the neighborhood. “My brother and I were sleeping, and we awoke from the sound of the fire – which started right next to my bed,” says Maskala Masgene, an Eritrean asylum seeker. “They opened the window and threw the bottle in through the bars. When I saw it I took the bottle and threw it right out to the street. I couldn’t go back to sleep since. I’m too scared. I understand they were not caught yet, whoever did this. I’ve experienced hate talk on the street before, but nothing like this.”

The apartment next door was the fourth place hit. Here the bottle exploded on the frame of the window. Another Eritrean woman and her four children were sleeping inside, right under the window. 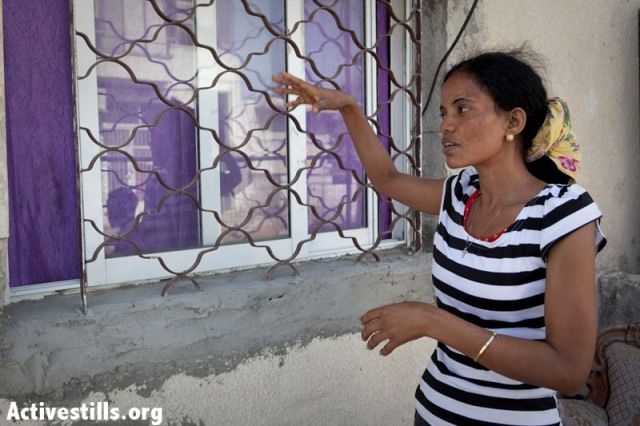 The fifth attack, at around 2:30 a.m., targeted a kindergarten that also serves as a home to the Nigerian couple who runs it. The burned playground equipment was still visible in the morning. “We didn’t wake up from of the fire, but actually from the knocks on the door by the firefighters,” says Balsin Baraka. “They told us to stay inside, and now the children are coming and have no games to play with outside. I have no idea who could have done this but it’s terrifying.”

Tel Aviv Mayor Ron Huldai condemned the crimes. Acknowledging the hardships suffered by the Israeli residents of south Tel Aviv as a result of the refugee influx, he said in a statement that “the Tel Aviv municipality is investing many resources in order to make life easier for the residents, and I call on the Israel Police to do everything to catch whoever is behind this horrible act.”

All five locations were visited by police forces, who also located unused Molotov cocktails. Police say that they have not yet identified suspects in the attacks.

While refugees are uncertain about the identity of the attackers, Israeli residents of Shapira are all very certain that this was a racial attack. In addition to the neighbor interviewed above, several other neighborhood activists said that this is a culmination of a dangerous process that’s been going on for quite some time. “There is racist propaganda that comes down from the government, through members of the Municipal Council, and to the street – and this is the result,” accuses Nir Nader, a resident who is planning a solidarity vigil later on today. “People preaching violence should be in prison, and if the state doesn’t stop them – we shall.”

On Friday afternoon, a demonstration against violence and in solidarity with the asylum seekers took place in the impoverished Shapira neighborhood of south Tel Aviv, where much of the refugee population is concentrated. As asylum seeker bystanders looked on from the side, screaming matches erupted between refugee advocates potesting against violent racism, and angry residents blaming the protesters for turning their backs on their fellow citizens.

“These anti-Israeli leftist anarchists came here to make a mess. You don’t even live here!” one woman from Shapira yelled, although many of the demonstrators were locals. “Go demonstrate in north Tel Aviv! Why do we have to accept all of them in Shapira? Why not in north Tel Aviv or Herzliya?” said another, referring to wealthier areas in which refugees are less likely to live.

As the exchanges grew more heated – with some Shapira residents tearing signs from the hands of protesters – police separated the residents and the demonstrators behind barricades, on separate sides of the street. One demonstrator was arrested.

In recent years, conflicts often break out between lower class Israeli residents of south Tel Aviv and activists in refugee rights’ groups. Calls to “send the refugees to north Tel Aviv” are commonly heard, charging the upper class with hypocrisy  for their purported lip service to liberalism while the poorest sectors of society must deal with the difficulties of absorbing refugee communities. Over the years, left wingers and NGO activists have started to incorporate the hardships of those residents into their agendas. Activists now tend to emphasize how better treatment of refugees by the government would also ease the pressure on locals. 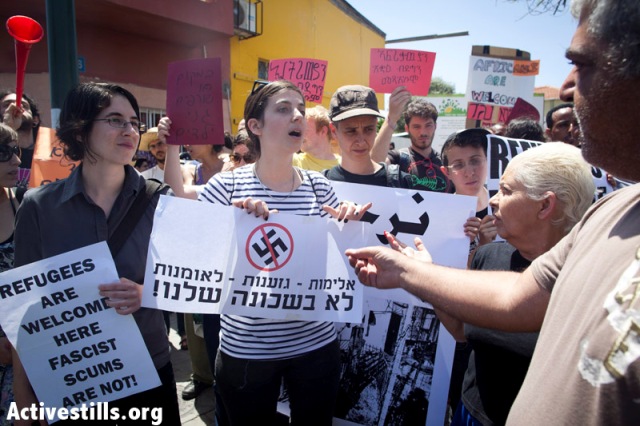 Demonstration in Shapira. "Violence, racism, nationalism - not in our neighborhood!" (Oren Ziv / Activstills)