While it is impossible to predict what kind of relationship Israel might have with a post-Mubarak Egypt, it is perfectly legitimate to be concerned about possible negative ramifications. But these concerns should not be an excuse for discrediting the Egyptian protesters

Today Egypt is undergoing historic, organic change led by the people of Egypt.  The Egyptian people – not led by any single party or individual – are demonstrating through their actions that the longstanding political status quo in Egypt cannot continue.  It is still unknown how these protests will end and what Egypt’s government will look like in both the short-term and longer-term.  What is clear, however, is that the will of the Egyptian people will not be denied, either by the Mubarak government or the international community.

For those who view the Middle East primarily through the prism of Israel and the Israeli-Arab conflict, the developments in Egypt provoke understandably complicated feelings.

The courage and determination of Egypt’s citizens is inspiring, embodying the desire for freedom, dignity, and rights that is common to people the world over.  At the same time, there are understandable concerns about what change in Egypt will mean for Israel, notwithstanding the fact that the protests, at least thus far, include no overt anti-Israel (or anti-American) component.  The Camp David Accords – the Egypt-Israel peace agreement signed in 1978 – has for more than 30 years been the single most important element of security and stability between Israel and the Arab world.  While it should not be assumed that change in Egypt will mean the end of this treaty, it cannot be assumed that Egypt-Israel relations in the wake of an Egyptian political tectonic shift will continue as before.  This is especially true given widespread popular Arab frustration over the impasse in the peace process, anger at the continuing occupation of Palestinian lands and the siege of Gaza, and outrage over Israeli settlement activities, especially in Jerusalem.  Already, reports that the Egyptian Army has abandoned the Gaza border raise serious and immediate fears about the ramifications of change in Egypt for Israel. 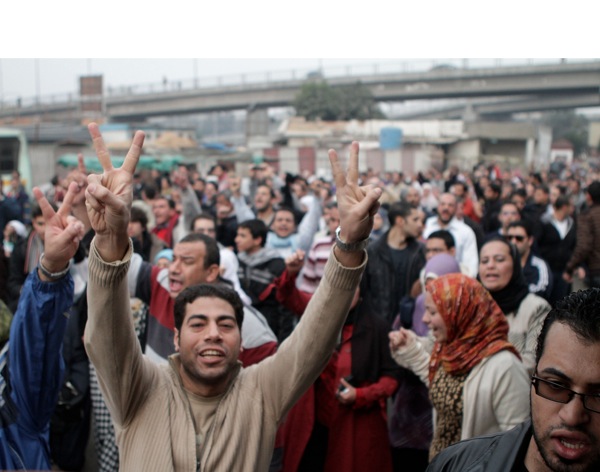 Concerns about the future of Egypt-Israel relations are thus entirely reasonable.  What is not reasonable is for anyone – in the U.S., Israel, or elsewhere – to suggest that, because of these concerns, the protests are illegitimate or that the only acceptable outcome in Egypt will be to turn back the clock and return to the political status quo ante.  Peaceful protests are undeniably legitimate and the clock will not and cannot be turned back.  Change in Egypt is happening, regardless of whether strategists in Washington or Tel Aviv welcome it.

It will still be some time before anyone knows what Egypt will look like in the future – whether it will be more democratic, whether corruption will end, whether the people’s demands for accountability and hope will be met with a more accountable and more effective government.  For the sake of Egypt, we all must hope that the violence stops, that security is restored, and that the demands of Egypt’s courageous citizens result in the real change that they so want and deserve.

It will also be some time before anyone knows whether Egypt will, in the future, continue to be a partner in peace for Israel.  I fervently hope that this will be the case, for the sake of the security and stability of both Egypt and Israel.

For now, the Obama Administration and the world – including those of us care deeply about Israel – must stand, squarely, with the people of Egypt.  It is the right thing to do and only by doing so can we expect to have any credibility when the dust begins to clear and a new Egyptian political reality begins to emerge.

At that time it will be imperative that we spare no effort to ensure that Egypt-Israel peace does not become a casualty of domestic political change in Egypt.  This will require the Obama Administration to engage Egypt – whatever it looks like politically – with urgency and seriousness, adjusting this important bilateral relation to reflect a new political reality.  At the same time, the Obama Administration must take dramatic, decisive action to re-accredit the peace process.

Nothing can guarantee that Egypt will continue be friendly to Israel or that the Camp David Accords will hold.  However, continued Israeli occupation and settlement in the West Bank and East Jerusalem – and the total failure of the peace process – will guarantee that Israel-Egypt relations under the as-yet-to-be-determined new Egyptian political status quo will at best continue to be severely strained, and at worst could enter a dangerous new phase.

Lines are increasingly being drawn in the Middle East between those courageous people putting their lives on the line for freedom and democracy – which by definition involves significant uncertainty – and those who in the name of “stability” doggedly defend a status quo that no longer enjoys even a veneer of legitimacy and which cannot be sustained.  Friends of Israel have a choice today about which side of history they want to be on.

Lara Friedman is the Director of Policy and Government Relations at Americans for Peace Now.