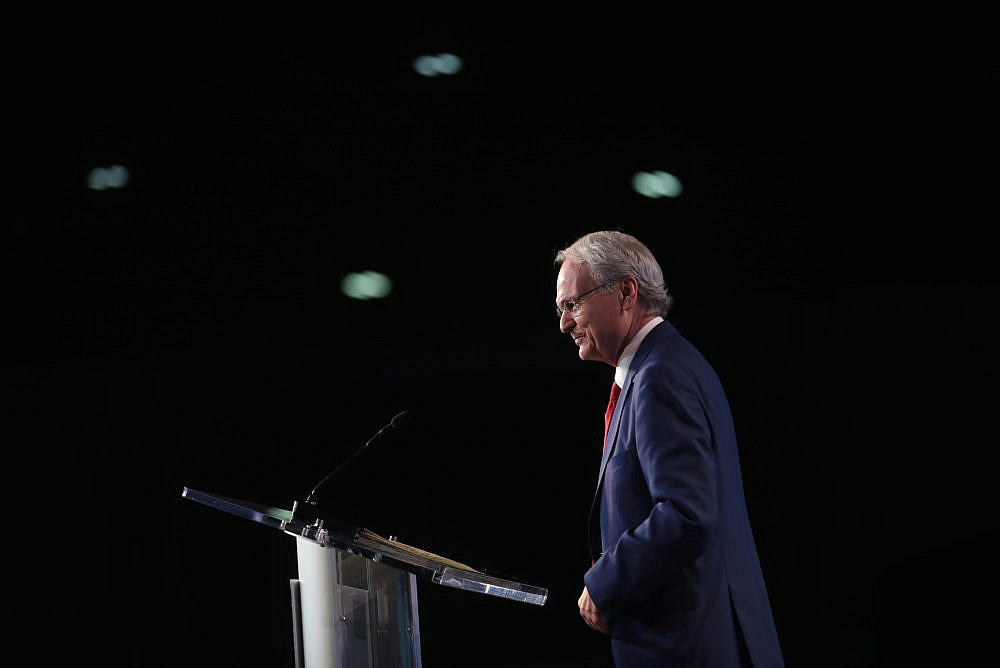 What should have been the straightforward election of a new board chair at the leading umbrella organization for the American Jewish community in late April devolved into an ugly spat mired in Islamophobia. The proposed new chair of the Conference of Presidents of Major Jewish Organizations (COP), Dianne Lob, a finance executive at the investment management firm AllianceBernstein, was touted by advocates for her experience and mainstream pro-Israel positions.

Yet Lob’s election was ferociously opposed by Morton Klein, head of the far-right Zionist Organization of America, because of her role as chair of COP member organization HIAS, formerly the Hebrew Immigrant Aid Society. Among his arguments against Lob, Klein claimed HIAS is an enemy to Jews because the majority of refugees it serves today are not only not Jewish, as they once were, but Muslim. “HIAS is not a Jewish organization,” Klein wrote, therefore Lob was not suited to lead COP as a major Jewish umbrella organization.

For Klein, the tone and content of his objection was nothing out of the ordinary; his denunciations of anyone he deems insufficiently pro-Israel are routinely steeped in Islamophobia and anti-Arab racism. But this is not just about one bad actor: while many liberals in the Jewish institutional community came to Lob’s defense, it was not enough to prevent her ascent to COP chair from being delayed.

It is true that Klein has been striking this tone for years with minimal impact. But in the Trump era, he has found his moment. Klein is in lockstep with the furthest right reaches of the Trump ecosphere — the ZOA hosted Steve Bannon at its annual gala in 2017 — and the Trump administration itself has an authoritarian, anti-immigrant, and apocalyptic demeanor that matches Klein’s outlook perfectly. 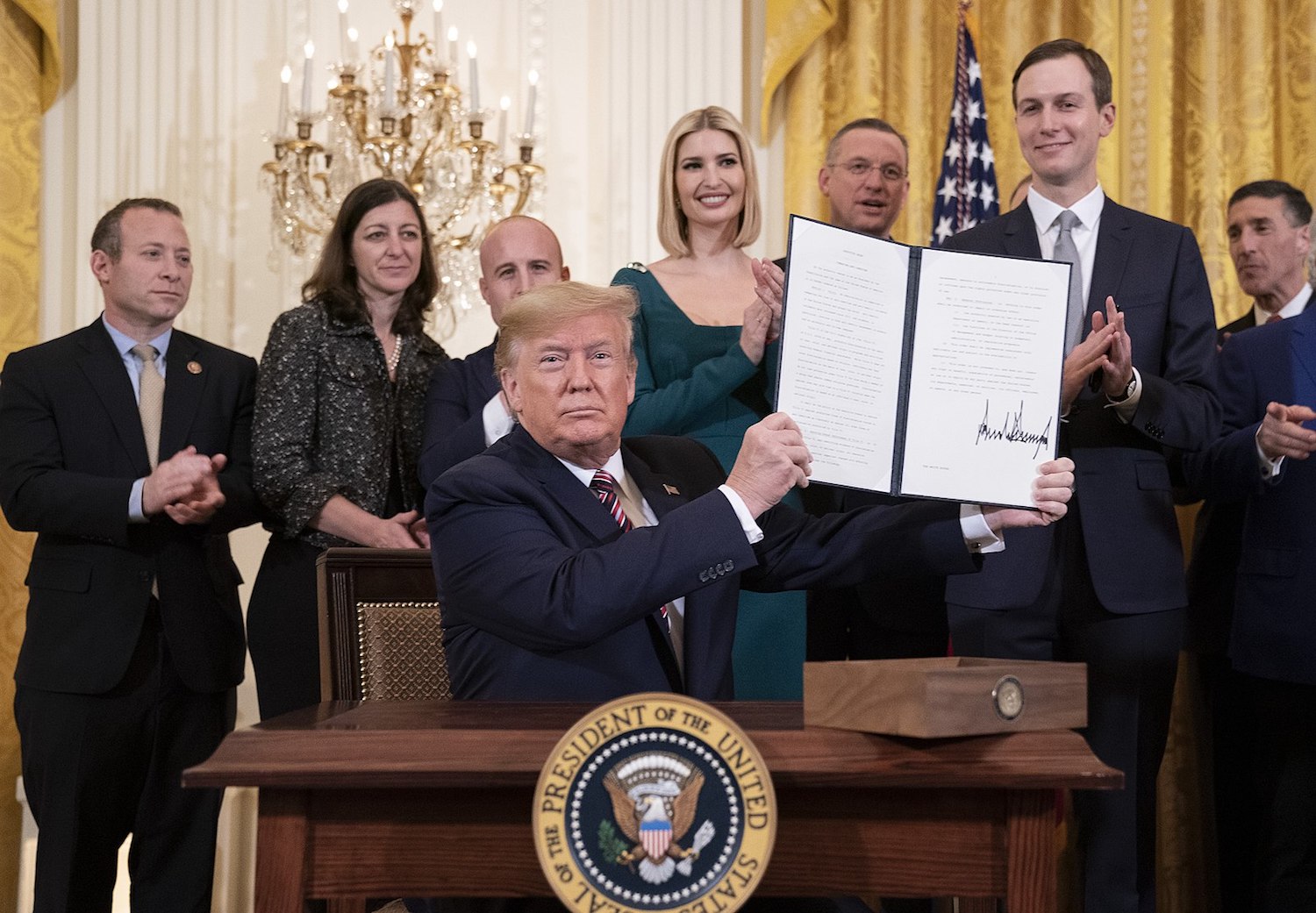 Moreover, it is not a stretch to suggest that this dispute at the COP exposes some of the core dividing lines in the organized American Jewish community. To be sure, it is a version of the long-standing universalist vs particularist debate — the “tikkun olam” Jews vs. the “ahavat yisrael” Jews — but that is too simplistic. Scratch the surface, and we find that this is in fact a deeper disagreement about values and identity.

While most Jewish leaders, institutions, and media outlets have not adopted Klein’s manner, too many share his assumptions: first, that there is nothing particularly Jewish about standing up for non-Jews; and second, that Muslims are the eternal enemy of the Jews. In other words, Islamophobia has become a benchmark for many on the right for assessing whether someone is “really” Jewish or not. Under this formula, many Christian organizations are even more Jewish than some Jewish organizations.

To be clear, HIAS is definitely a Jewish organization, and a major one at that. For the past 140 years, HIAS, which adopted its abbreviated name in 2014, has helped settle millions of immigrants and refugees coming to the United States. Initially, its mandate was to help Jewish immigrants — from Eastern Europe and Russia, Germany, Cuba, North Africa, the Soviet Union, Iran, South Africa, and the Middle East. Over time it began working with non-Jews, refugees with familiar stories fleeing persecution, violence, and bigotry.

For its troubles, HIAS has become a fixation for antisemites. On Oct. 27, 2018, a gunman entered the Tree of Life synagogue in Pittsburgh, just when Shabbat services had begun, killing 11 and wounded six in the deadliest attack on American Jews in the country’s history. The gunman, a white nationalist hopped up on news reports and White House demagoguery about an “invasion” by Central American migrants, blamed HIAS and the Jews for what he saw as a lethal threat to his “people.” He selected the synagogue because, a week earlier, it had participated in a program run by HIAS called National Refugee Shabbat. 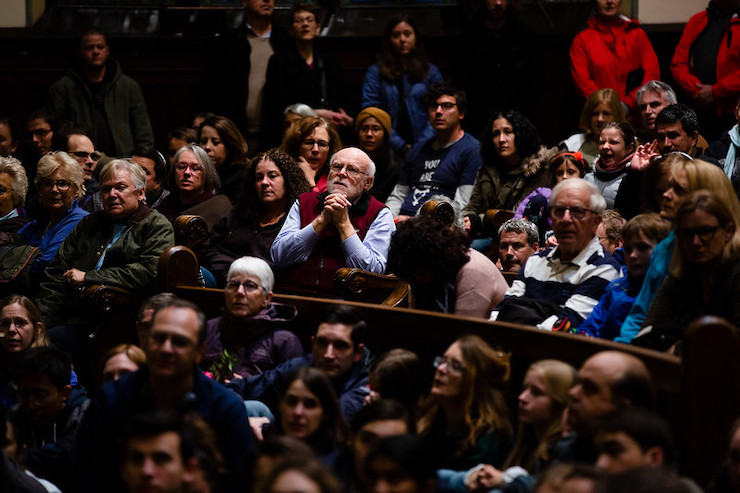 The COP, meanwhile, was created in 1956 when then-President Dwight D. Eisenhower got tired of talking to dozens of Jewish leaders who all claimed to speak for the community. The umbrella organization was intended to present a single voice to the White House on the priorities of American Jews, with an emphasis on Israel and so-called “Jewish defense,” a shorthand for any effort to protect Jews from defamation, violence, and discrimination.

That voice, particularly under the past three-plus decades of leadership of Malcolm Hoenlein, is male, hawkish, and well to the right of most American Jews. Hoenlein, a pro-settlement Israel advocate with the ear of senior political leaders in the U.S., Israel, and beyond, has managed to maintain his influence despite the diffusion and polarization of Jewish organizational life.

In 2019, COP announced that Hoenlein’s reign would end, beginning an extended transition period for the new CEO, the conservative but less confrontational William Daroff, a former director of the Republican Jewish Coalition who most recently served as Senior VP of the umbrella lobby Jewish Federations of North America.

While its name suggests that size matters, many of the COP member organizations are small, often dwarfed by groups denied membership, like the liberal, pro-Israel lobby group J Street. One of those small organizations is the ZOA, which is essentially a one-man band. But, as demonstrated over the past two weeks, Klein manages to punch above his weight — not least because Islamophobia is deeply ingrained in many American Jewish institutions, nurtured and fed by a binary Zionist lens: Jews good (provided they toe the ideological line), Muslims bad. 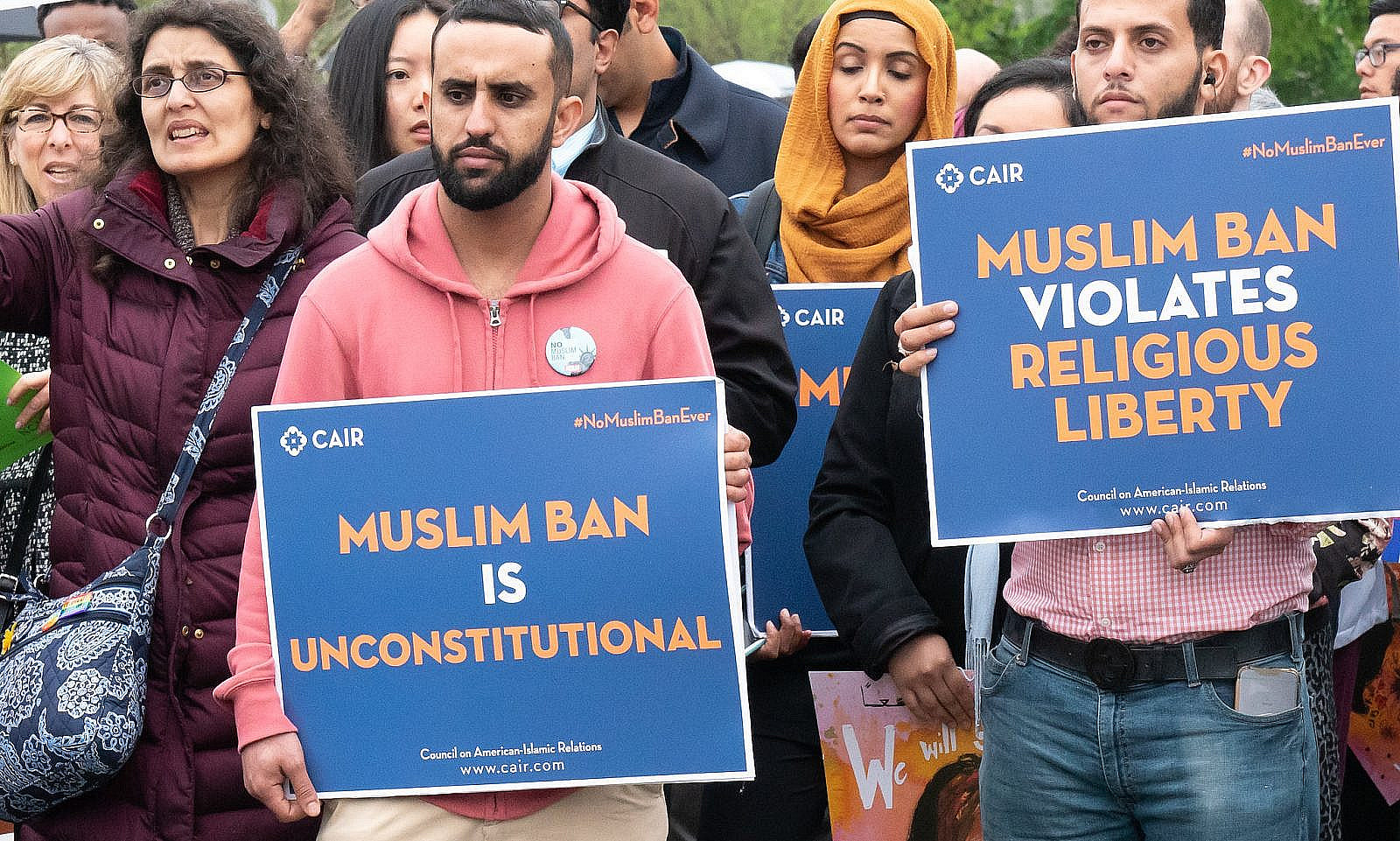 Protesters against the Muslim ban in front of the U.S. Supreme Court as Trump v Hawaii is argued, April 25, 2018. (Victoria Pickering/Flickr)

Saying that opposing Trump’s Muslim ban and supporting Muslim immigrants is “detrimental to the safety of the American (and especially, American Jewish) public,” as Klein did in his letter opposing Lob, is standard and accepted discourse. So is trashing mainstream Muslim organizations, like the Council on American Islamic Relations and the Muslim Public Affairs Council. We see it mirrored in the rhetoric of Caroline Glick, a frequent speaker in American Jewish spaces, who, in opposing Lob’s assent, wrote “it is indisputable that many of the Muslims immigrating to the US are anti-Semitic.”

At the same time, none of the statements supporting Lob and HIAS remarked on Klein’s Islamophobia, even though most if not all reject it. These anti-Muslim beliefs are immune to contrary evidence, including the fact Muslim immigrants have not been behind any of the recent violent attacks on American Jews.

The late-Senator Patrick Moynihan once coined the phrase “defining deviancy down.” He used it to describe how a society can become so accustomed to deviant behaviors that it no longer seeks to correct them. The current drama around HIAS provides an excellent example of how this, and its inverse (where certain “deviancies,” like antisemitism, are ubiquitous), are manifest in Jewish communal spaces. Anti-Muslim bigotry, in the service of “Jewish defense,” barely raises an eyebrow.

At the same time, pro-Israel groups in the diaspora, along with the Netanyahu government in Israel, have successfully changed the definition of antisemitism. Now, anything short of a full-throated endorsement of Zionism is routinely deemed Jew-hatred; all political disagreement is deviancy. Accordingly, Klein and other right-wing actors saw fit to accuse Lob of being insufficiently pro-Israel, despite her holding views well within the mainstream. Together, these shifts in norms attempt to make spaces like the COP impossible for groups like HIAS to navigate. 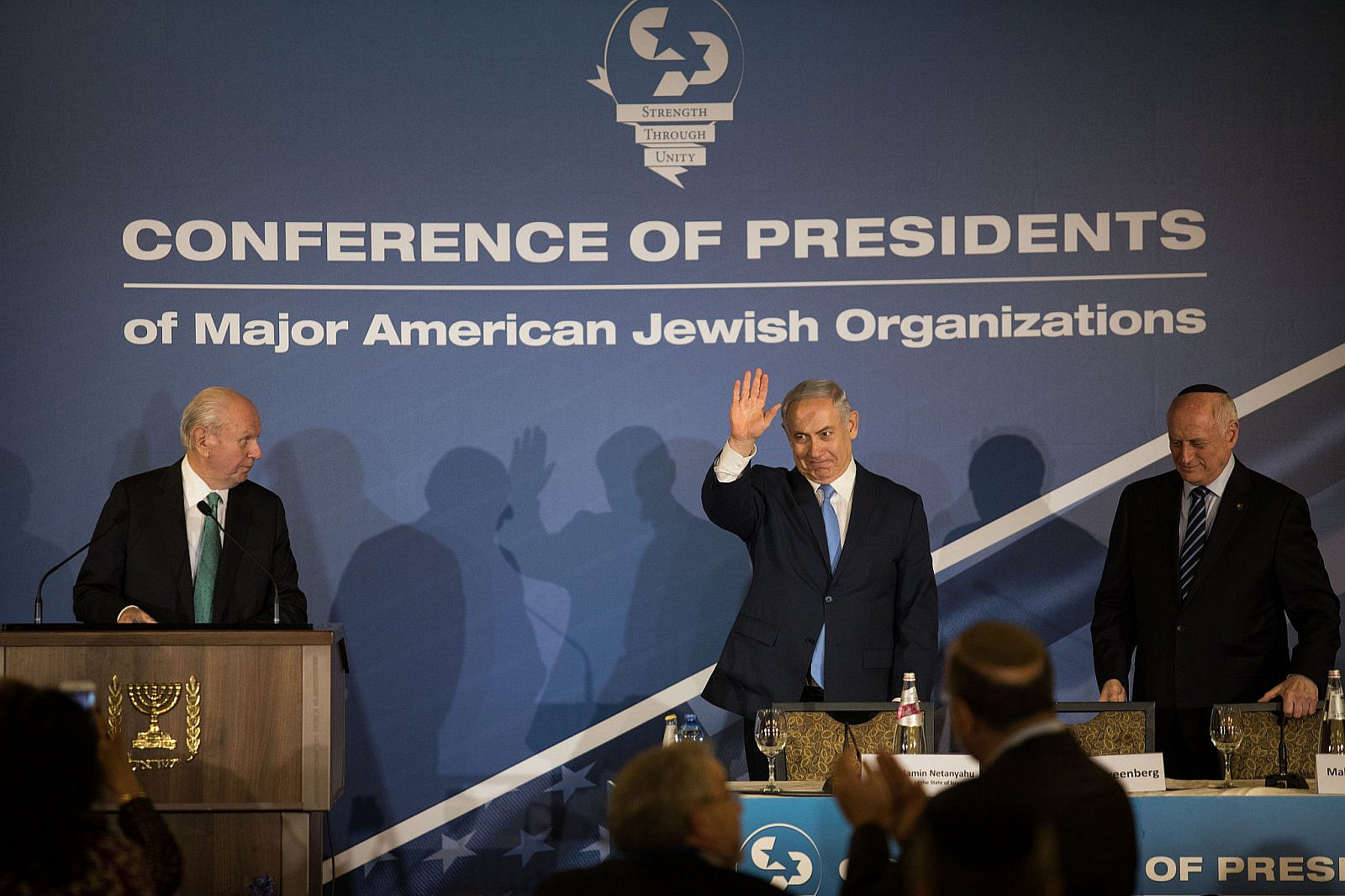 For its part, HIAS has a good explanation for the shift in its work: the organization went from “helping refugees because they were Jewish to helping refugees because we are Jewish.” The value statement here is two-fold. We know what it means to be immigrants and refugees and to need help; we know what happened when the doors were closed. That experience compels us to act even when we no longer need help. But the value can also be detached from experience. This is what we believe as Jews, as explored in our most revered texts, even if we cannot relate to the challenges faced by today’s huddled masses.

Jews and Muslims in the United States have a lot in common. Both are religious minorities with similar dietary rules and unfamiliar holidays. Both are scapegoated, targeted by violence and other hate crimes. Both have had to overcome resistance by neighbors and employers to build places of worship or wear religious garb. These commonalities have led to increased collaboration between the two groups, accelerated during the Trump presidency, whose administration is seen by many in both communities as hostile to their interests and values.

That’s why the controversy over Lob’s appointment, rather than being roundly rejected by everyone to the left of the ZOA, ended in a compromise. By a 31-8 vote on Tuesday, Lob was made chair-elect of the COP board, with the beginning of her term postponed until April 21, 2021. In theory, this means Klein won the battle but lost the war. But in reality, unless Jewish institutions take concrete steps to cast out bigotry and welcome Jewish-Muslim collaboration, and unless Jewish authenticity stops being adjudicated by political disagreements, Klein will win the war, too.

Mik Moore is a writer, producer, and former Jewish communal professional living in NYC. He is the founder and principal of Moore+Associates, a creative agency that specializes in comedy and cultural strategy.