Over-compensated nationalism and the fear of ‘the other’ all contribute to untenable racist attitudes among Israelis toward Palestinians. But racism doesn’t develop in a vacuum and in the context of the current reality, it is entirely unsurprising. 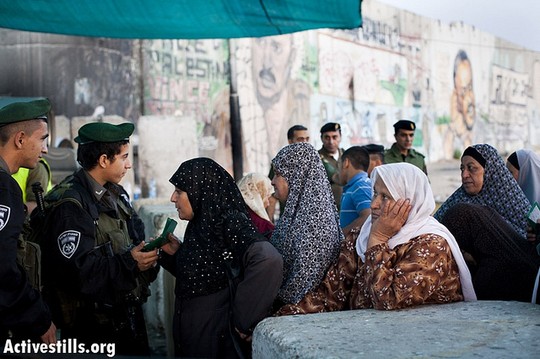 A Palestinian woman shows her ID to an Israeli border policeman, with Palestinian security forces in the background, as she crosses to Jerusalem from the Qalandiya checkpoint outside Ramallah, West Bank, July 20, 2012, on the first Friday of Ramadan. (photo: Oren Ziv/ Activestills.org)

Standing in the cold and dark by the checkpoint on Highway 60, the soldier appeared genuinely taken aback. He had called us off the bus after spotting my friend’s Israeli passport. Since we were in Area C, we were legally permitted to be there. But what were two young Jewish women – one Israeli and one South African-Israeli – doing on a bus with Palestinians? His initial surprise progressed into concern. “Is everything fine,” he asked. “Has anything happened to you?” The question felt extraordinarily ironic considering at that moment we felt more anxious than we had all day.

I started to sense a familiar, creeping unease. I feel it each time my wellbeing in relation to Palestinians is questioned, each time I hear “it must be dangerous.” It is counter-intuitive to discount the fear expressed by this soldier and Israeli society at large; it is tangible and sometimes based on direct acts of violence. However, it is the extent to which Israelis and Diaspora Jewry refuse to interrogate their fear and their refusal to examine their own behavior that I find remarkably problematic.

I gazed warily at the soldier and responded that we were perfect, that we had spent a sad but wonderful day in the incredibly beautiful village of Battir.

My resentment was rising.

I could have left the soldier’s astonishment hanging. But I was unable to bite my tongue, and in the calmest manner possible, I proposed an idea: “Perhaps if you give it a chance, you’ll realize that many Palestinians aren’t dangerous.”

I had clearly provoked him. “Are you saying that Palestinians are humans? But they’re terrorists.”

I lost grip on my flailing composure. “Do you realize that it was anti-Semitism that killed our Jewish ancestors, yet we haven’t learnt? Any similar form of racism is extremely toxic and dangerous, both for us and for Palestinians”.

The soldier started swearing. Laughing. “Hippy. Bloody lefty.” And then he took out his camera and pointed it at me. “Are you even Jewish? Say something.”

“Yes,” I said. “It should not be so radical to think that Palestinians are also humans.”

The situation in Israel and Palestine is occurring with the goal of maintaining a Jewish state, where Jews are provided privileges that are denied to non-Jews. Jews in Israel and the Diaspora must own up to that situation, whether we choose to or not. We need to unapologetically confront the harmful and dangerous facets of our discourse and behavior. We need to take responsibility for the fact that that the army dehumanizes Palestinians. Furthermore, the education system, media and dinner-table conversations in Israel and the diaspora cloak a comfortable status quo with a sense of panic regarding the “Palestinian issue.’

Coupled with over-compensated nationalism translated into Zionism and linked with implicit and explicit racism, the same fear also deters Israeli society and Jews in the Diaspora from understanding the Palestinian historical narrative, from considering the harsh and appalling realities of life under occupation and unequal rule, and from recognizing the complexity of discourse on the Palestinian side. This palpable fear is boosted further by the fact that Israelis are forbidden from visiting parts of the West Bank and all of Gaza, and the massive red signs outside Palestinian towns reading: “Dangerous for Israelis.” Many deplore the Palestinian “propaganda of hate” against us, but aren’t infuriated by our own finely tuned propaganda machine. There is no excuse for the soldier’s comment, but racism doesn’t develop in a vacuum. Put in context, his remark is completely unsurprising.

The forced and embedded silence in Israel is dangerous as it prospers in such a way that we can recognize fear, widespread aggression, and the problematic aspects of nationalism, but they simply feed each other. This has led to a severe and hostile lack of empathy and ability for self-reflection. This has permitted the majority of Israelis to believe that we can defend ourselves, both physically and morally, yet they are abhorrent in their approaches. We will do what it takes to protect ourselves against them, but their world is filled with victim-laden narratives and tactics to destroy.

I implore Jews in Israel and the Diaspora to challenge this accepted racist and defensive rhetoric and take a sincere look within. How would we feel being treated as criminals through racial profiling, being harassed at checkpoints, knowing that soldiers unjustifiably arrested and killed members of our communities, and being woken up to nightly raids? How would we feel being trapped without the freedom to even irrigate our gardens, having our land further damaged and built upon, being taunted or attacked by illegal neighbors, only to be told that we are the security threat?

If we fail to change our discourse and behavior, we will continue to perpetuate a situation that should weigh heavily on our conscience. Furthermore, we will certainly not alleviate any of the fears that we fester. As Dorothy Naor – a woman whose Austrian husband escaped the Nazis to find refuge in Israel – emphasizes: inevitably, we will pay the price.

Maya Schkolne was born in Israel and grew up in South Africa. She just finished a year at the Arava Institute for Environmental Studies based in the Negev, which brings together Israelis, Palestinians, Jordanians, and internationals to find solutions to regional environmental issues and gain a deeper understanding of the Israeli and Palestinian narratives.