Before the first heavy rains hit Israel yesterday, thousands people gathered in central Tel Aviv to mark international Human Rights Day. The occasion brought together various Israeli NGOs and thousands of concerned citizens in the spirit of presenting a face of Israel that supports human rights and progressive values. Placards were carried through the streets supporting gay rights, woman’s rights, African refugees rights and, also, coexistence between Jews and Arabs. Police lined the streets of the demonstration to ensure the safety of the protesters and keep confrontation with the right wing counter protesters at bay (one has to hand it to the right in Israel: a counter protest to human rights?!). If the Tel Aviv International Human Rights Day march wanted to have more authenticity in terms of Palestinian/Israeli coexistence, it should have had more connection with the human rights struggle happening simultaneously in the West Bank.

Only 25 kilometers away from this festive scene, Palestinians were holding their weekly protest against the separation wall and for human rights in the village of Ni’ilin. The protest began as usual, with a speech about the wall and the pain that it has caused the community. This was followed by midday prayers and finally a protest march to the wall itself. Among the Palestinians were a handful of Israeli supporters from Tel Aviv. 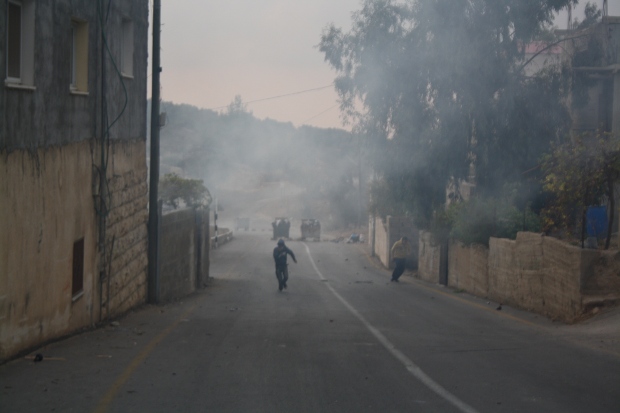 Once at the wall, protesters banged on the gate with stones and sticks. For a second, the banging sounded like the drummers of Sheikh Jarrah, who engage in ‘joy resistance’ by drumming and blowing whistles in their weekly demonstration. The army, on the other side of the wall,informed everyone via bullhorn that the area was a closed military zone and we must leave. It seems that everywhere for the army is a closed military zone and one day, perhaps in the near future, I expect to hear the same bullhorn in Jaffa or Jerusalem proclaiming that the entire land of Israel is a closed military zone. A soldier continued on the bullhorn, saying that they are present to protect the wall. The wall has been built for security reasons yet it requires its own security. Just like the settlements have been said to improve Israeli security but in effect drain security resources.

Unlike the police presence in Tel Aviv, the army in Ni’ilin is present to attack, not defend. It is there to crush the spirit of unarmed resistance in the West Bank. It is there to reinforce that Palestinians are a controlled people living under constant Israeli occupation. As Naomi Chazan began her speech in Tel Aviv (I was following the updates on Twitter while tweeting my own), the army began covering the area of the protest with tear gas. Wave after wave of gas covered the area. Soldiers fired canisters directly at protesters. There was no restraint. Israel’s recognition of International Human Rights Day was starting to take full shape.

The protest ended quickly, as it often does these days in N’ilin, and the five Israelis present drove to Nabi Saleh. There was little discussion about Human Rights Day among the Israelis. They were engaged in a struggle for human rights on the ground and clearly did not have the energy/time to formulate clever theoretical approaches to the issue or grand visions of the future.

The village of Nabi Saleh was under siege by midday. Just as in recent weeks, Israelis wanting to join the demonstration had to take an extended hike through the rugged hills of the West Bank in order to reach the village. Once in the village, the unarmed demonstration was being crushed with live bullets, rubber-coated steel bullets and clouds of tear gas.

Just as the rain hit Tel Aviv marking the end of the Human Rights march, Nabi Saleh was being invaded by IDF soldiers firing live bullets in three directions. The small village, perched on a tired hilltop, was covered in tear gas. Due to the lack of wind, the tear gas did not dissipate into the air; so the entire population of the village was walking around as if in a drunken haze with tears in their eyes.

The siege of Nabi Saleh continued until sunset when the last IDF jeeps pulled out of the village. As soon as the army left, small boys began running around to collect the hundreds of spent tear gas canisters. Watching them scramble to collect them, the absurdity of human rights day in Israel sunk in. As thousands of people held signs in Tel Aviv proclaiming peace and co-existence, roughly ten Israelis made the half- hour drive to Nabi Saleh or Ni’ilin (Bil’in held a demo as well; it had a number of Israelis in attendance). 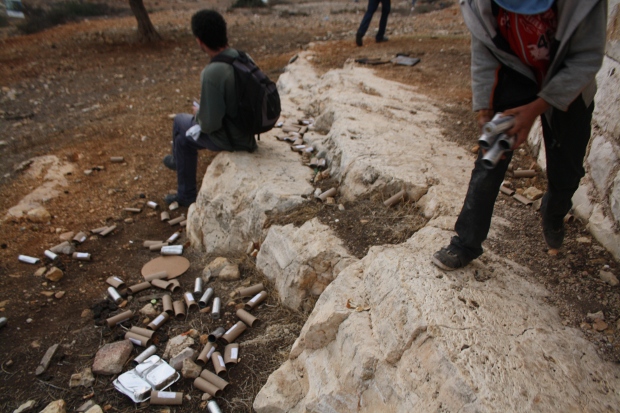 Imagine if that number was not ten but fifty Israelis. If fifty people from the thousands who marched in Tel Aviv had shown up in Nabi Saleh, the reality on the ground would have been different. Even thirty would have had a profound effect on the attitude of the soldiers and on the people of Nabi Saleh who draw profound inspiration from their Israeli and international supporters.

Why is it that thousands of leftist Israelis are able to gather under a public umbrella of human rights, joint struggle and not think about venturing into the West Bank to struggle with Palestinians? One path of co-existence lies in these joint actions of solidarity and since Palestinians are not allowed to enter Tel Aviv it is the responsibility of Israelis to go to the West Bank.The disconnection between human rights in Tel Aviv and human rights in the Occupied Territories was on display yesterday. While the march was a necessary competent of creating a new political space in Israel, it should be only one part of a larger platform which includes Palestinians in the Occupied Territories. Perhaps next year, we will see humans rights demonstrations from Nabi Saleh to Tel Aviv with more Israelis and Palestinians in both places.