Praise for IDF refusenik Tair Kaminer’s “ethics” obscures the fact that an illustrious military service is the Mizrahim’s litmus test for social acceptance and allows the Left to bask in its own self-proclaimed enlightenment. 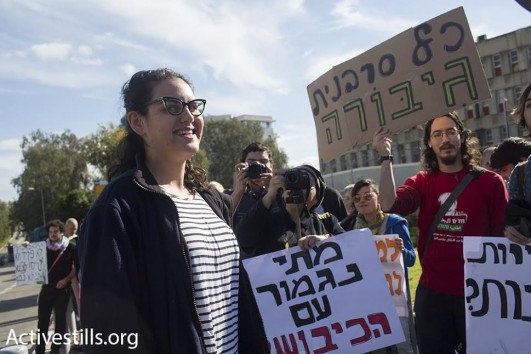 The public debate regarding Tair Kaminer’s refusal to serve in the army illustrates, yet again, the color-blindness of the Israeli Left. Time after time the Left ignores the Ashkenazi-Mizrahi elephant in the room, effectively alienating themselves from the majority of Israeli society. However, it doesn’t prevent the Left’s representatives from praising themselves as the standard bearers of “enlightenment.”

For instance, Haaretz columnist Uri Misgav recently praised Kaminer thus: “Kaminer is a young, ethical person who is politically and socially aware. She spent a year as a volunteer after high school, working with traumatized children in Sderot.” Similar things have been written about Kaminer elsewhere.

It’s interesting to dwell on the meeting between “a young person with values” and the predominantly Mizrahi periphery, in this case the town of Sderot. How do Israeli youths such as Kaminer gain “ethical values”? What is the process that youths in Israel undergo, in which a separation and a hierarchy between an “ethical youth” and the kids who recently disrupted a TV interview and were roundly denounced as “arsim” (a derogatory Hebrew word for riffraff primarily used against Mizrahim), are created?

The Israeli establishment never saw the Mizrahi youth as having the potential to acquire “ethical values,” or a “political and social awareness,” as Misgav put it. Quite the opposite. The Israeli education system, from its founding to the present day, operates on the assumption that Mizrahi youths are less capable than their Ashkenazi peers. In his much-touted series of reports, “The True Face of the Ethnic Demon,” journalist Amnon Levy asked Mizrahi youths what they’ll be when they grow up. Some answered that they’d become soccer players or policemen. Others spoke of the option of serving in the army in a combat unit, which would, maybe, make people “look at them differently.” They were well-aware of the establishment’s racist gaze, directed towards them simply by virtue of being Mizrahim.

This helps explain the high rates of middle- and lower-class Mizrahim enlisting to combat units. They need military service in order to attain a sense of self-esteem and social acceptance. The stark contrast between the military service of most Mizrahim and conscientious refusal, much of it Ashkenazi, is an expression of the privileges Ashkenazim enjoy regarding their present and future status. Unlike the Mizrachi youth, Ashkenazim do not need to struggle to be accepted as proper citizens in the future.

Another important expression of the Left’s blindness in relation to Kaminer’s refusal is the incessant mention of her year of civil service in Sderot, a town whose residents are mostly Mizrahi. For years the Israeli Left has ignored the Mizrahi agenda in relation to development towns like Sderot. Issues like an equal opportunity education system, educational materials about the history of families from Arab and Muslim countries, local authorities with enough resources to develop proper systems of education, culture and leisure – all these are quintessential examples of the privileges of Asheknazim in relation to Mizrahim. Given this situation, Kaminer’s year of civil service contributes much more to her “enlightened” public image than to the town and its residents.

I certainly do not oppose Kaminer’s action in itself. Quite the opposite. More than twelve years ago I refused to serve at a checkpoint east of Ramallah, since its entire purpose was collective punishment. I was sentenced to imprisonment. Since then I refused several more times, until I was released. I support refusal.

However, it is still necessary to ask what are the political conditions that create the Leftist camp and its supposed ethical values (most of it composed of middle- and upper-class Ashkenazim), as against the camp of supposed nationalists (composed of Mizrahim and those whose families immigrated from Ethiopia and the former Soviet Union), who come from a significantly lower-class position. This question isn’t generally being raised by the Left, and particularly not when discussing Kaminer’s refusal. As long as we don’t talk about Ashkenazi privilege, which also creates the “enlightened” Leftist, the entire discussion of what happens in the Occupied Territories will only take place within a highly exclusive group. And that’s bad for all of us.

Translated from the original Hebrew by Tom Pessah.