The Israeli Supreme Court Wednesday dismissed various petitions against the Admissions Committees Law, which allows admissions committees in hundreds of communities in Israel to reject housing applicants based on their “social suitability.”

March 8, 2000 marked a unique moment in Israeli history. In a major decision, the Supreme Court of Israel ruled that the town of Katzir, which was established on state land by the Jewish Agency, could not deny the right of the Arab Ka’adan family to live in the town simply on the basis that they were not Jewish. This was the first time that Palestinian citizens of Israel successfully challenged the legality of “Jewish-only” communities in the state, generating cautious optimism that it could set an important precedent for Palestinian rights in land and housing.

Fifteen years later, on September 17, 2014, these hopes came to an abrupt end. In a 5-4 ruling, the Supreme Court dismissed various petitions filed by human rights groups against the Admissions Committees Law, enacted by the Knesset in 2011. The law allows admissions committees in 434 communities in the Negev and the Galilee (about 43 percent of all towns in Israel) to reject housing applicants based on their “social suitability” and the communities’ “social and cultural fabric.” In effect, these committees are now legally permitted to refuse residency based on any “undesired” identity, including Palestinian, Sephardic, African, gay, religious, secular and others.

The Admissions Committees Law is the Israeli right wing’s response to the Supreme Court ruling in the Ka’adan case. Realizing that marginalized groups were increasingly challenging the state’s discriminatory practices, the Knesset under the 2009-12 Netanyahu government sought to turn Israel’s historical policies against these groups into law. Many Knesset members openly declared that the purpose of these laws was to subdue the “threats” posed by Palestinian citizens to the Jewish character of the state. The authors of the Admissions Committees Law even stated that, though deliberately written in neutral language, its main aim was to prevent Arab citizens from living with Jews.

This objective of segregation is not a new phenomenon in Israel, and has in fact been a central, ongoing practice since the state’s establishment in 1948. Legislation ranging from the Absentees Property Law (1950) to the Negev Individual Settlements Law (2011), along with the policies of the Jewish National Fund, Israel Land Authority and the government itself, operate with the explicit goal of securing maximum and privileged control of land for Israel’s Jewish citizens – a process known as “Judaization.” This runs jointly with the state’s goal of minimizing and concentrating non-Jewish communities in Israel, resulting in the mass confiscation of Palestinian land and the containment of Palestinian towns through discriminatory planning, home demolitions and unequal resource allocation. 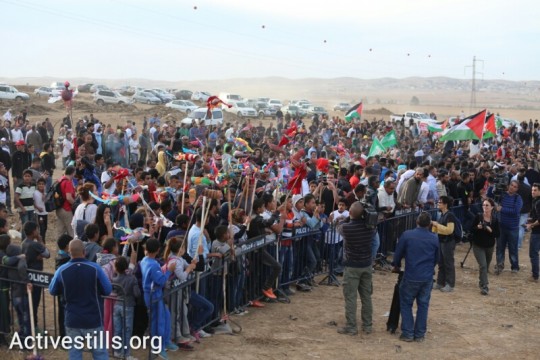 Protesters outside the village of Hura in the Negev, protesting against the Prawer Plan, November 30, 2013. The Prawer Plan, if implemented, will displace tens of thousands of Bedouin citizens of Israel. (Photo: Activestills.org)

However, what makes the admissions committees case significant is that the Supreme Court – the supposed bastion of Israeli democracy – has upheld this clearly discriminatory law, claiming that it could not determine yet if the law violated constitutional rights. Numerous petitions condemned the law from multiple angles, including nationality, race, religion and sexual orientation, but the court swept them aside. More importantly, the court directly undermined its own landmark ruling in the Ka’adan case, overriding one of the few legal decisions that set a precedent for minority rights in Israel and the struggle against state-sanctioned discrimination.

The latest ruling instead illustrates the deteriorating status of Palestinian citizens of Israel at the hands of an increasingly right-wing government and high court. Rather than introducing laws that guarantee equal rights for all of Israel’s citizens, the Knesset has worked to deepen racial inequality and consolidate its discriminatory vision for the state. Meanwhile, the judiciary has allowed the government to carry out this program, choosing not to set precedents on critical cases affecting Palestinian rights. With more discriminatory laws being introduced – including the Prawer Plan Bill, the Contributors to the State Bill, and the Jewish Nation-State Bill – Palestinian citizens and others are left fearing that, despite their best efforts to overturn it, race will continue to be the prime determinant of their rights.

It is therefore up to the public, non-governmental actors and the international community to take a principled stance against this unjust law. Racial separation, especially when engineered by a state, must elicit the same condemnation as other cases have before. Under the segregation laws of the Jim Crow South, gentrification and ghettoization were deliberately used against black Americans in order to keep white neighborhoods economically superior and racially homogenous, the effects of which remain damaging to this day. A more infamous comparison is apartheid South Africa’s Group Areas Act, which legalized the state’s policy of designating land for separate races. Like some of the Israeli law’s proponents today, South Africa’s leaders attempted to sugar-coat their intentions by describing racial separation as a policy of “good neighborliness.” However, such claims cannot conceal the fact that the Israeli Supreme Court’s approval of the Admissions Committees Law has granted legal cover for the principle of segregation and, at worst, has permitted a housing system that disturbingly resembles apartheid.