Last Friday evening, B’Tselem employees were busy sending out press releases and compiling media kits detailing the use of tear gas by the Israeli military in the West Bank.  For the past ten years, B’Tselem has been one of the only Israeli organizations documenting routine violations of military and civilian law by Israeli soldiers.  On Friday, an unidentified Israeli soldier shot and killed an unarmed Palestinian protester, with an American-made tear gas canister, who was throwing stones at armoured military jeeps in the village of Nabi Saleh. The military claims this was an ‘exceptional’ incident but the facts show that it is not.

Due to the great fear of factual discourse regarding the Israeli-Palestinian conflict, there is an unprecedented attack taking place on the free flow of information underway in Israel and the United States. In Israel, organizations like B’Tselem have been targeted with anti-democratic legislation in the Knesset. Even former Israeli combat soldiers brave enough to openly talk about their experience in the West Bank and Gaza are labelled terrorists and marginalized in society. Israel’s democratic safeguards, for the Jewish citizens of the country, are eroding at an astonishingly fast rate. Some might argue that this was bound to happen in a country which deprived the democratic rights of 1.7 million citizens since its inception.

The seamlessness of the occupation, its entrenchment and maintenance, is taking place on both sides of the Atlantic. Presidential hopeful Newt Gingrich’s recent comments regarding the “invention” of the Palestinian people confirm that those who wish to defend or at least ignore Israel’s occupation are increasingly interested in the elimination of the Palestinian people from American minds. Surprisingly, or maybe not, this corrosive thinking is now a component of the US presidential election.

Supporters of Israel’s current polices have renewed efforts to smear journalists and policy pundits who engage in factual discourse on the Israeli-Palestinian conflict. Josh Block, former hit man of AIPAC, was exposed last week as leading a campaign of conservative journalists to smear journalists as “anti-Israel” and “borderline anti-Semitic” if they fail to follow the carefully scripted narrative of Israel discourse in the United States.  Block’s attack strategy specifically targeted liberal policy outfits like the Center for American Progress (CAP) and Media Matters with the intention to paint them as anti-Semitic based on their Israel coverage. Jennifer Rubin, the conservative Washington Post blogger who has endorsed calls for the genocide of the Palestinian people, dutifully used her position to amplify the unfounded calls.

Nowhere is this tactic of intimidation and narrative control clearer than in the work of the self-appointed sage of all things Israel, Jeffery Goldberg. Perhaps it was his time as prison guard at the notorious Ketziot prison during the first Intifada where Goldberg learned the tenacity necessary to defend irrational behaviour in a seemingly rational way. Taken as a whole, Goldberg’s body of work will likely be studied when this conflict comes to an end as one of the most powerful examples of rationalizing the devolution of Israel’s democracy for its Jewish citizens and defending the entrenchment of occupation.

Last week, Goldberg used his prowess to attack American journalist Max Blumenthal. Blumenthal, an award winning journalist with deep knowledge of the conflict, recently wrote a lengthy piece in Al Akhbar on the growing influence of Israeli military tactics in the United States. In the piece, Karen Greenberg, the director of the Fordham School of Law’s Center on National Security, is quoted:

After 9/11 we reached out to the Israelis on many fronts and one of those fronts was torture,” Greenberg told me. “The training in Iraq and Afghanistan on torture was Israeli training. There’s been a huge downside to taking our cue from the Israelis and now we’re going to spread that into the fabric of everyday American life? It’s counter-terrorism creep. And it’s exactly what you could have predicted would have happened.

Goldberg, unwilling to engage in a factual discussion on the content of Blumenthal’s piece, went to Greenberg, acting on a tip from one of his readers. The Israel sage then wrote a post claiming that Greenberg told him in a phone conversation that “she never told Max Blumenthal any such thing [referring to the above quote].” With smoking gun in hand, Goldberg claimed that Blumenthal made up the quote.

Greenberg’s statement to me did not come out of the blue: A book she co-authored with Joshua Dratel, “The Road to Abu Ghraib,” contains a lengthy section on Israeli court rulings authorizing torture and torture techniques refined by the Shin Bet. In a subsequent article, Greenberg and Dratel proposed questions for Donald Rumsfeld about torture. Here is one: “Did your discussions of torture involve consulting experts in Israel..?”

Enter liberal Mother Jones blogger Adam Serwer. Continuing the Blumenthal smear campaign, Serwer proved that the entire thing was without merit and basically amounted to a personal attack for writing a bold piece. In a series of private emails with labor journalist Mike Elk, Serwer admitted that Blumenthal could have quoted Greenberg’s words more or less accurately, but he still does not believe the content of Blumenthal’s piece. The following is a direct quote from one of the emails:

[Karen] Greenberg is a frequent source of mine. She felt misquoted/taken out of context, and she doesn’t have the knowledge to back up the claim Max attributed to her. Even if Max quoted her words accurately, the underlying claim that Israeli interrogators trained the US in torture isn’t proven. I have no idea if it’s false or not, but it’s not proven, because (a) Max didn’t prove it and (b) the person he quoted to substantiate the claim says she doesn’t know if it’s true.

Jeffery Goldberg has failed to provide a comment on the developing story. I would not hold your breath for one either – that is not his function here.  Serwer’s piece, not unusual for the likes of Goldberg, is notable since it raises important questions concerning the editorial line of Mother Jones on such a sensitive topic. In light of Serwer’s admission, journalist Mark Ames asks the right questions about Mother Jones:

Is Mother Jones now in the business of smearing journalism that dares to investigate the ties between U.S. police departments responsible for violently crushing the Occupy protests, and Israeli occupation forces that violently repress Palestinians? What are the venerable labor-left magazine’s editorial guidelines and ethical standards?

A coordinated international effort is underway to smear and discredit those journalists and policy people who engage in factual discourse regarding Israel’s current policies in the West Bank and their effect on the country’s democratic institutions. Everyone from Israeli NGOs to Jewish American journalists bold enough to draw attention to the policies used to maintain and profit from Israeli occupation are legitimate targets. Given the absence of facts to support Israeli positions vis-a-via the Palestinians, narrative control is the only mechanism that Israel and its supporters can activate. Facile attempts to paint skeptics as anti-Semitic (Josh Block’s attacks on CAP, e.g.), or smear campaigns against journalists (Goldberg’s attacks on Blumenthal, e.g.) serve to demonstrate the precarious position of those defending irrational and even suicidal Israeli policies.

For the Israeli government and its people, the ultimate objective in all of this is maintenance of the status quo. Continued entrenchment of occupation, low levels of violence from occupied Palestinians and increased revenue from the mighty Israeli military-industrial complex must be protected. Those that detract will be side-lined, outcast and ignored at all costs, including the destruction of Israel’s democratic standards for its Jewish citizens.

Ultimately, the narrative is changing and Israel is failing to catch up. The reality of the occupation is becoming impossible to conceal in the social media age. The smug and heartless reaction of various Israeli army officials on Twitter to the killing of Mustafa Tamimi is the most recent example that Israel has lost its moral compass. Attacks on credible and courageous journalists like Max Blumenthal will intensify as McCarthyite smear campaigns are the last option for the defence of Israel’s current policies. All the while, Israel’s moral fabric will continue to disintegrate in plain sight. Unsustainable is an understatement.

An update on this story by Max Blumenthal:

Serwer’s source: a Holocaust survivor denier
Why did Serwer decide to publish his smear in the first place? Who inspired him to publish such a baseless screed? I have learned that Serwer’s original source was a small-time pro-Israel activist named Zachary Novetsky, who is better known as the full-time Twitter troll @ZachofArabia.

Novetsky is a Fordham University student whose anti-Palestinian sentiments are well known, and who once claimed that Hedy Epstein, a Palestine solidarity activist who escaped Nazi Germany before losing her entire family to the Holocaust, was not in fact a Holocaust survivor. Indeed, Serwer was taking his cues from a notorious nut job; a frenetic Twitter troll and Holocaust survivor denier who any self-respecting journalist would have immediately shunned.

After the publication of my piece, Novetsky said he approached Greenberg on campus to confront her about her statement. Then he approached journalists with the claim that I had “fabricated” Greenberg’s quote. “You know Blumenthal fabricated that Karen Greenberg [quote],” Novetsky wrote to a journalist who requested to remain anonymous [see embedded images]. “I asked her, she said it’s ‘misattributed’ and she’s ‘not happy about it.’” 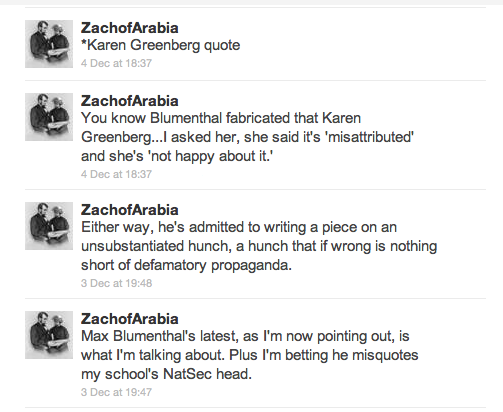 It is hard to know what Greenberg meant by “misattributed,” but she certainly did not tell Novetsky that I invented her quote, as he claimed. Neverthess, two days later, Novetsky queried Serwer on Twitter, claiming to him (before referring to me as “Maxi-pad”) that my quoting of Greenberg was “a lie.” “Wait you mean she literally DIDN’T say that? Not that she’s wrong?” Serwer breathlessly responded to Novetsky. “Literally,” Novetsky assured him [see embedded Tweets below]. After being egged on by Novetsky, aka @ZachofArabia, Serwer went straight to Greenberg to extract the quote he sought. 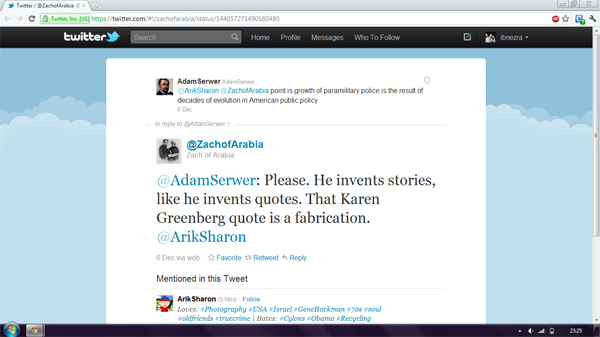 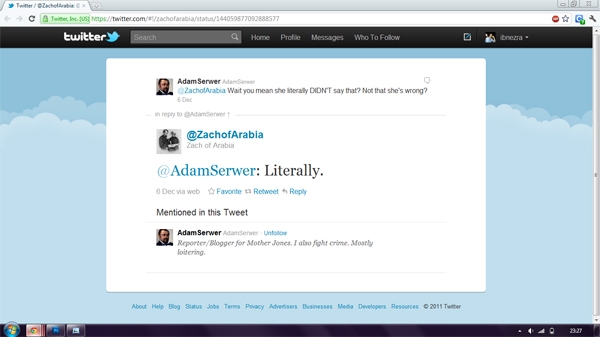 Serwer’s motives are now out in the open. He never intended to engage in a serious appraisal of my reporting on the Israelification of local law enforcement. His goal was the same as his source, the hasbarist Novetsky, who routinely uses Twitter to harass me and other critics of Israel with juvenile, insulting remarks — “Maxi-pad.”