The police claim Rahik Shagiya Muhammad Yousef approached them at a checkpoint with a knife. A new video reveals that the officers fired 12 bullets, killing her when she no longer posed a threat.

On Wednesday morning Israeli Border Police officers shot Rahik Shagiya Muhammad Yousef at a checkpoint in the northern West Bank. Yousef, 19, from the village Asira A-Shamaliya near Nablus, was shot after she allegedly approached the officers at Tapuach checkpoint and pulled out a knife. According to the Police Spokesperson, the officers reportedly called on Yousef to stop and fired warning shots in the air before shooting her.

A video published by Israeli news site Walla!, however, reveals that the police statement left out a key piece of the story. According to the video, four Border Police officers continue to shoot at the young woman from close range as she lies on the ground and poses no threat.

Israeli police spokesperson Luba Al-Samri distributed a photo to reporters in which Yousef is clearly seen holding a knife. As opposed to the photography, the knife could hardly been in the video. And while the video is not high quality enough to prove a thing, it certainly raises serious questions. 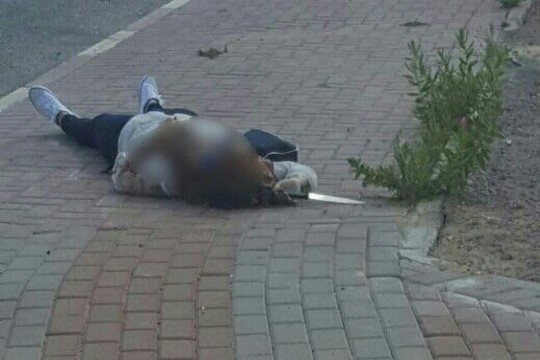 This is not to deny the likelihood that Yousef was looking to stab the officers, or perhaps using the attack as a means to commit suicide — a motivation for a good number of attempted attacks over the past year. But there is no doubt that such a massive use of force, when Yousef was already lying on the ground with no way to harm the officers, merits serious investigation.

Israeli police issued the following response to the video:

From our initial investigation of yesterday’s terrorist attack, the officers called on the terrorist to stop a few times, while firing warning shots in the air. The terrorist ignored these warnings, pulling out a knife just meters in front of the officers and began to move toward them. The video presents a partial picture of the event, and does not show the terrorist moving toward the officers while brandishing a knife and endangering their lives.

The police further stated that the video shows that the police ceased shooting “immediately after she was neutralized.” A closer look at the clip, however, reveals precisely the opposite. The police added that the incident was under investigation.

Not an isolated case

These kinds of incidents have become common ever since the latest wave of violence broke out. On September 21, a 13-year-old Palestinian girl marched toward the checkpoint [Hebrew] adjacent to the Israeli settlement of Alfei Menashe. When she did not respond to calls to stop, she was shot. Despite duplicitous reports [Hebrew], the girl was not holding a knife and posed no threat to the shooters. The killers were never held responsible.

In June soldiers from the IDF’s Kfir Brigade shot and killed Ansar Harsha, 25, a mother of two from the village of Qaffin, near Tulkarem. According to the IDF Spokesperson, Harsha had “attempted to carry out a stabbing attack adjacent to Einav checkpoint: no one was hurt; the terrorist was killed.”

Photos that we uncovered from the video that captured the event — the same video the IDF refuses to release — show disproportionate use of force. According to the photos Harsha had approached the reinforced army pillbox, in which soldiers are stationed well above the ground (and thus she posed them no threat). Two soldiers stepped down from the pillbox in her direction, shooting her in the upper half of her body while she stood only meters away.

On Wednesday, April 27, Maram Salah Hasan Abu Ismail, a 23-year-old mother from A-Ram in East Jerusalem, and her younger brother, Ibrahim Salah Taha, 16, from Beit Surik, were shot to death at Qalandiya checkpoint. According to the police, the two entered the area intended for vehicle crossing. The police spokesperson later reported that “police and Border Police officers stationed at Qalandiya checkpoint noticed a man and a woman walking toward the checkpoint intended for vehicles alone, when the woman’s hand was in her bag and the man’s hand was behind his back, holding onto something that raised the police’s suspicion.”

Not long after that it turned out that the police’s version was wrong, and that the shooters were private security guards. Testimonies published in May on the incident raise suspicion that at the very least, the killing of Ibrahim Salah Taha was not justified, and that he was shot a number of times without posing any threat to the guards at the checkpoint. It is likely that shooting his sister was also unnecessary. The police refuses to release the video that captured the double-killing, and placed the entire story under gag order for months, until it was recently temporarily lifted.

In February Border Police officers shot and killed Muhammad Abu Khalaf, 20, after he carried out a stabbing attack at Damascus Gate in Jerusalem. Footage captured by Al Jazeera showed that police officers shot him a number of times, even after he was already lying on the ground. In August the Department of Internal Police Investigations announced that it would not even open an investigation into the incident. 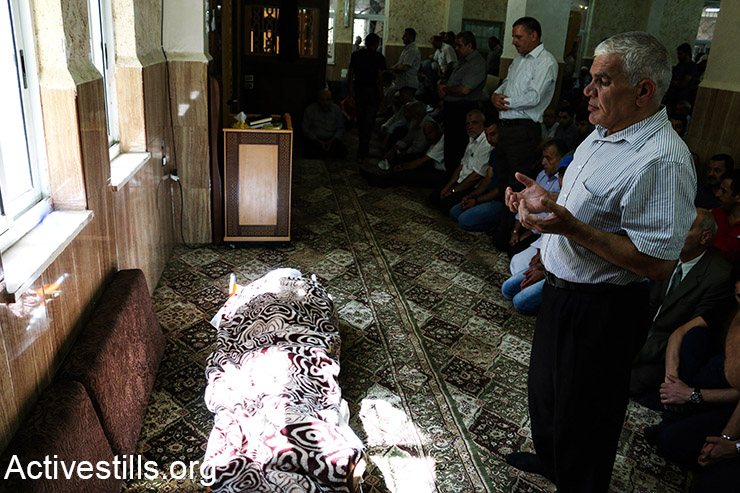 The body of Hadeel al-Hashlamon, a 18-year old Palestinian woman who was shot by Israeli soldiers at a checkpoint in the West Bank city of Hebron, surrounded by relatives during her funeral, September 23, 2015. (Activestills.org)

On November 23, 2015, two Palestinian teenage girls, 14 and 16, stabbed a Palestinian passerby near Jerusalem’s Mahane Yehuda Market, lightly wounding him. A police officer who arrived on the scene shot one of the girls, then the other one, before returning to the first girl and shooting her again as she lay wounded on the ground. The 14-year-old died of her wounds.

The first incident of this kind in the latest wave took place on September 23, 2015 when Israeli soldiers shot and killed 18-year-old Hadeel al-Hashlamon at a checkpoint in Hebron. According to eyewitness testimonies, the soldiers continued to shot even after she was on the ground. The IDF refuses to release footage of the incident. An army investigation ruled that her death was unnecessary, yet the shooters were never held accountable.