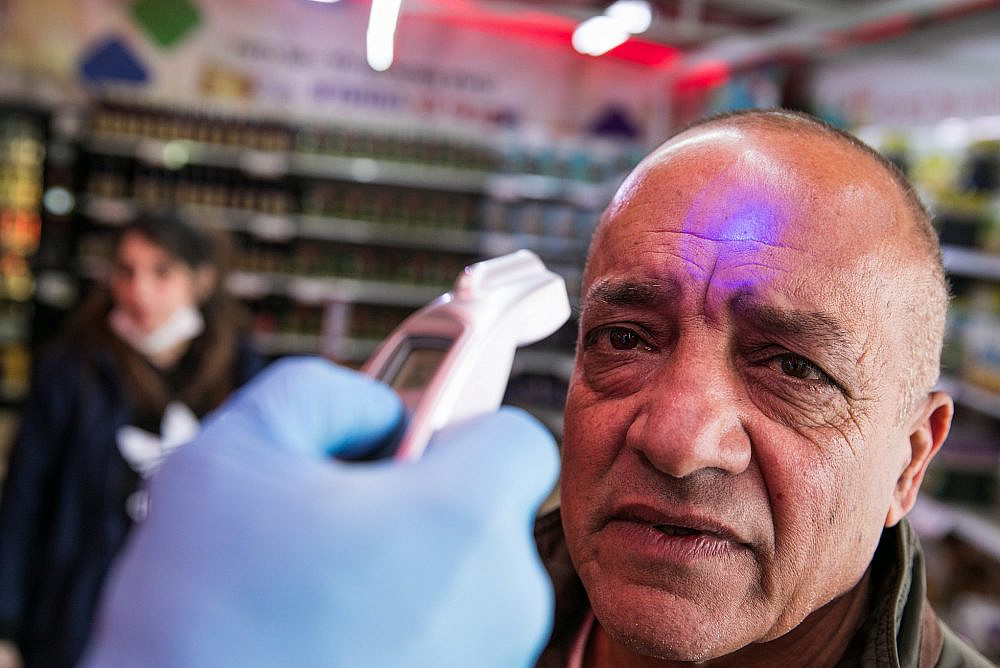 A security guard checks the temperature of customers to identify if they have fever in a Rami Levy supermarket in Jerusalem on March 18, 2020. (Olivier Fitoussi/FLASH90)

Governments worldwide are turning to extreme measures to curb the spread of the COVID-19 virus, adopting policies that would have seemed impossible or intolerable to the general public a mere month ago.

Schools and universities across the globe are being closed. European countries such as Spain, Italy, and France have imposed curfews. The U.S. and UK have approved enormous budget commitments that, just two weeks ago, would have been condemned as fanciful or socialist.

In addition to these measures, many governments are adopting technological responses to aid them in the fight against the coronavirus.

On Wednesday, Israel’s Health Ministry announced that it had begun using mass surveillance technology to monitor the movement of people who are confirmed or suspected of being infected with COVID-19. The program is being facilitated by the Shin Bet, Israel’s domestic intelligence service, which is known for tracking security suspects inside Israel and in the occupied Palestinian territories.

As of Wednesday evening, 400 people have been informed by text message that their movements were being traced, stating that they had come into contact with a carrier of the virus and must therefore self-isolate.

Israel is not alone in searching for high-tech solutions to the global pandemic. 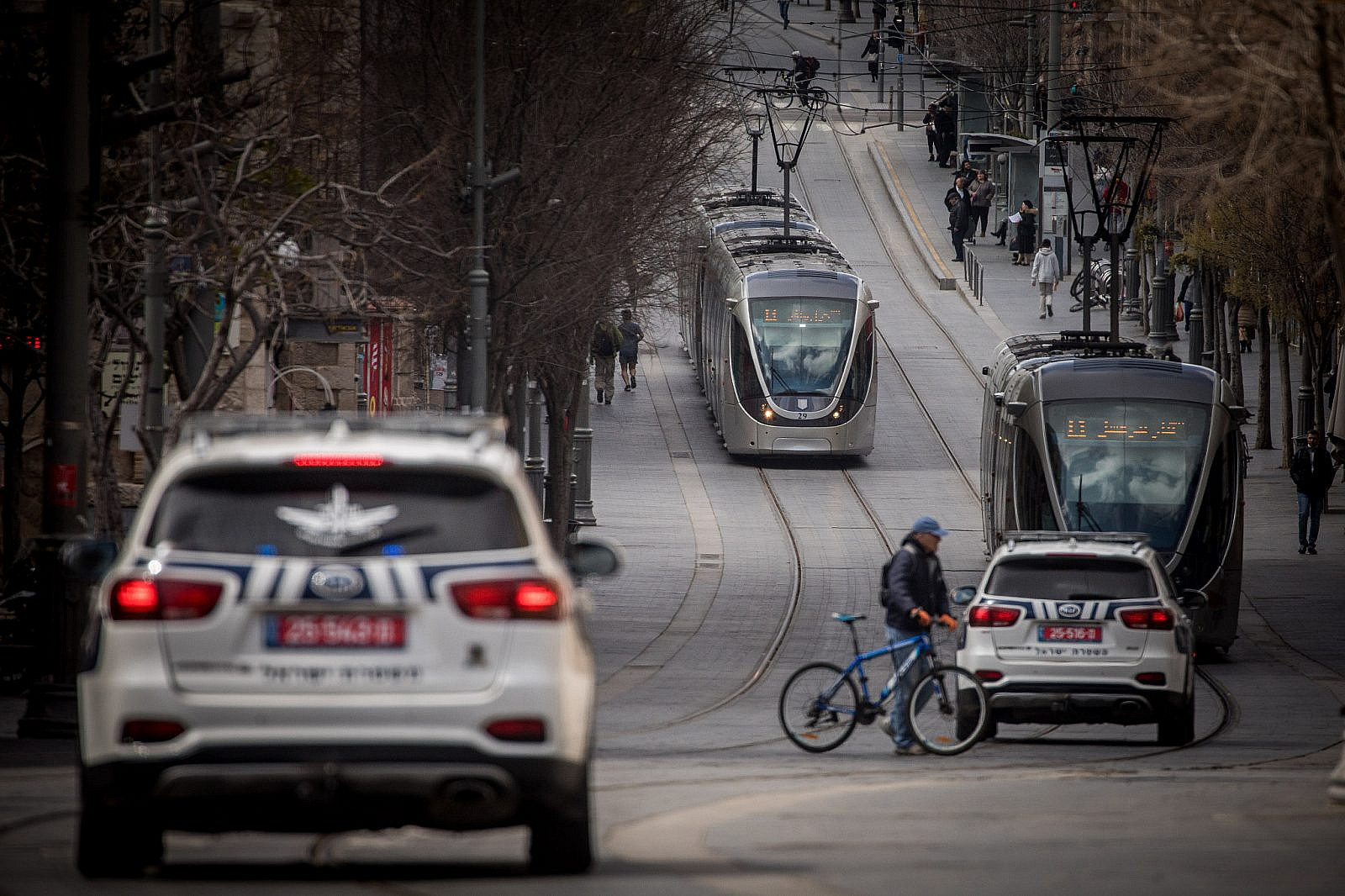 Russia is currently using artificial intelligence technology to identify people with high temperatures or who are breaking curfews, spreading misinformation on social media, and even emptying shelves in supermarkets. Spanish police are utilizing drones to monitor and enforce curfews. Telecommunications companies in Austria and Germany have handed over anonymized geolocation data of customers to their governments.

A wave of new phone apps for monitoring the virus’ spread and for disseminating official information are also being used globally; but some of these tools have run into problems. In South Korea, for example, concerns over privacy were raised when details of individuals’ private lives, such as those involved in extra-marital affairs, were revealed through government emergency text messages.

To date, only China and Iran, and now Israel, are known to officially be using state-level electronic surveillance techniques to tackle the coronavirus. This has stirred some controversy over how Israel, which claims to be a democracy, is implementing practices favored by authoritarian regimes.

The controversy is not over the fact that Israel actually employs such techniques, but that it is now turning them on Jewish citizens, says Nadim Nashif, the executive director of 7amleh, a Palestinian digital rights organization. The Shin Bet, he explains, has a long history of using this technology on Palestinian citizens of Israel and on Palestinian residents of East Jerusalem.

Still, concerns over individual privacy in light of the government’s moves are very real, says Nashif, arguing that controlling a person’s phone amounts to controlling their entire environment. “It is not just about geolocation; it is cameras, microphones, the content on that phone, the people around us. Everybody is exposed.” 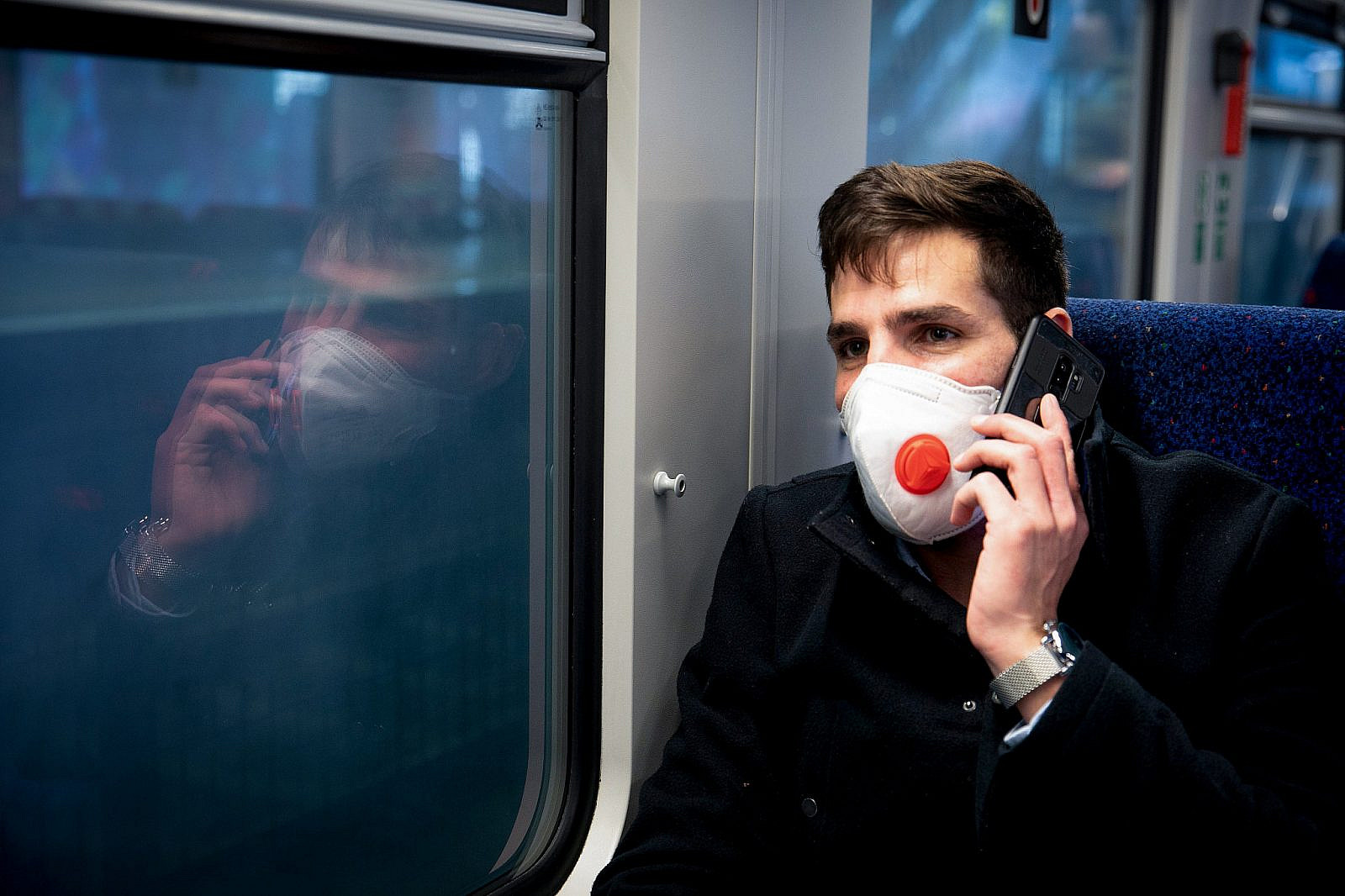 A man wears a face mask for protection from coronavirus as he takes the train to Haifa, on March 17, 2020. (Yossi Aloni/Flash90)

Although the Israeli government declared that its surveillance powers would only be used to access geolocation data, concerns remain due to discrepancies between the government’s statements and how the policy is being implemented.

“The government approved in the dead of night the emergency regulations, even though the [Knesset] Foreign Affairs and Defense Committee began to discuss the issue yesterday – without being given the opportunity to implement it in a serious and complete way,” wrote Gabi Ashkenazi, the chair of the committee and a leading member of the Blue and White party, on Twitter on Tuesday.

(Ashkenazi, through a representative, declined to be interviewed for this article or to answer questions on how Blue and White’s policy on COVID-19 would differ from the Likud’s if it were in power).

In most democracies, checks and balances, transparency, and proportionality of state policies are considered key to ensuring the legitimate implementation of such powers. Yet in Israel, the government is attempting to compromise this oversight: the Knesset has been closed on the orders of Yuli Edelstein, the parliamentary speaker and member of the ruling Likud party, while the legality of the surveillance program is being challenged in the High Court of Justice (Update: the court issued an interim order Thursday evening that will bar the tracking policy unless a Knesset monitoring committee is established by March 24).

Beyond the concerns over privacy and accountability, critics are also worried about the long-term implications of the Shin Bet’s actions during this crisis.

Pointing to the U.S. Patriot Act and the wide-ranging human rights abuses perpetrated by the American government after 9/11, Eva Blum-Dumontet, a senior research officer at Privacy International, says she fears what will happen after the coronavirus emergency ends. 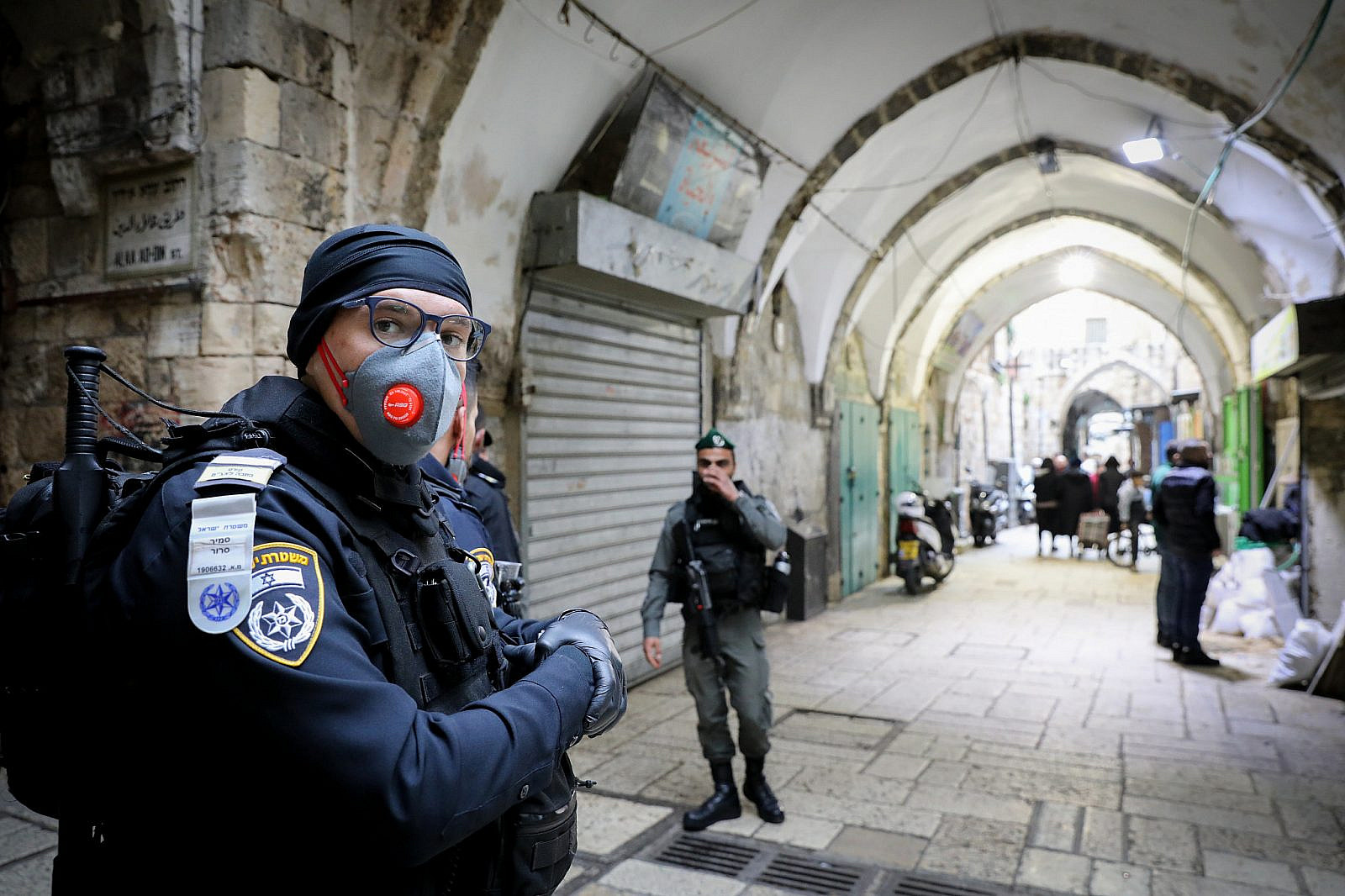 Israeli border police wear face masks for protection from the coronavirus as they stand guard in the Muslim quarter in Jerusalem’s Old City. March 15, 2020. (Yossi Zamiri/Flash90)

Israel’s surveillance measures are being enacted without a defined end point, raising the question of when they will cease, and who will decide so. “They have been passed without any form of control… this is something we are hugely concerned about,” she says.

Other policies with less risks to civil liberties have proven to be helpful in halting the spread of the virus, adds Blum-Dumontet. These include financial aid for those out of work due to national closures, community support, strong and clear governmental messaging, and above all, a robust health service. “Before we jump to very harsh surveillance measures that will have lasting impacts on our human rights… [We should examine] the measures we can already take,” she urges.

However, it will arguably be difficult to reverse the government’s trend. A CEO of an Israeli company specializing in artificial intelligence-led video analytics of CCTV cameras, who requested anonymity due to their work with government contracts, says that authorities rarely rescind security powers once they have received permission — and many Israelis know this. “In my opinion, most citizens do not have anything to hide, and if this is something that can help control the virus and return us to a normal way of life, everybody will accept it,” they said.

Innovative technology, state security, and start-up companies have a rather symbiotic relationship in Israel. This has been true in the country’s relations or hostilities with neighboring states, with the military occupation of the Palestinian territories, and now is also true in the war against the coronavirus.

In recent days, the Israel Innovation Authority, along with other government bodies, called for submissions for funding from technology companies with novel solutions to the virus.

These could include medical companies with direct functions for halting the spread, or platforms helping indirectly, such as a communication apps enabling the elderly to stay in touch with family. Surveillance and security platforms helping the government enforce quarantine codes could also be considered.

While the CEO who spoke to +972 was not aware of specific high-tech companies working with the Israeli government against COVID-19, they acknowledged that such projects would initially be confidential but are likely to be happening already. 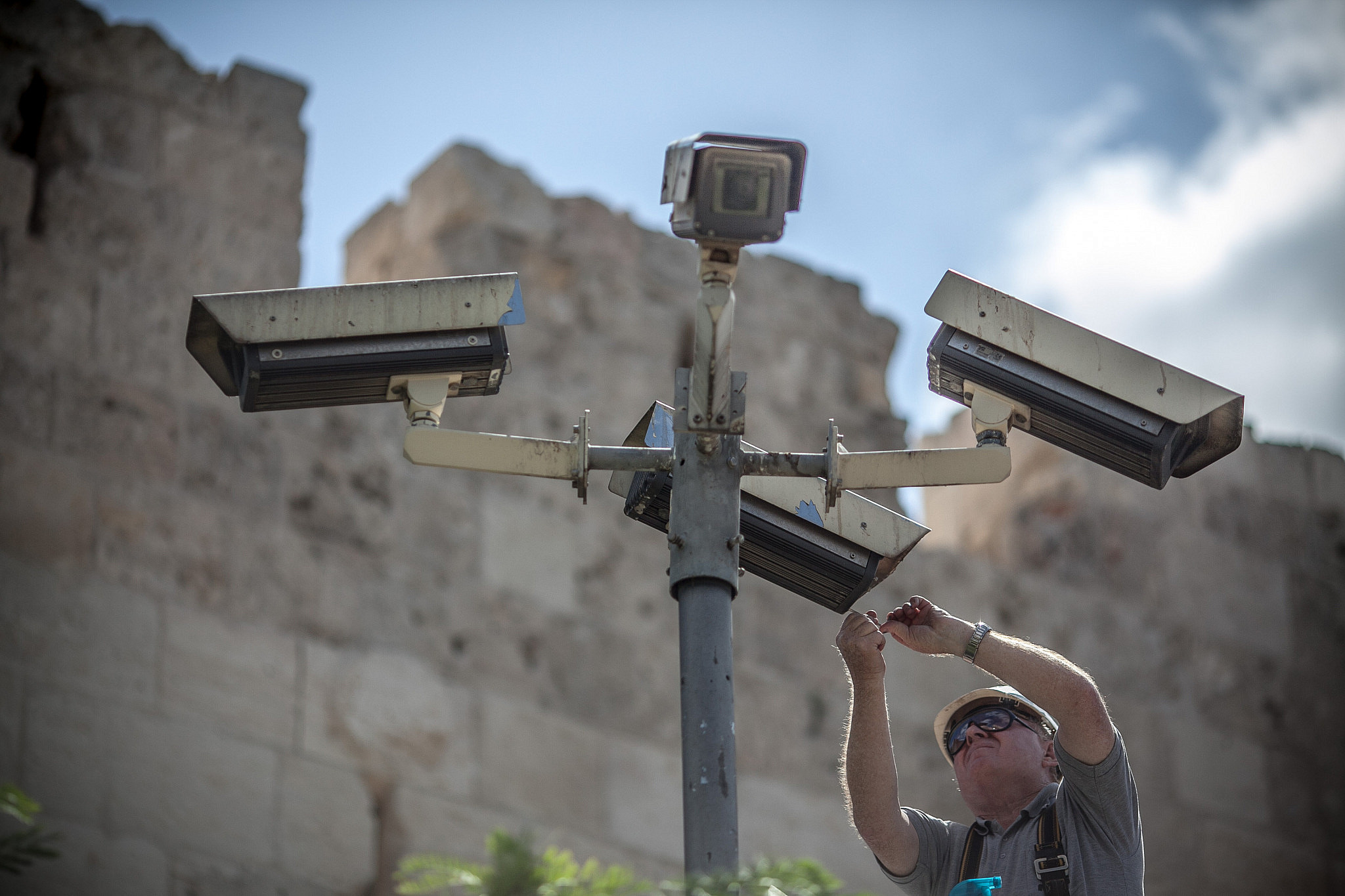 A technician fixes security cameras located near the Old City of Jerusalem. May 20 2012. (Noam Moskowitz/Flash90)

The CEO pointed to their own company and its internal discussions over the last week, regarding how the government could make use of its technology to counter the virus’ spread.

For example, the company’s software, which is designed to monitor camera feeds and spot suspicious individuals, could be quickly re-calibrated to identify social behavior that the government wishes to clamp down on, said the CEO. The technology currently searches for humans carrying weapons, but the algorithm could instead alert authorities when people are congregating in large numbers or are standing too close together, they noted.

Such applications may be useful in helping to contain the coronavirus, but these too come with heavy risks. There is a big difference between the private sector contributing to the discovery of a vaccine, and collaborating with the state to watch its citizens.

Chinese technology firms Baidu and Megvii, for example, are supporting their government’s fight against the virus by implementing AI-assisted monitoring systems, which many fear will continue to be used for authoritarian purposes. Will Israel see similar partnerships soon?

One Israeli firm, the NSO Group — infamous for its offensive cyber tools popular with oppressive regimes around the world — has already offered its services in the fight against the coronavirus. And for some, this is cause for concern.

“The problem that we often see in public-private partnership is that these companies shape the discourse around what needs to be done as a matter of national security,” says Blum-Dumontet. Decisions on how to cope with COVID-19 should be made by democratically-elected governments in consultation with health officials; private companies involved in surveillance, or businesses with questionable human rights records, should not be setting the response, she argues.