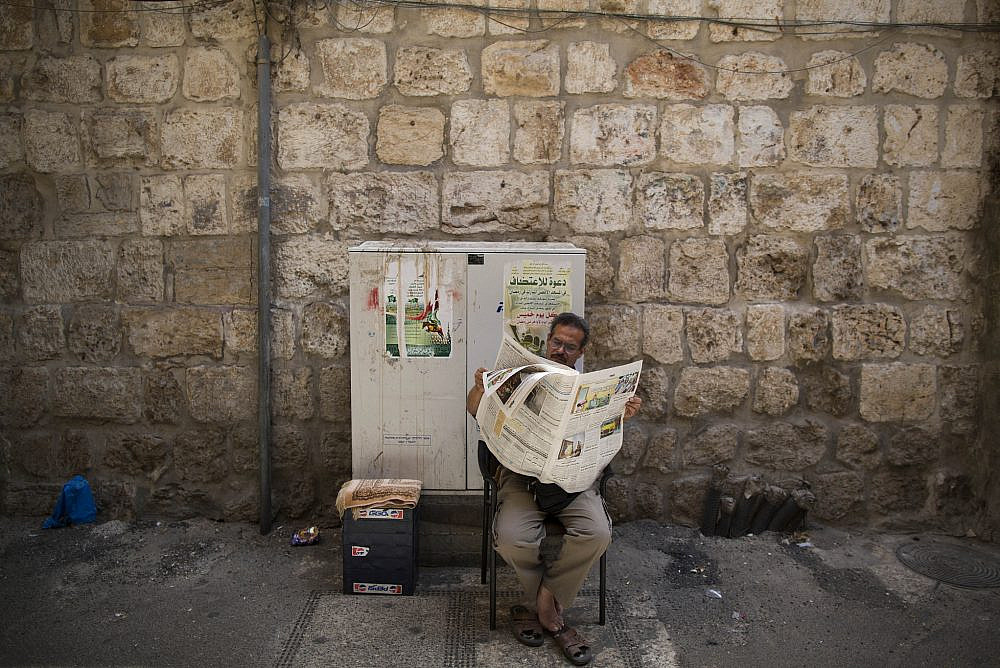 A Palestinian man reads the newspaper as he sits outside his souvenir shop in Jerusalem's Old City, September 13, 2013. (Yonatan Sindel/Flash90)

Stuck at home because of the coronavirus? Searching for a stimulating activity, or just anything interesting to pass the time?

We’ve got you covered!

We’ve collected some of our favorite essays and special series over +972’s decade-long history, offering thought-provoking memories and reflections on politics, society, personal journeys, and more from Israel-Palestine.

Haggai Matar’s award-winning, twelve-part series exploring the history, debates, and impact of Israel’s separation barrier in the occupied West Bank, a decade after its construction was announced. (Apr. 9 – Aug. 10, 2012)

“Looking at it from here, for just one minute, the whole project of the wall appears to be nothing more than an absurdity…”

The long road to Bethlehem

Mya Guarnieri Jaradat traces her personal journey as an American-Israeli living in an occupied city, navigating love and society with her Palestinian partner, and carrying the weight of the conflict after moving to the U.S. (Mar. 28 2015 – Apr. 22, 2016)

“As Mohammad and I take our seats on the porch [in South Florida], he smiles and shakes his head. ‘It’s like Dheisheh here,’ he says. ‘We can’t escape Palestine.’” 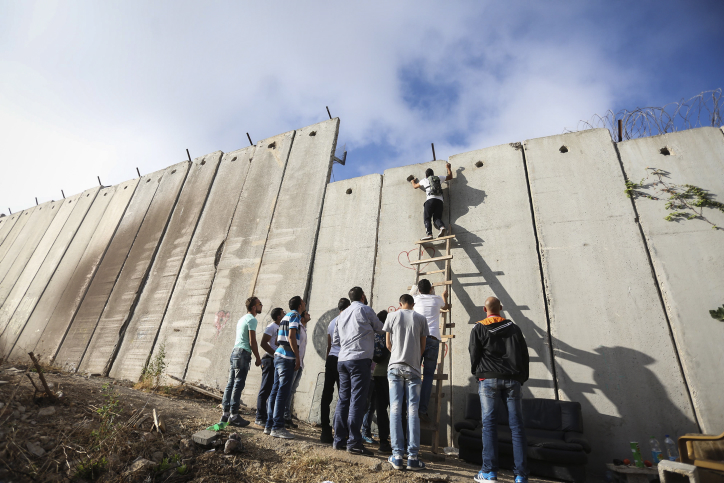 Palestinians try to climb over the separation wall at the Qalandiya checkpoint between the West Bank city of Ramallah and Jerusalem on their way to attend the last Friday prayers in Jerusalem’s al-Aqsa mosque during Ramadan, Friday, July 1, 2016. (Flash90)

Samer Badawi – who reported for +972 from the Gaza Strip during Israel’s “Operation Protective Edge” – reflects on Gaza’s experiences during the war and its place in the Palestinian struggle. (Dec. 30, 2014)

“Although the Gazans I spoke to are proud to inspire solidarity and resistance, that mantle is heavy and no one would carry it for its weight alone. The point is freedom, not suffering.”

‘East Jerusalem youth no longer distinguish between life and death’

Orly Noy speaks with Abed al-Karim Lafi, a former head of the parents’ council in East Jerusalem, on how the Israeli occupation is breaking and radicalizing the city’s Palestinian youth, including by neglecting their schools. (Oct. 15, 2015)

“Who protects the Arab child? The father? The poor father can’t even protect himself. So they [the children] have lost all hope in adults, in life, and in peace.”

Nabi Saleh is where I lost my Zionism

Lisa Goldman reflects on the Israeli army’s propaganda against the weekly demonstrations in the Palestinian village of Nabi Saleh, and how the struggle there radicalized her politics. (Dec. 24, 2017)

“And then I would go back to Tel Aviv and be told by my friends that I could not have seen what I saw, because ‘our soldiers’ do not behave that way.” 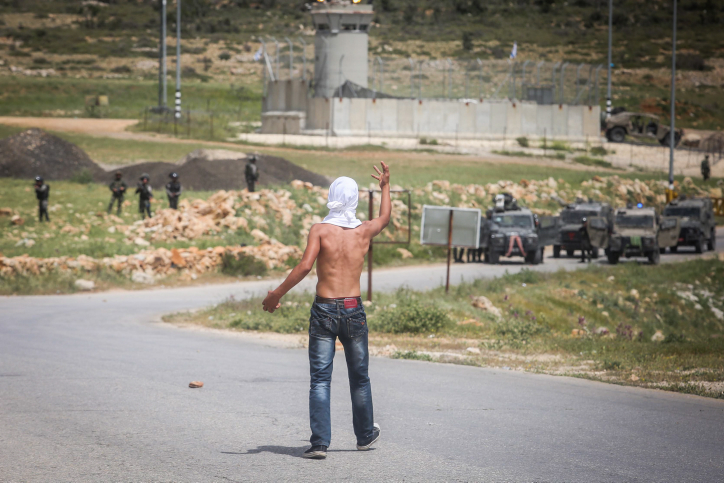 Waiting for her cry: The day that changed my life forever

Ami Kaufman and his daughter Emma barely survived when a construction crane collapsed onto their car in Tel Aviv; he recounts the harrowing seconds of that day, and how he has dealt with the trauma and pain it inflicted. (Dec. 31, 2017)

“And here it is. This is the scariest moment of my life. My hand reaching out, fingers stretched, not knowing what I will see when I open the door.”

Yuval Ben-Ami writes a three-week travelogue as he encounters people, towns, and landscapes along Israel’s original 1948 borders, long before the state expanded its territories through occupation. (Apr. 6 – Apr. 30, 2012)

“The degree to which we treat the various lines as proper borders varies from Israeli to Israeli. All in all we can’t say we know where our borders run, or what the hell is going on.” 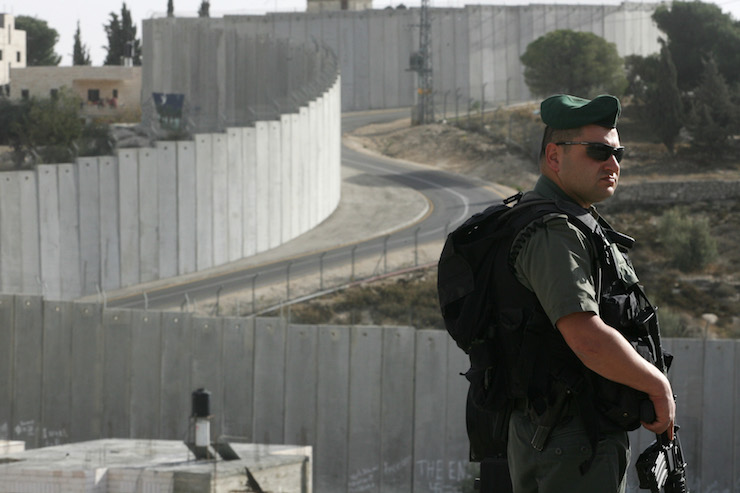 Suha Arraf investigates the criminal syndicates that have effectively created a ‘state within a state’ in Palestinian towns and villages in Israel, and why police have done little to counter them. (Jan. 20, 2020)

“The police stood by watching from above and intervened only in events that could undermine state security… It has no interest in ordinary civilian matters. As far as they are concerned, the Arabs can kill each other.”

Settler violence: It comes with the territory

Larry Derfner investigates the local and international impunity enjoyed by Israeli settler violence in the West Bank, which has always been an integral part of the occupation and of colonial movements worldwide. (Jan. 21, 2014)

How one hilltop became an incubator for Israeli settler violence

Natasha Roth-Rowland traces the growth of an extremist ideology, seeded in the settlement of Yitzhar, which is spurring religious violence against Palestinians in the northern West Bank. (Jan. 2, 2020)

“Whether it is the socially ostracized hilltop youth or the more well-connected settler elite, the underlying ideology of biblically-mandated land conquest, ethnic purity, and theocratic law has persisted throughout the generations, and throughout the state’s institutions.” 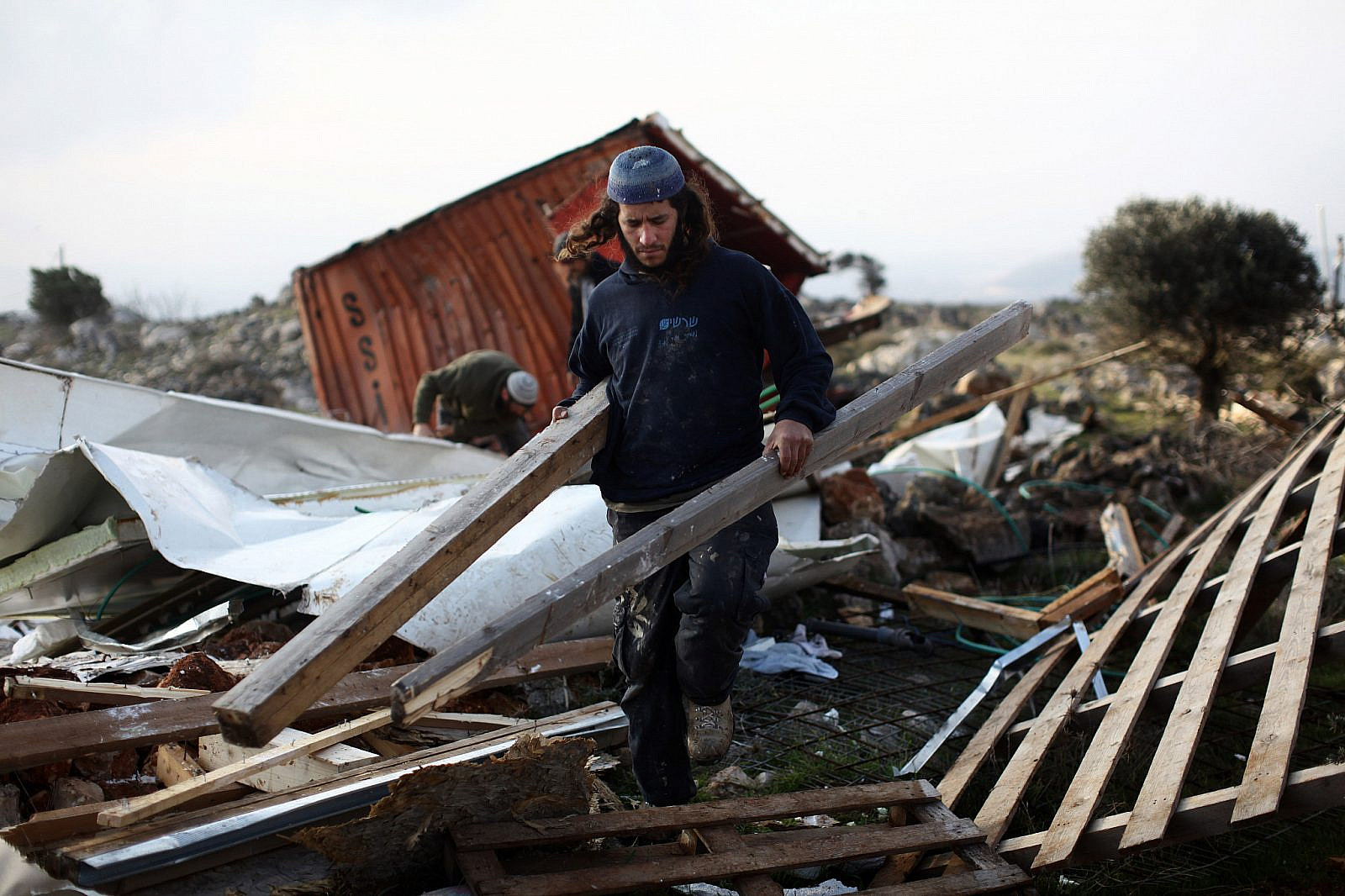 A new activism, a new politics, a new generation of Palestinians in Israel

Henriette Chacar speaks to four activists about the young, rising generation of Palestinian citizens of Israel who are navigating between the fight for Palestinian national liberation and for their civil rights in a ‘Jewish state.’ (Mar. 11, 2015)

“The third generation, especially since the Intifada of 2000, is the generation that is rebelling. They are characterized by strength.”

Michael Schaeffer Omer-Man speaks with Maisan Hamdan, a Palestinian Druze activist, on her rare travel to Beirut and the importance of defying the region’s borders and her Israeli citizenship. (Feb. 20, 2016)

“We are very deprived of a lot of the Arab region… Who gave anyone permission to separate us from our natural environment in the Middle East?”

Dahlia Scheindlin speaks with the author of “All the Rivers” Dorit Rabinyan, whose novel about an inter-ethnic romance between an Arab and a Jew was banned from the high school curriculum by Israel’s Education Ministry. (May 1, 2017)

“The demon that Liat and Hilmi [the novel’s main characters] are dealing with is generalization. Nationalization of the private, the intimate. Being citizens of the conflict, we are all wrapped inside this suffocating sack, and it blinds us.” 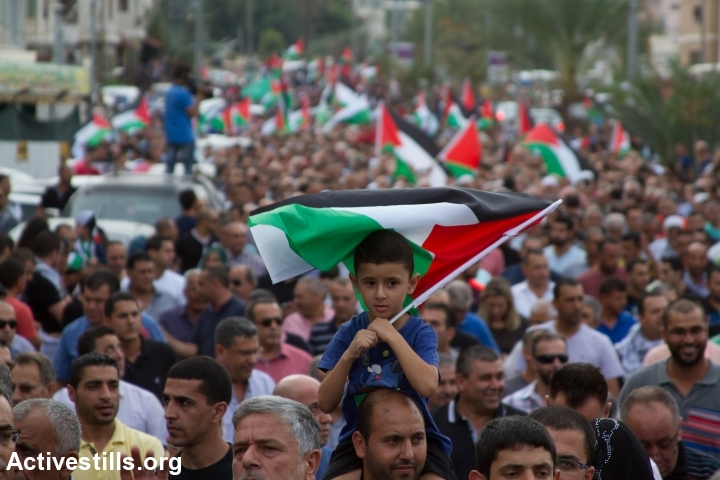 The settlers’ goal is not in the settlements

Noam Sheizaf explains that the religious Zionist movement’s push to settle the occupied territories is actually a means to an end: to control and reshape Israel’s state’s institutions in its image. (Jun. 8, 2017)

“There has never been a debate in Israel over establishing settlements… Rather, the debate has been over where to build — or, to be more exact, who will decide where settlements should be built.”

How the U.S. made Palestine the exception to the rules of peacemaking

“Between universalism for Palestinians and preferentialism for Israelis, Washington always picked the latter, and in doing so, abandoned the most basic rules of conflict mediation.” 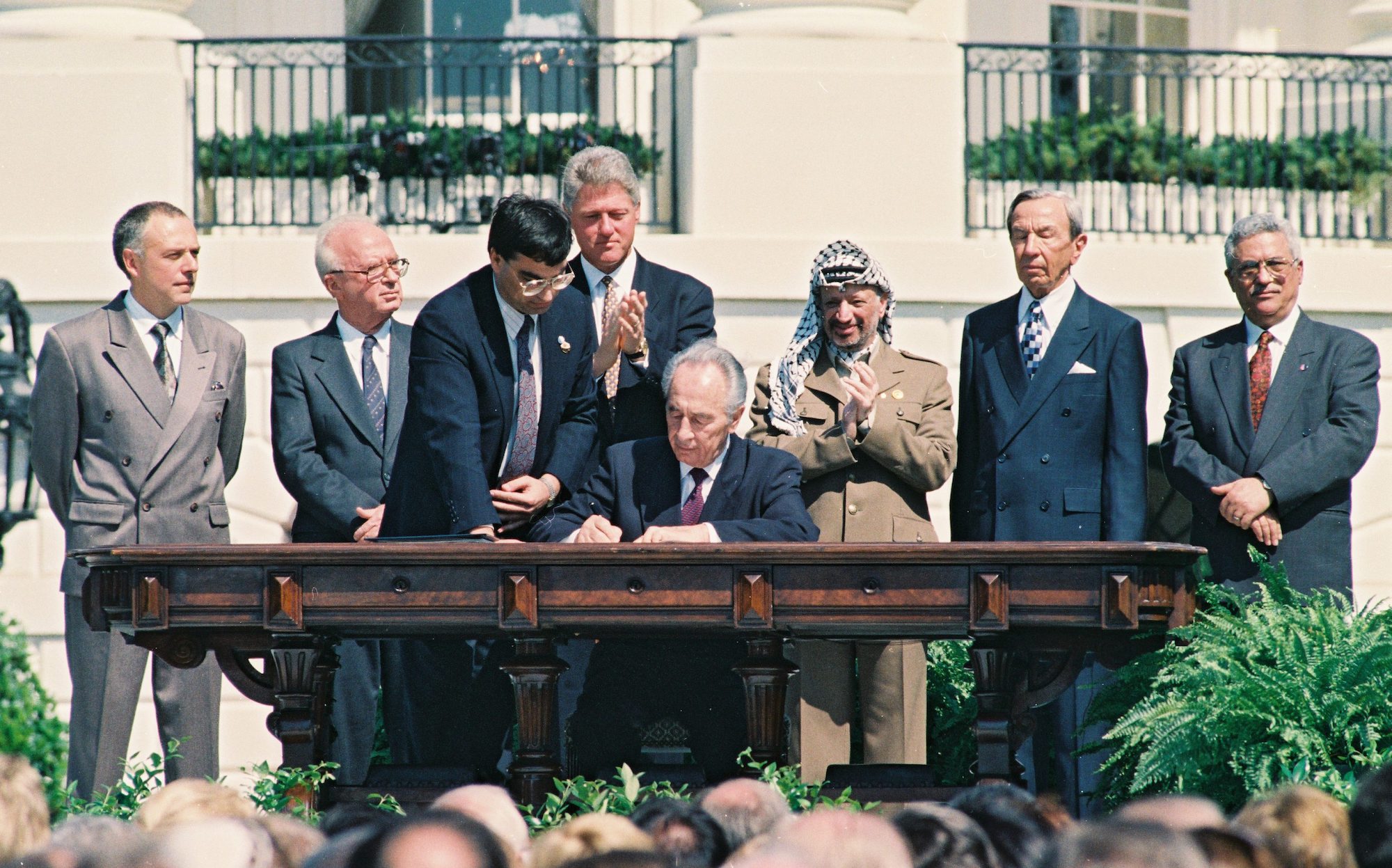 From heat waves to ‘eco-apartheid’: Climate change in Israel-Palestine

Matan Kaminer, Basma Fahoum, and Edo Konrad explore how the power dynamics in Israel and the occupied territories are shaping and hindering their adaptiveness to rising temperatures, growing desertification, and shrinking natural resources. (Aug. 8, 2019)

“Climate activists are no longer considered ‘cute,’ like they used to be… We are waking up to the fact that this is serious, and what we’re seeing happen around the world is helping.”