The World Health Organization declared the new coronavirus a pandemic last Thursday. But in addition to combating the spread of the disease, health practitioners and governments are also battling an alarming spread of misinformation. “We’re fighting an infodemic,” declared WHO Director General Dr. Adhanom Ghebreyesus.

This was the case in the occupied Palestinian territories over the last week, after the virus infected more than 39 people, primarily in the city of Bethlehem. One message circulating on WhatsApp in Arabic promoted a conspiracy theory that COVID-19 is a form of biological warfare released by China. Another text message warns people to stay home after midnight because helicopters will be spraying disinfectants across different cities. A pharmacy near Jenin ran an online ad for a miracle drug, claiming it can cure coronavirus and malaria.

Recognizing the importance of busting myths about the virus, the WHO has partnered with social media companies such as Facebook, Twitter, and TikTok to screen and remove false information.

Dr. Gerald Rockenschaub, who heads the WHO’s office in the Palestinian territories, said the organization is also working on a local level with the Bank of Palestine, using computer screens at their banking facilities to publish correct information, and with Paltel, the Palestinian telecommunications company, to send out text messages with important updates. Social media influencers have also been recruited to disseminate facts about the virus. For trustworthy information, said Rockenschaub, people should rely on messages put out by the government and UN agencies.

Misinformation is dangerous and can produce a false sense of security, said Marwa Fatafta, a Palestinian digital rights advocate and a policy analyst at the Palestinian think tank Al-Shabaka. Some reactions to the virus online have taken a patriotic tone, she said, reassuring people that, given the trials and tribulations Palestinians have historically endured, the coronavirus “will not defeat us.” Others, she continued, are referring to the pandemic as a test of God, telling people the virus can be staved off with prayers.

The coronavirus “has become another political issue to have an opinion on,” said Fatafta. “So, you can be sarcastic, you can disbelieve it.”

The risks of misinformation are especially high for Palestinians, added Fatafta. “In the history of colonization and occupation, we have learned not to trust political powers.” As a result, their relationship to authority is not based on a healthy social contract. “We have our intuitive distrust to authorities because we don’t believe they will act in our interest,” she explained. Recent polls show that over 40 percent of Palestinians surveyed in the West Bank, East Jerusalem, and the Gaza Strip lack trust in their current leadership, while 61 percent believe President Mahmoud Abbas should resign.

“When you don’t trust the government, then you look for alternative sources of information,” said Fatafta. “This is a hotbed for spreading fake news.” A Palestinian merchant tries to spread awareness about COVID-19 by placing face masks on mannequins outside a clothing shop, in Rafah, in the southern Gaza Strip, on March 8, 2020. (Abed Rahim Khatib/Flash90)

For years, social media companies denied responsibility for stopping the spread of misinformation on their platforms. But following foreign interference in the 2016 U.S. elections, the harms of fake news became even clearer, and the companies have been forced to integrate fact-checking processes into their systems, Fatafta explained.

To curb the spread of fake news about the virus, the Palestinian Authority has arrested several people suspected of deliberately disseminating false content. The authorities, said Rockenschaub, will have to navigate the line between freedom of speech and false information “that might be dangerous for the community, and create panic.”

But to Fatafta, arresting people is counterproductive. Not only is it an impractical approach, but authorities could abuse the state of emergency around the pandemic to suppress free speech and crush dissent more broadly. These draconian measures already exist in countries like China and Iran.

That fear became more real on Saturday night, when Israeli Prime Minister Benjamin Netanyahu announced that the Internal Security Agency, known as Shin Bet, will use counterterrorism technology to counter the spread of the coronavirus in Israel, including by tracking the movement of patients who have tested positive through their mobile phones. Israeli Prime Minister Benjamin Netanyahu at a press conference about COVID-19, at the Prime Minister’s Office in Jerusalem on March 11, 2020. (Flash90)

While Israel already employs these practices to monitor Palestinians, Fatafta worries that the PA could similarly use the coronavirus to legitimize even tighter surveillance. “There are no checks and balances in Palestine,” said Fatafta. “If you are going down that road, you might have to monitor what people are saying online, and surveil people online.”

The tools for such practices are already in place. In 2017, President Abbas passed the Cybercrime Law, which drew great pushback from Palestinian civil society. In effect, the law legalizes the PA’s crackdown on criticism and dissent, allowing it to censor speech in the name of national security and public order.

Instead, recommended Fatafta, the PA should invest in a long-term, sustainable strategy of increasing people’s social media literacy. “Tackling fake news is not just about arresting people, but about building a healthy, democratic relationship between leadership and citizens,” she said.

Two Palestinian online initiatives, Sada Social and Tayakan, have assumed this educational role by debunking rumors and releasing daily updates in Arabic. The two projects joined forces in the first week of the outbreak in Palestine, said Iyad Alrefaie, the general manager at Sada Social, with Tayakan focusing on research and fact-checking, and Sada Social making sure that false information is removed.

It is difficult to gauge the overall number of fake news posts, said Alrefaie, but the difference is noticeable. Whereas they were dealing with dozens of false claims in the first few days, now they have one new post to verify every couple of days. 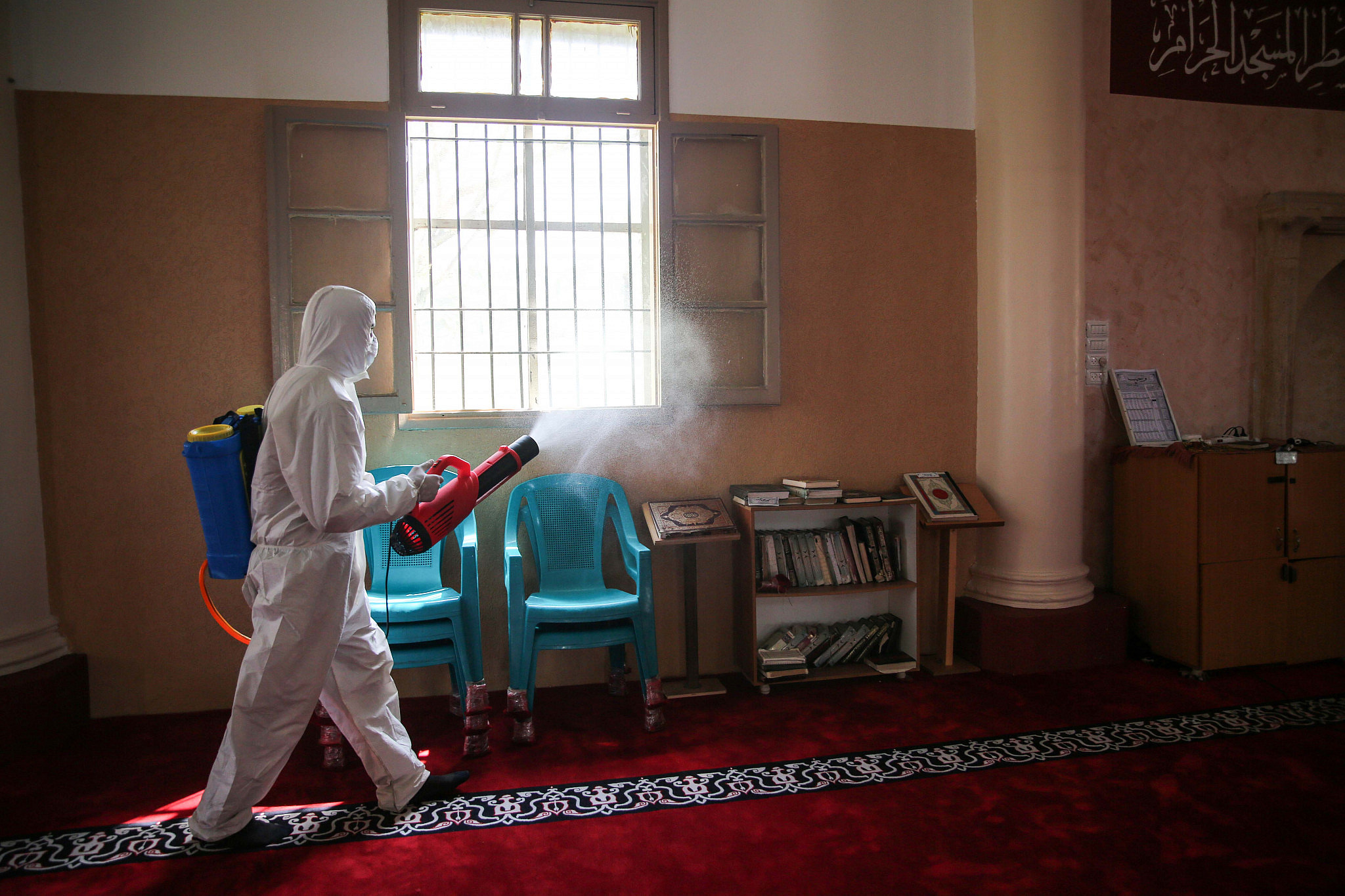 According to Alrefaie, two kinds of posts have been especially popular among Palestinians: messages that broadcast names of people who have supposedly contracted the virus, and fake warnings about measures that Israel or the PA are taking to curb the spread of the virus.

Messages being shared on private messaging apps are especially challenging to track, he added, because they seem invisible, and move rapidly. The two groups recently released a video focusing on dispelling incorrect information in private networks.

The relatively good news, said Rockenschaub, is that based on global figures, 80 percent of the coronavirus cases are likely to be mild. It is the 20 percent of severe or critical cases in which the health infrastructure in the occupied territories might face limitations, he said. “We need to try to address the existing gaps in the health system,” he added, by scaling up the Palestinian health system’s capacity, and the WHO is already teaming up with other providers to accomplish that goal.

This includes close coordination with Israel, said Rockenschaub, which has agreed to bring equipment into the Palestinian territories. Some patients, particularly in case of an outbreak in Gaza, might require care outside the strip. He said the WHO has raised this issue with Israeli authorities, who are “still considering how best to address that.”

It is easy during a crisis to point to the gaps in health services, “but no health system can function under the constraints that the Palestinians are under,” said Yara Asi, a lecturer at the University of Central Florida’s department of health management and informatics, whose work focuses on health, education, and development in war-affected populations. Even though public trust is low, Palestinians are following the government’s instructions, because they know that their health institutions do not have the capacity to handle a sustained outbreak, she added.

“This is not a normal health care system and it will not be able to respond normally. Nothing under occupation is normal. We will need to fix those cracks. How? Only by ending the occupation,” said Asi.