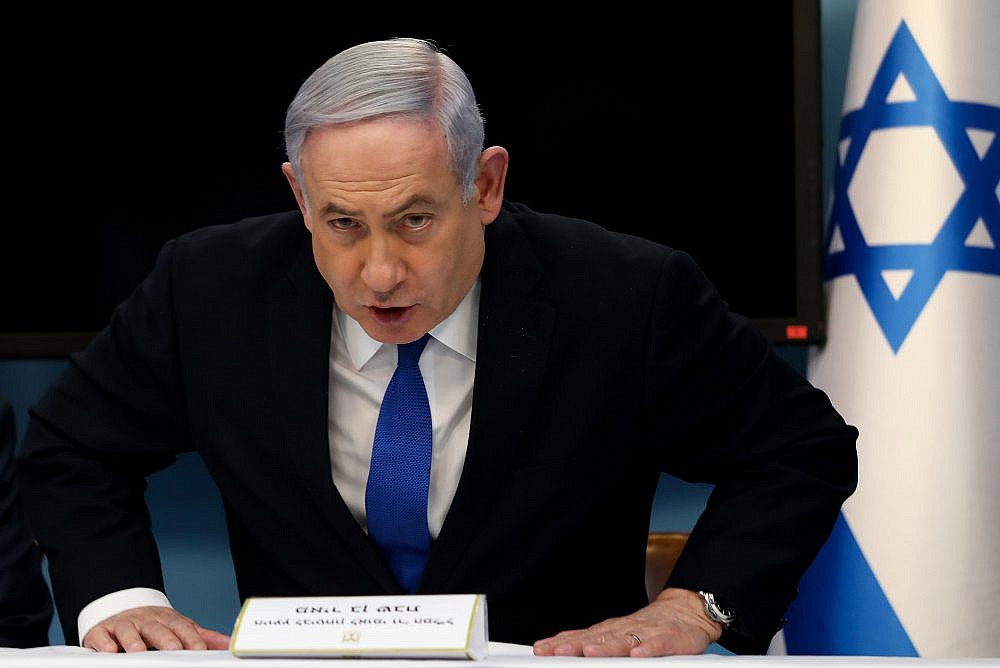 The Nazi jurist Carl Schmitt is known for establishing that the sovereign is he who decides on the state of exception. That is, a situation in which the executive power is no longer subject to the law. This is the basis for dictatorship, the clearest contradiction to the liberal worldview that enshrines both separation of powers and checks and balances.

The effects of such legal philosophy on the world — and not only in the extreme case of the Nazi regime — are clear to all. The consolidation of legislative and executive power in the hand of one branch of government without any effective oversight, especially when that government does not represent the entire public, is a recipe for mass violation of individual rights and abuse of power. A state of emergency in its most extreme form creates an executive branch with unbridled power. When it comes to human rights, there is nothing more dangerous.

That in mind, there is no combination more lethal than a nationalist government with fascist leanings led by Benjamin Netanyahu — a man facing trial for severe corruption charges and who is in the midst of a fight for his freedom — and a state of emergency. This state, even when facing a real emergency such as the coronavirus pandemic, is a bedrock for the manipulation and wholesale violation of civil rights by the government.

A state of emergency provides the government with an opportunity to corrupt power itself, promote foreign interests, and go after political rivals using tools and methods that the government wouldn’t be able to use on an ordinary day due to stiff resistance from the opposition. A state of emergency gives the government the opportunity to exploit the fear and uncertainty of the public, which is busy dealing with private or family issues and the (real or imagined) threats around the corner, to take steps unthinkable in times of normalcy. 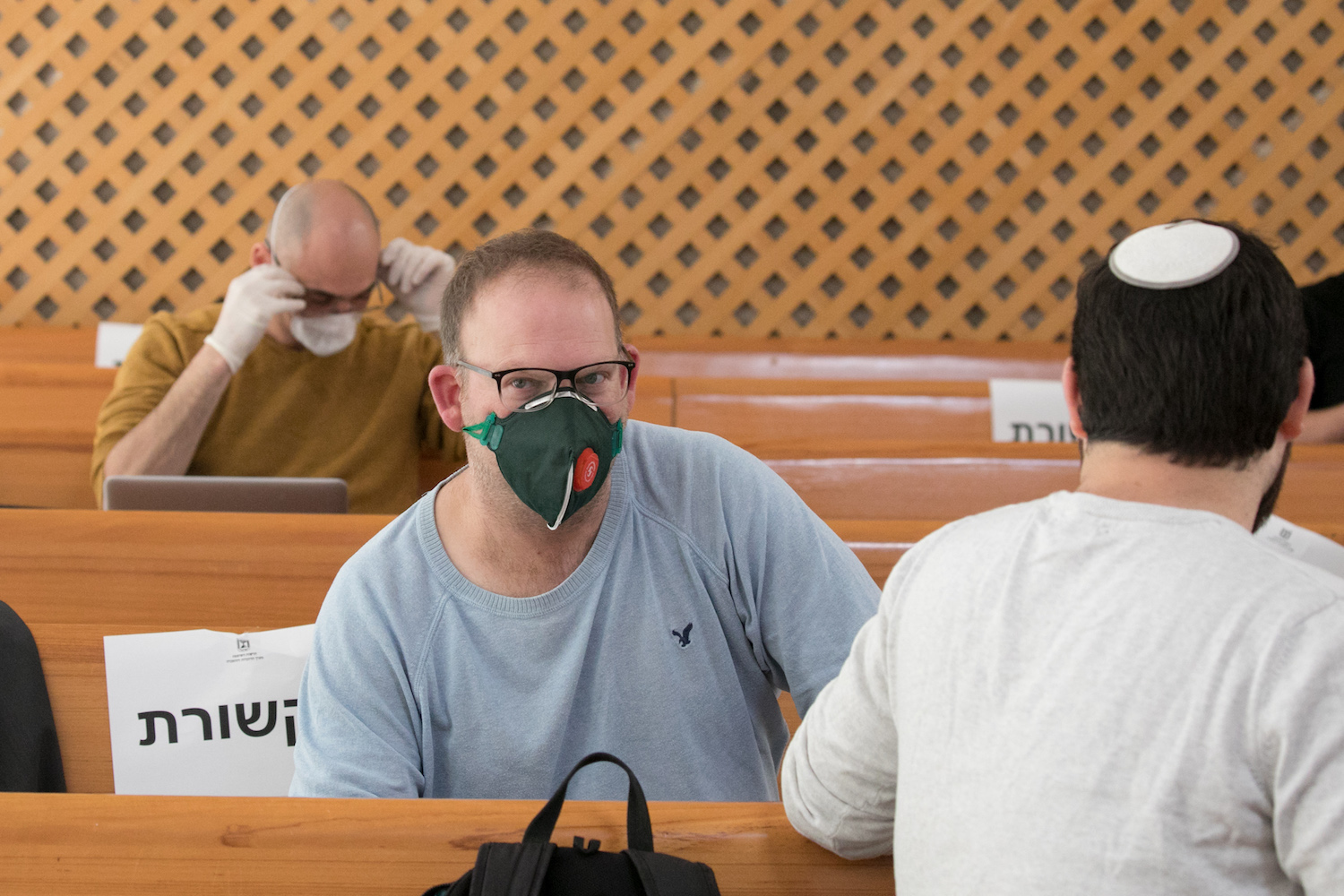 Israeli journalists wear face mask a during hearing at the High Court of Justice in Jerusalem about the decision of Israeli PM Benjamin Netanyahu to authorize the Shin Bet to monitor Israelis’ cellphone location data to help combat the coronavirus, March 19, 2019. (Olivier Fitoussi/Flash90)

Shutting down the courts and empowering the Shin Bet to monitor Israeli citizens’ digital data in the face of a coronavirus outbreak, are extremely dangerous acts. These steps have been taken by the executive power — rather than by the Knesset — using Israel’s emergency regulations, leading to a severe attack on Israeli citizens’ rights of access to the justice system and to privacy. Suspending the activity of the courts reduces and weakens one of Israel’s key mechanisms of oversight on the executive branch (fortunately the High Court of Justice has yet to be suspended), and the use of our digital information enables the Shin Bet to use tools to monitor civilians in a way that has never been possible in Israel.

These far-reaching steps set dangerous precedents, and were taken by the executive branch, which by definition does not represent the entire public, and currently does not even represent the majority of Israeli citizens.

But the danger of suspending court activity and allowing the Shin Bet to send information on Israelis to health officials pales in comparison to the most egregious act we have seen in recent days: the decision by Knesset Chairman Yuli Edelstein of the ruling Likud party to shut down Israel’s parliament.

There is only one way to put it: Edelstein is carrying out a dangerous government coup. The person charged with heading the legislature is the same person working to deplete its power, leaving the impression that he is a Trojan horse working for the government. Netanyahu does not have the authority to do what Edelstein has done on his behalf. Through his administrative powers, Edelstein is preventing members of Knesset from performing their duty and overseeing the work of the government, whether through the various committees or the plenum. He is doing this as a majority of Knesset members are demanding the right to oversee the work of the government. The emergency regulations signed by the government in recent days have dramatic implications, but Edelstein’s paralysis of the Knesset is the most drastic of all. 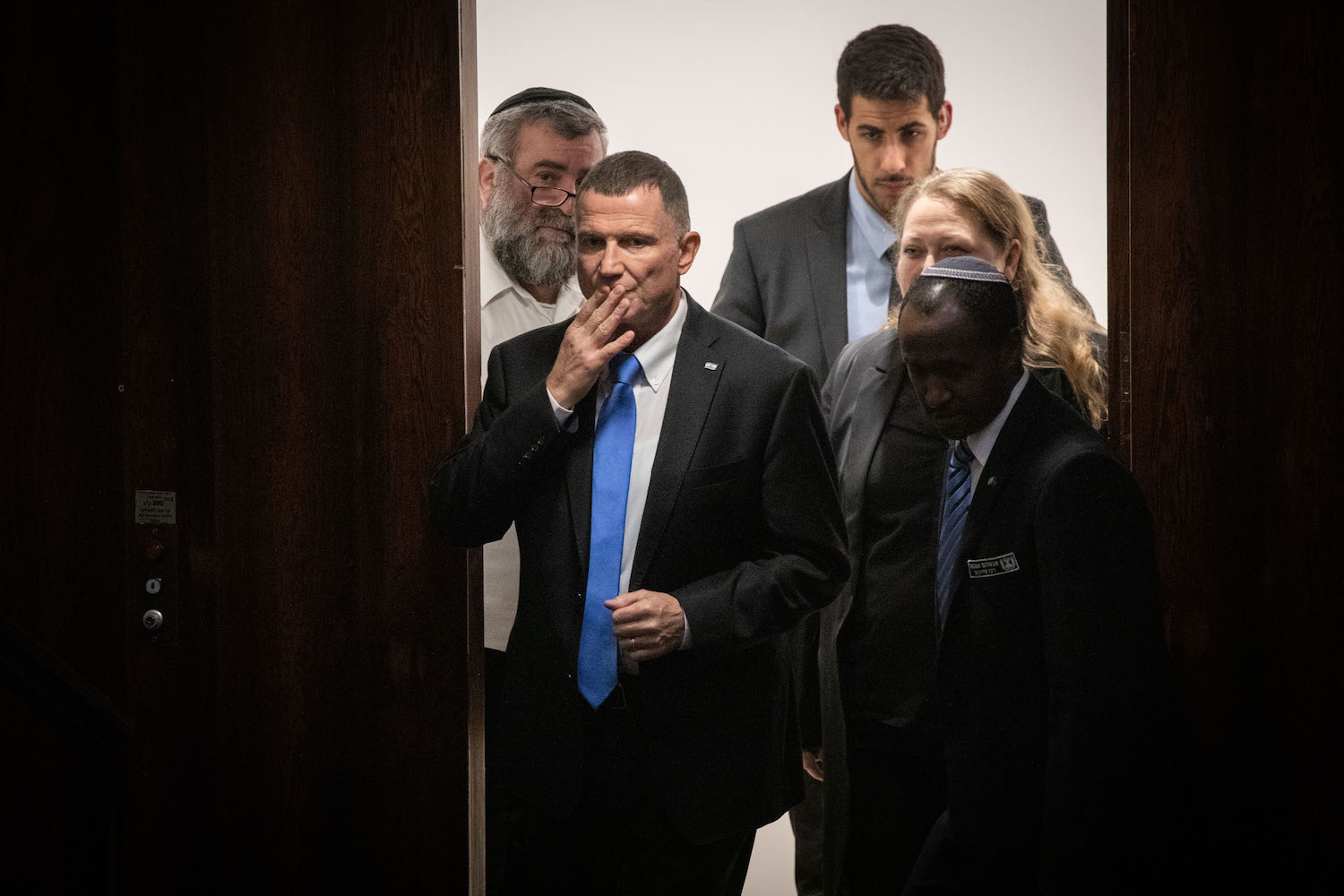 Speaker of the Knesset Yuli Edelstein seen during a vote on a bill to dissolve the parliament, December 11, 2019. (Hadas Parush/Flash90)

Israel’s constitutional regime provides little oversight over the executive branch, compared to the constitutional structures in other countries. This is a weakness of the Israeli system, in which the executive holds more power relative to the other branches. This weakness is inherent to our coalition system, which creates a near-automatic majority in parliament for the government on every issue, since all members of Knesset are elected in general elections through parties, making opposition inside the coalition a rare occurrence.

In Israel, Knesset members are not elected directly, and we do not have two houses of parliament, both of which weaken the power of the parties and strengthen that of the legislators. And yet the Knesset, along with the judiciary, remains the most effective means of overseeing the government, all the more so when it comes to Israel’s current transitional government — which does not enjoy the legislature’s confidence, since it holds the Joker card: legislative authority to which the government is also subject.

Therefore, a Knesset paralysis during a state of emergency is a particularly serious and dangerous step that inflates the government’s vast power and removes one of its only means of oversight. Netanyahu and his government could take advantage of the state of emergency in ways we cannot yet imagine. In fact, they have already begun to do so. After all, the entire world is facing the COVID-19 outbreak, so why is no other country’s secret service using “digital technology” the way the Shin Bet is doing?

A functioning Knesset could have investigated the Ministry of Health and the Shin Bet to determine the necessity of using digital information while reducing surveillance to a minimum. A functioning Knesset would include the representatives of various communities that the Shin Bet already collects intelligence on. Those representatives could make sure the security services do not take advantage of the epidemic to gather intelligence for non-coronavirus needs.

A functioning Knesset, for example, could have conditioned the reduction of the courts’ work on allowing Netanyahu’s arraignment to take place in order to prevent the public suspicion that this step was not taken in good faith and for genuine public interests. The Knesset could similarly ensure that the shuttering of the courts is truly necessary while examining the extent to which they should be suspended. If the Knesset was functioning, even the current attorney general, who holds a very broad approach to governmental powers, would not approve legislation by the executive branch without Knesset involvement.

The paralysis of the Knesset, therefore, creates a situation in which the government enacts laws that have tremendous implications for our lives and our rights without any parliamentary oversight. True, there is a legal system, and organizations like the Association for Civil Rights in Israel and Adalah are doing important work in challenging the constitutionality of the regulations. But after years of incitement against the High Court and the success in changing its composition in accordance with the right’s ruling ideology, the oversight mechanism of the judicial branch has also become quite limited. 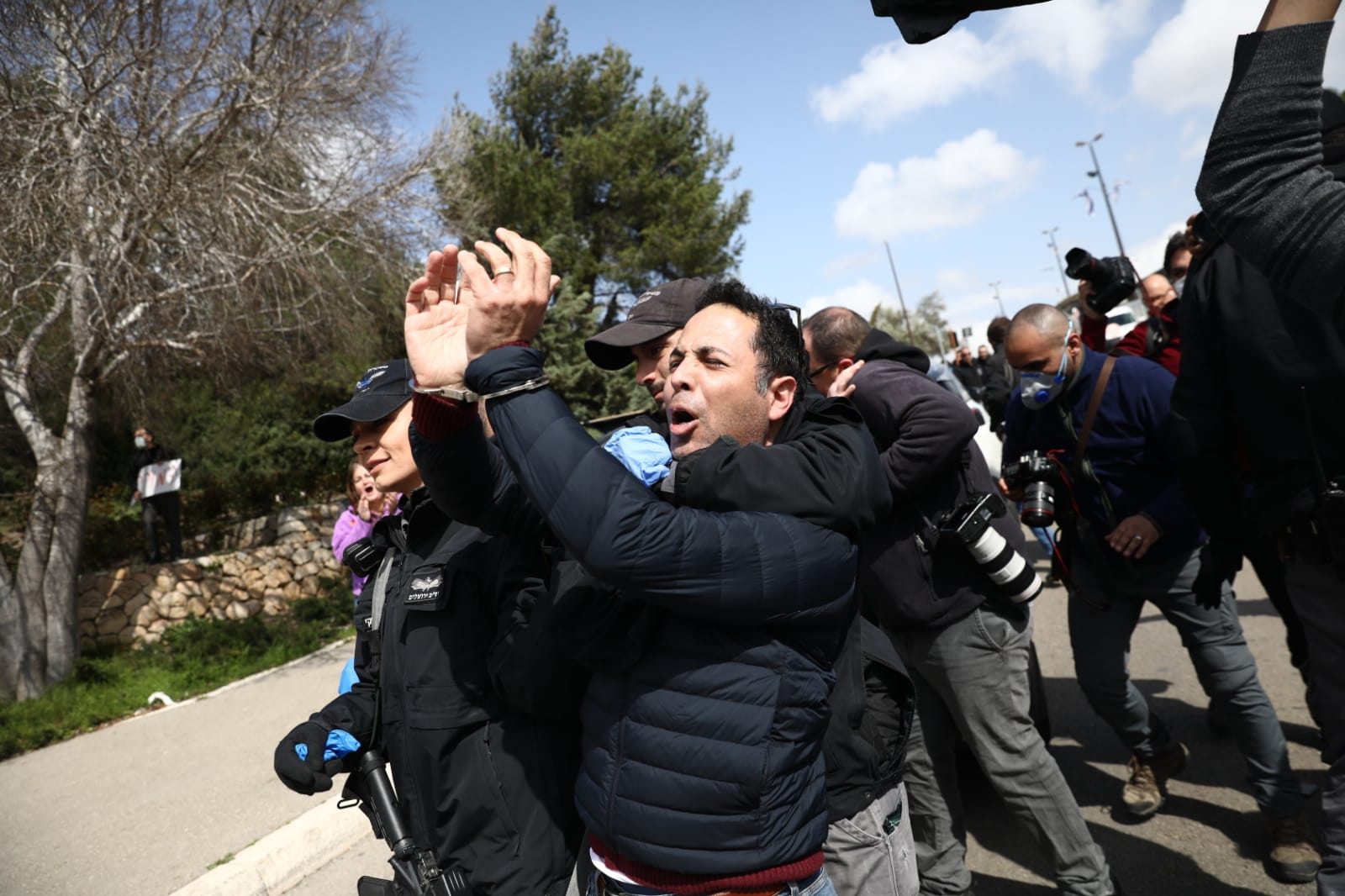 Israeli police arrest a protester near the Knesset in Jerusalem during a protest against the shutdown of the Israeli parliament, March 19, 2020. (Oren Ziv)

We must not accept Edelstein’s decision and we must openly call it what it is: a government coup against the Knesset executed by its chairman.

And lastly, a comment on a concept that was not yet mentioned: democracy. Critics of Edelstein’s shutdown are talking about the damage done to “Israeli democracy.” But Israel was not a democracy even before the coronavirus crisis. For over five decades, Israel has controlled millions of Palestinians who are not represented in the government, the Knesset, or the courts that determine their fate. Digital surveillance and limitations on traveling abroad comprise their everyday reality, even without a special state of emergency.

Suspending the Knesset does not make the situation of Palestinians in the occupied territories any worse, since the Knesset was already hardly ever interested in their condition. When it was interested, it was only for the purpose of plundering what was theirs and allocating it to the Israelis who settled on their land. Reopening the Knesset would hardly be enough to protect “Israeli democracy.”

But without reopening the Knesset, we will slide toward an autocracy run by Benjamin Netanyahu. Even in a non-democracy, that is something we must prevent from happening.

Michael Sfard is an attorney who specializes in human rights law and international humanitarian law, and the author of ‘The Wall and The Gate: Israel, Palestine and the Legal Battle for Human Rights.’