Abbas is rumored to be considering putting an end to Oslo in his UN speech later this month. If he does, will Israel reoccupy Palestinian cities? Will he also dissolve the Palestinian Authority? Or will nothing change — as usual. 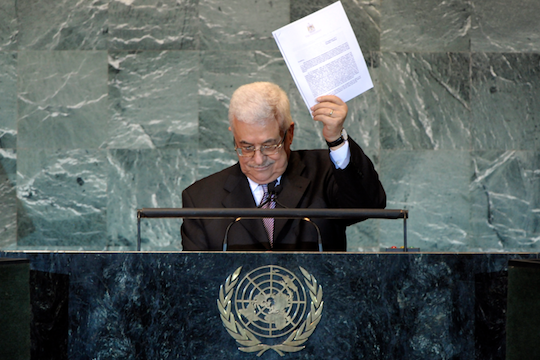 PA President Abbas holding up the application for UN membership in September 2011 (photo: UN/Marco Castro). The bid ultimately failed in the Security Council but Palestine was later recognized by the General Assembly as a Non-Member Observer State.

Mark September 27th in your calendars. It could be a big day in the West Bank. And in typical Mideast fashion, it could be a day of celebration and it just as easily could be the day the tanks roll back into the streets of Hebron, Jenin and Ramallah.

Where is this coming from? On the morning of September 26th, Palestinian President Mahmoud Abbas is scheduled to make a speech in which it is rumored he will declare all accords with Israel null and void, and declare Palestine to be an independent state.

At the heart of the matter are the Oslo Accords, which, ironically, Abbas played a key role in formulating.

Now bear with me as I take a brief look at the many failings of the Oslo Accords. Firstly, they are based on the premise, as stated in the Declaration of Principles, that the Palestinians recognize the State of Israel. In return, Israel does not recognize anything resembling a Palestinian state. It didn’t sound right at the time, and it still doesn’t.

The Oslo Accords were meant to be valid for an interim period of five years. In other words, they were only supposed to last until 1999. That was 16 years ago! The Israelis were supposed to disband the Civil Administration (its military government in the West Bank and Gaza) — that didn’t happen. Many of the democratically-elected members of the Palestinian Legislative Council, formed through the accords, are in Israeli detention facilities. The major Palestinian population centers, designated as Area A and which are supposed to be under full Palestinian control, are violated on a daily basis by Israeli army incursions.

The bottom line for Palestinians is that we felt the Oslo Accords might lead to an independent Palestinian state in the areas occupied by Israel in 1967, with occupied East Jerusalem as its capital — this is clearly not going to be the case. Israel refuses to negotiate on borders, on Jerusalem or on settlements, three issues that eliminate our chances for an independent state.

In the months after Oslo, our exhilaration turned into disappointment and then into anger. Two decades later, the only remnants of the Oslo Accords are continued oppression by the Israeli army, and further oppression by the Palestinian Authority under the guise of security cooperation.

As far as I see it, Abbas really has one of two choices: the first is to declare a Palestinian state under occupation and suffer the consequences, including Israeli army incursions (nothing new) and a halt to U.S. aid (the standard U.S. knee-jerk reaction). The second is to declare the dissolution of the Palestinian Authority and let Israel suffer the financial and security consequences.

Without access to borders, and without contiguity of territory, without an army to defend a state that would clearly come under immediate attack, my preference would be for Abbas to dissolve the Palestinian Authority. Either way, I foresee the Israeli army moving into the Palestinian civilian centers on a long-term basis, which, in turn, would result in the paralysis of the PA. Under both options, thousands of Authority employees would likely not get paid.

This would not be sustainable in the long-run, and the Palestinian economy will quickly face collapse, and herein lies the subtle difference between both options. The Palestinian Authority, or rather the government of the State of Palestine, will be pressured into relenting in order to stave off a humanitarian crisis in the West Bank. However, if the PA is no longer in the picture, international law compels the occupier, Israel, to deal with that crisis.

Reports are that Abbas has informed Arab donor states of the content of his speech, and has asked for an aid package in the vicinity of $100 million per month to keep the government afloat. Meanwhile the U.S. administration has been issuing threats.

Over a decade ago, Ariel Sharon declared the Oslo Accords null. It’s high time the Palestinian leadership does the same.