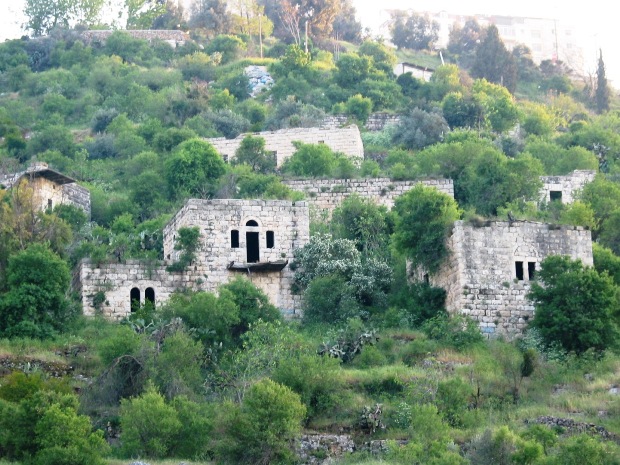 The ruins of Lifta, a Palestinian village near Jerusalem (photo: Ester Inbar)

Lifta, the best-kept Palestinian Nakba village was saved on Monday, after a surprising verdict by the Jerusalem District Court canceled a 2004 construction plan to build a luxury housing complex on the site.

UPDATE: I have received a message from Bimkom, a non-profit which took part in the effort to save Lifta, explaining that the court decision was to cancel the tender, not the plan.

As reported here in October, the Society for Preservation of Israel Heritage Sites decided to join the campaign to save the remaining houses of the Palestinian village Lifta, situated at the western entrance to modern Jerusalem. Lifta is the only Nakba village with dozens of original homes still standing, and not destroyed or repopulated.

Judge Yigal Marzel canceled the  construction of the project in Lifta on technical grounds, ruling that a complete survey by the archeological authority had to be completed prior to the execution of the zoning plan.

Israeli courts have very rarely ruled in favor of Palestinian refugees. In one of the only cases in which the court ruled to protect assets of refugees – the Ikrit and Biram ruling – the state never carried out the verdict.

The petition against the construction work in Lifta was filed by former residents of the village, Rabbis for Human Rights and Israeli and Palestinian activists. According to a Haaretz report, attorney Sami Ershied presented to the court both historical and political arguments for the preservation of Lifta:

“Given that Lifta is an abandoned village and its original owners live as refugees only a few hundred meters away, no construction should be done there, certainly not construction that will destroy the village and totally divest the original residents of their rights,” the appellants argued.

Read Also:
Last-ditch effort to save a unique Palestinian village
Why Jews need to talk about the Nakba
How Nakba villages sunk into Israeli landscape