After two decades of legal struggle, the Ruweidi family from Silwan has been granted recognition by the courts that they are indeed the rightful owners of their home. The decision rejects the Jewish National Fund’s claim that the home is the property of the State of Israel.

Moriel Rothman contributed to this report. 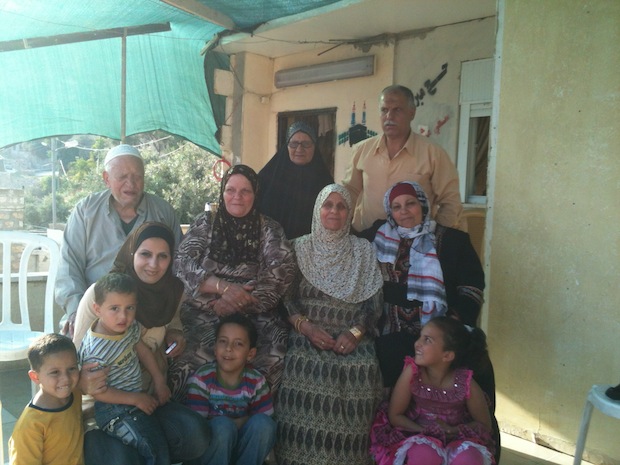 The Ruweidi family outside their home in Silwan May 9, 2012 (Photo: Moriel Rothman)

The Jerusalem District Court ruled in favor of the Ruweidi family from East Jerusalem last week (May 2), accepting the claim that their home is not “absentee property,” as the Jewish National Fund has sought to prove in court since the 1990s. The Ruweidi family will thus be able to continue living in their home.

The JNF, operating through its subsidiary organization Himnutah and together with the rightwing organization ELAD, claimed the Ruweidi’s home was legally seized by the state. During the proceedings it turned out that the confiscation was based on a declaration made in 1987 by a Palestinian man who has no connection to the family, and is suspected of falsifying similar claims in East Jerusalem on several occasions.

The court affirmed that the house, located in the Wadi Hilweh neighborhood of Silwan and referred to as “Plot 51,” is in fact owned by Juma’a Muhammad Saalim al-Ruweidi, now 85 years old, who was born raised in the house.

According to the 1950 Absentee Property Law, all property belonging to a Palestinian living outside of the newly declared State of Israel could be – and was – transferred to the possession of the “Custodian of Absentee Property” – meaning, the state. On several occasions, those properties were then handed over to organizations like ELAD and the JNF. In the past, this law has been used disingenuously as a means for appropriating land from Palestinians in order to expand Jewish settlement in East Jerusalem.

To learn more about the legal significance and usage of the Absentee Property Law, read Ir Amim’s comprehensive report on the matter.

After years of legal battles regarding the Ruweidi’s home, the District Court ruled in 2004 that the family had failed to prove ownership. The family then appealed to the Supreme Court, who in 2010 ruled that the District Court must reexamine the evidence. On Tuesday, the family was vindicated when the court finally ruled that the evidence for “absentee property” was indeed insufficient and asserted the Ruweidi’s family ownership of the house.

Sameer abu Alaa al Ruweidi thanked the Wadi Hilweh Alternative Information center for their support, as well as Peace Now and Rabbis for Human Rights, who have accompanied the family throughout their legal battle: “We call on the Israeli government to put an end to the cruel practices of settlers taking over Palestinian houses through forged documents and by force,” said al Ruweidi.