People get their news in different ways. I learned that Gaddafi had been killed (or injured, or captured…as was be reported at various moments through the day) not by watching TV but rather via an unusual observation. I was just checking-in to my hotel in Tunis when I ran into the CNN crew. They were checking OUT, and are now on their way to Tripoli. Indeed, my hotel – strategically located across from Tunisian Television headquarters and the Tunisian Foreign Ministry – was a natural gathering spot for the international press. But now, it is quickly draining of guests, leaving only a few journalists and most of the European Union election observers that are here to monitor Sunday’s historic vote.

This year, like no other, the international press corp that has been covering MENA (the Middle East/North Africa, as it is known in journo-tongue) has been stretched thin. And given recent budget cuts by broadcasters, they are being stretched thinner on even tighter funds. Years ago, Fox New’s Jennifer Griffin, then based in Jerusalem, said she had the best foreign posting ever. She noted that she can cover the war from 9 to 5, and be at home for dinner with her family at 6. But most of her colleagues who are still based in Jerusalem probably have not had a home-cooked meal all year, dashing from one hot spot in the region to another. 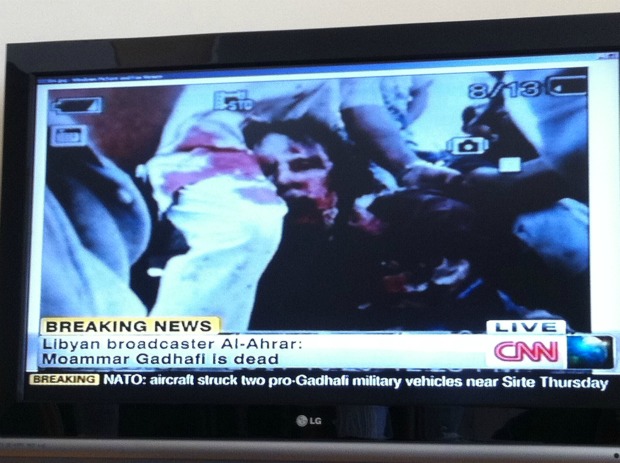 Part of that reflects a global audience’s appetite for news, and the attempt by international broadcast to compete with the speed, delivery and accessibility of amateur social media. And that leaves the broadcasters scrambling for something to say. CNN has a programme called “Backstory” which taks about the behind-the-scenes of making news, so here is some information of a similar tone. CNN International was on the air immediately, insisting that it cannot confirm anything. One heard expressions like “there are REPORTS this MAY be Colonel Gaddafi after he MAY have been POSSIBLY killed.” It reminds me of a courtroom prosecutor saying, “Your honor, I will retract my question referring to the defendant as a cold-blood murderer.” CNN then “crossed” to a live correspondent in Tripoli, who had interviewed the National Transitional Council (NTC) Information Minister on the balcony of a hotel, and the immediately qualified it by saying that it is unclear who is behind Gaddafi’s still-unconfirmed death (the NTC, or NATO). Then they tried to go to Barbara Starr, the Pentagon Correspondent, in Washington, but had technical problems over and over again. So the presenters found themselves stuck, talking about things to fill air time.

Others were not much impressive. BBC World decided to bring in two “experts” to sit on-set with them to chat about the latest news reports (again, not “news” but “news reports”). One of them is John Simpson, a man who in mid-September 2001 (note the date) stood before an audition full of journalism students in London and stated, in short, that Israel was to blame for the attacks of 9/11. The other man on-set is from Chatham House. His name is Yossi Mekelberg, and in case his heavy accent and ethnic name do not give him away, he is Israeli. His credentials as a “Middle East expert,” as he was introduced, probably have much less to do with North Africa than with the Israeli-Palestinian conflict. (His online biography supports that.)

None of this is new. For years, international news broadcast have had to fill air with chatter that risks being both misleading and inaccurate. And yours truly is among them. But before you judge them, or before you judge us, I challenge you to judge yourself, and judge your appetite. Imagine how frustrated you would be if you turned on the television and saw that CNN was not covering the event? The truth is: we want to know, and we want to know now. So the media may be a beast of burden, but we are the ones feeding the beast.