Under the banner of ‘Nakba in the Negev,’ demonstrations against a government plan to forcibly displace some 30,000 Bedouins from their homes in the Negev ended in 34 arrests, dozens of injuries caused by excessive police force, and very little media coverage or public interest.

In the West Bank, Israeli authorities do not respect the right to protest and any form of unarmed civil disobedience is considered criminal from the outset. In Israel, however, there are laws that are supposed to protect civil rights, including the right to protest. Earlier this week, thousands took to the streets to oppose the Prawer Plan, in an act of coordinated civil disobedience reminiscent of the “Days of Rage” of the First Intifada and Land Day protests. Reports of police using excessive force and violence came out of nearly all of the handful of demonstrations, leading to 34 arrests and dozens of injuries.

From Sakhnin and Haifa in the north, Jaffa and Jerusalem in the center and Be’er Sheva in the south, the protesters’ message was that the Prawer Plan constitutes a “Nakba in the Negev” – comparing the planned forcible relocation of some 30,000 Bedouin citizens to the displacement of 700,000 Palestinians upon Israel’s establishment in 1948. The Prawer-Begin Law passed its first reading in the Knesset last month and is being prepared for its second and third readings.

When Israel’s Channel 10 reported on the protests on Monday evening, it described the demonstrations as “violent confrontations” and even said demonstrators threw stones, an allegation based on police statements. (In researching this article I did not hear any reports of stone throwing.) The mainstream media coverage did not explain the Prawer Plan’s details, specifically, that no effort was made to include Bedouin community representatives in a decision that decides their fate – barring them from even presenting alternative plans. (For more information on legal implications of Prawer Plan.) 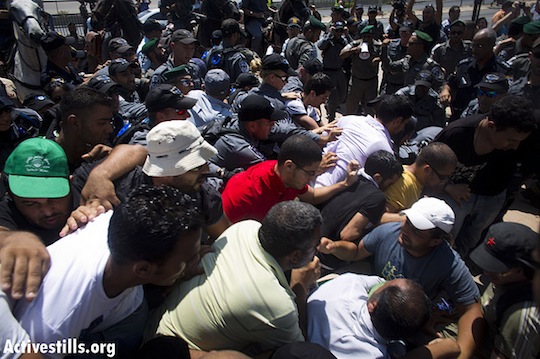 As pointed out in an article in Haaretz Friday [Hebrew], the Israeli media’s coverage of the day of protests – and the issues facing Bedouin citizens in Israel in general – is immensely underreported. As the writers argue, if Daphni Leef (a leading figure in the J14 social protest movement) had been arrested at one of the protests, Israeli media would have likely given it much more attention.

Reports of excessive police violence came particularly from the demonstration near Sakhnin, where a total of 14 people were arrested: one minor, three women and 10 men. Nine of the arrestees were still being held on charges of participating in an illegal protest, attacking police officers and resisting arrest, at the time of this report. According to Jalal Dakawar, an attorney with Adalah (The Legal Center for Arab Minority Rights in Israel) who is representing those arrested in Sakhnin, two of the men arrested were taken into a room and beaten badly while in custody at the Misgav Police Station.

Attorney Dakawar told +972 that when the protest started in Sakhnin at around 5 p.m. Monday, the police and riot police actually facilitated the demonstration, allowing it to go on for almost an hour before suddenly announcing it was illegal and demanding everyone leave. But before even giving people the chance to disperse, police started firing stun grenades and tear gas into the crowd of about 500, police mounted on horses trampled protesters and subsequently began making arrests.

A Jewish Israeli demonstrator, Yoav Bar, who was at the protest in Sakhnin, told +972 that three stun grenades hit him directly, leaving him with injuries that required medical treatment. He added that he was standing on the sidewalk at the time and thought that police aimed directly for him.

According to Dakawar there were several plainclothes policemen (one can be seen on the left, in this photo of an arrest below) among the protesters. While he didn’t see it himself, Dakawar heard from several demonstrators who alleged the plainclothes policemen were the ones to throw stones (presumably in an effort to instigate and justify arrests, something that has been done in the past at West Bank protests, reported on last year on +972). 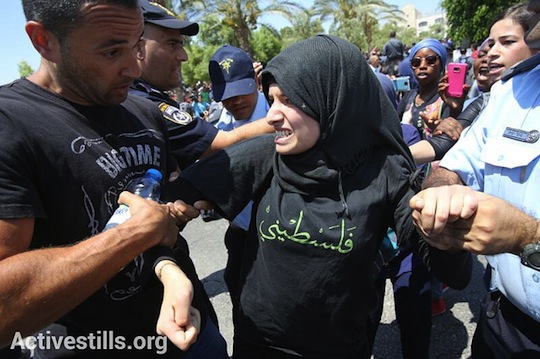 While it is important to note that most of the protests were not issued police permits, they were non-violent. The fact that demonstrators blocked roads, waved Palestinian flags and screamed chants with the word “Nakba” does not, in my humble opinion, justify the way police aggressively repressed and dispersed them. The fact that these were citizens of Israel protesting made no difference to the Israeli authorities. They make it clear that on both sides of the Green Line, Palestinians’ right to freedom of protest or expression is either highly limited or non-existent.

This is hardly the first time harsh police treatment of popular protests is seen when it comes to Palestinian citizens of Israel, nor is it the first time that the Hebrew media failed to cover or comment on such events. Looking only at the past decade or so, two extreme examples come to mind: the first is the indiscriminate police killing of 13 demonstrators (and injuring of many others) in the uprising of October 2000, in solidarity with the outbreak of the Second Intifada. Those killings were later the subject of an official panel of inquiry (the Or Commission). As Hagar Sheizaf and Miryam Wijler write in the abovementioned Haaretz op-ed, one of the effects of the October killings was public criticism of the Israeli press, which failed to bring the story of the uprising from the Palestinian side and served mostly as a platform for police spokespeople.

Likewise, authorities also brutally oppressed mass protests against Operation Cast Lead by Palestinians in Israel. While thousands were out on the streets weekly, with very little media attention, police and the Shin Bet arrested and interrogated hundreds of activists. Prosecutors made threatening statements about “national security” in order to convince the courts to keep demonstrators in weeks and even months of detention while awaiting trial. At the very same time, arrested Jewish demonstrators were released after a single night of detention, as is most commonly the case with arrests of demonstrators. Once again, the oppression of dissent, much like the protests themselves, was widely ignored by the media.

Video of arrest in Sakhnin (very difficult to watch)

Video of arrest in Be’er Sheva:

Haggai Matar contributed to this article.

Related:
Live blog: Protests across Israel/Palestine against Prawer Plan
‘When I look at the Prawer Plan, I see another Nakba’
Anti-Prawer protests sweep across Israel – A week in photos