Although the Israeli government is actively pursuing a detention regime meant to snare as many asylum seekers as possible, some recent legal victories provide a ray of light during an increasingly dark time for asylum seekers and refugees in Israel.

By Noa Yachot and Adi Lerner

The last year hasn’t been a good one for refugees and asylum seekers in Israel – or for those advocating on their behalf. Since an amendment to the Prevention of Infiltration Law was passed in January 2012, almost all change in the field of refugee rights has been for the worse, with the nascent asylum system in Israel making way for an unyielding detention regime. All asylum seekers arriving in Israel can now be detained for an unknown period, despite the fact that a vast majority of them cannot be deported. The law allows for a vague “humanitarian” exception – but despite the tireless work of refugee rights advocates, the state has adamantly refused to recognize the humanitarian grounds of even the most vulnerable of cases. When it comes to African refugees, the detention regime does not discriminate; as a result, small children are imprisoned, as are scores of survivors of unimaginably brutal torture at the hands of human smugglers in the Sinai Peninsula. 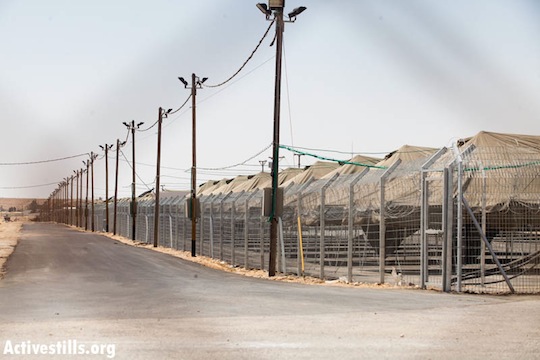 The Supreme Court will hear a challenge to the law next month. But in the meanwhile, advocates have scored some important victories in lower courts in recent weeks. And while up to 2,000 bona fide refugees remain imprisoned, leaving much work to be done, these victories are worth both reporting and celebrating.

One particularly exciting win came in the case of a mother and her two daughters, 8 and 11, from Eritrea. The three had been imprisoned in the Saharonim detention center for about 10 months. In their case, brought by Raya Meiler of the Hotline for Migrant Workers, the Be’er Sheva District Court held that the children, by virtue of being minors, have “special humanitarian grounds” justifying their release. Since the passage of the amended Prevention of Infiltration Law, the state had allowed only for the release of unaccompanied minors, while children who arrived with a parent remained in the vast desert prison.

Judge Yosef Alon rejected this position, and stated that the release of all minors on humanitarian grounds should be subject to judicial discretion. In this particular case, he determined that the girls’ young age – in addition to the length of their imprisonment and the fact that they cannot be deported to Eritrea – constitute humanitarian grounds. (It is hard for us to imagine a child remaining in indefinite detention without triggering a humanitarian ground, so we’re thrilled that the judge seemed to agree.)

In light of the new precedent, the Hotline requested the reexamination of other cases of parents detained with their children, and last week, nine more woman and 10 children, all Eritrean, were released. 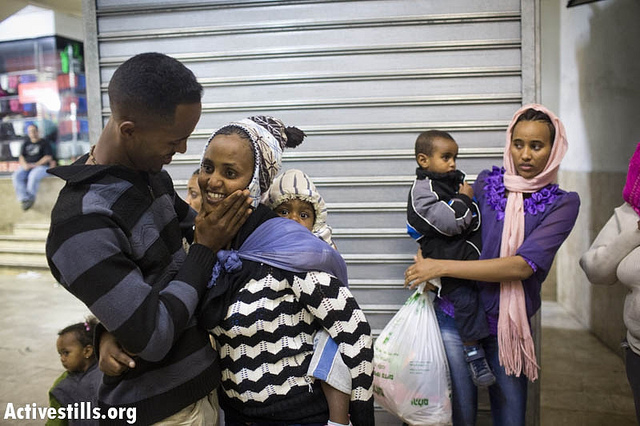 An Eritrean refugee hugs his wife and children, as they arrive to the central bus station in Tel Aviv on May 6, 2013, after they were released earlier today from the “Saharonim” Israeli prison. (photo: Activestills)

Torture as a humanitarian ground

The Supreme Court ruled in favor of another appeal submitted by Raya Meiler of the Hotline, regarding victims of torture. (We won’t go into detail here about the extensive network of torture camps to which refugees are subjected on route to Israel; for more on the issue check out this report.) Earlier this year, the Be’er Sheva District Court judge ruled that torture and abuse suffered by asylum seekers en route to Israel cannot constitute “special humanitarian grounds.” Thankfully, on April 18, the Supreme Court rejected this disgraceful position. 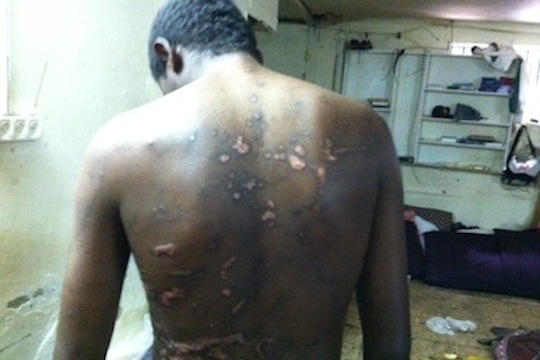 An asylum seeker shows the scars he acquired as a result of torture en route to Israel. (photo: Sigal Rozen)

The Supreme Court decision also grants discretion to the Detention Review Tribunal, a quasi-judicial body that carries out monthly reviews of the cases of all detained asylum seekers, to release rape and torture survivors, even if they are not considered victims of trafficking and slavery (a legal category that enjoys some protections in Israel).  Until that decision, the tribunal did not believe it had the authority to do so. The Hotline is now working to secure psychological evaluations for all the torture victims known to the organization.

Applying for asylum from jail

Israel is a signatory to the 1951 Convention Relating to the Status of Refugees, but the state makes it notoriously difficult for people to access the asylum procedure – that difficultly is particularly pronounced for imprisoned asylum seekers, even more so since the implementation of the amended anti-infiltration law. The Hotline works to locate asylum seekers and convey their requests to the state – but the organization is not allowed access to all the prisoners, and without intervention, they can easily languish for months without being given the opportunity to state their refugee claim before a government authority. But a recent decision by the Be’er Sheva District Court might make things a bit easier on that front as well.

According to the law, if the Interior Ministry does not process asylum requests within three months of their submission, the asylum seeker may be released from detention. Until now, however, the Interior Ministry did not begin counting when it received requests from the Hotline on behalf of those in prison. The recent ruling, in a case brought by Asaf Weitzen, determined that the Interior Ministry must indeed start counting as soon as it is notified that a given asylum seeker claims refugee status. This is especially significant considering the detainees do not have any access to actual asylum application forms (which is clearly a grave problem in its own right).

Unfortunately, despite this principled success, the Hotline has not managed to help fulfill the monetary conditions set for the release of this particular asylum seeker, and he remains in prison, despite having applied for refugee status six months ago.

As +972 has reported in the past, a government regulation instated last year empowers the state to strip the residence permits of asylum seekers who have been suspected of criminal involvement, and to indefinitely detain them under the Prevention of Infiltration Law – even if they were never actually convicted or even charged. While the Hotline requested the release of those asylum seekers on the grounds of the illegality of the regulation, tribunal judges have thus far rejected those requests, claiming they do not have the authority to rule on its legality. But a Be’er Sheva judge, in a case brought by the Hotline, ruled on May 5 that the tribunal can do just that, and also exercise discretion in considering a range of other circumstances justifying release. This means that all of those asylum seekers, many of whom had hired private attorneys in order to appeal to the district court, can now turn to the tribunal through the Hotline, in a simpler (and free) process.

Next step: Strike down the law 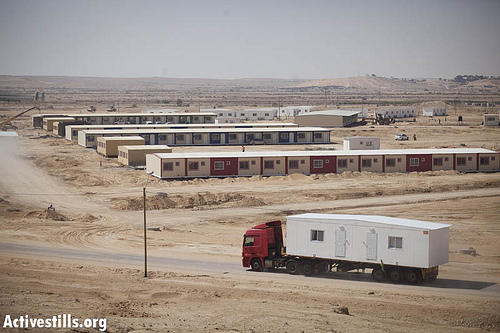 A mobile home unit is transported into the new prison facility under construction near the current Saharonim Prison in the Negev Desert, near Kadesh Barnea, October 10, 2012. Israel is building a new facility that could hold thousands of additional asylum seekers. (photo: Oren Ziv/ Activestills.org)

The State of Israel is actively pursuing a detention regime meant to snare as many asylum seekers as possible. Considering the nearly 2,000 who remain imprisoned, these victories might seem minor. But they provide some critical rays of light in what has been an increasingly dark reality for asylum seekers and refugees in Israel. And they could herald a much bigger victory: the Supreme Court, which is set to rule on a challenge to the amended law, has already indicated that the state has some explaining to do (the state, in response, continued to insist that the law is constitutional). The court should go much further, by striking the law and undoing the detention regime. Protecting refugees is not optional – not for Israel or any other country.

Adi Lerner is the Crisis Intervention Center Coordinator at the Hotline for Migrant Workers, whose activists visit detention centers regularly to provide paralegal aid to asylum seekers and other detainees. Noa Yachot is an editor at +972 Magazine.