From up close, a wall can seem smooth, unbreakable and infinite – it is the only thing in sight. The wall, a wall of despair or a wall of separation, is real. But by taking a few steps back, either physically or spiritually, cracks in the wall can come into sight. 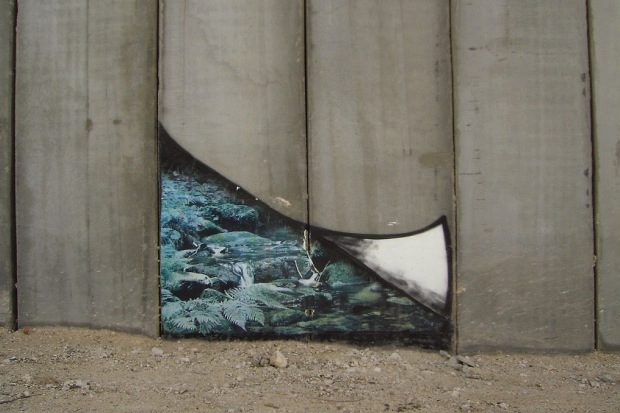 I’ve been in the U.S. for almost two weeks now, and I’ve begun to see cracks in the “Despair-Wall” that I wasn’t seeing – or wasn’t able to see – 14 days ago.

When I boarded the plane departing from Ben Gurion International Airport, it was with feelings of darkness, of exhaustion, a feeling that bordered on despair. Get me out of here, I thought. Get me out of here. Granted, I’ve also had a rough few months since being released from a short stint in IDF Military Jail this past November (just as Israel began its latest series of attacks on Gaza and Hamas launched its most recent round of rockets into Israel), but the situation itself has also seemed pretty grim.

Over the past few months, the West Bank has been in a state of turmoil. IDF troops shot and killed a young man named Mahmoud al-Titi during a protest in the al-Fawar refugee camp, bringing to eight the number of Palestinians killed by the Israeli military throughout the West Bank since the beginning of 2013. And as Gideon Levy devastatingly pointed out in an op-ed right before the recent Israeli elections, no one seems to care.

And while we’re on the subject of elections: the sweeping success of Yair Lapid’s tautologically named “Yesh Atid” (“There is a Future”) Party has proven to be entirely as negative as many on the Left initially worried. Lapid formed a firm alliance with Naftali Bennet and his far-right “Jewish Home” party (and affirming the alliance’s robustness by forbidding his colleagues to go on a tour with the left-lite NGO, the Geneva Initiative). Aside from that, Bibi’s government that is in the process of being formed right now will be thoroughly and completely right wing, nationalistic, xenophobic, and as Larry Derfner put it, conveniently equipped with a Tzipi Livni-shaped fig leaf Bibi can wave toward Obama to prove his “seriousness about peace.”

And while we’re on the subject of Obama: Obama coming to Israel and saying nothing would strengthen and boost the current of ever-growing terrible things.

And while we’re still on the subject of terrible things: What about the segregated buses? And the upcoming eviction in Sheikh Jarrah. And a right-wing NGO is suing the maker of Five Broken Cameras. And more random violence against Palestinians around Jerusalem. And Syria?

Like I said, things look grim and dark from my home in Jerusalem. And this darkness is real. Coming to the States did not allow me to see these horrible things in any positive light. They cannot.

But often, when one is standing next to a wall – a Wall of Despair or a Wall of Separation – all that one can see is the wall. From that angle, the wall can seem smooth, unbreakable, infinite. And the wall is real. But sometimes when one takes a few steps back, either physically or spiritually (or both), cracks in the wall come into sight.

And over these past few weeks, I’ve regained some of my ability to see the cracks.

Cracks like the fact pointed out a media analyst friend, that Mahmoud al-Titi was mentioned by name in many of the major Israeli news sources, which is not a given when Palestinians are killed in the West Bank.

Cracks like mainstream Israeli voices speaking out against violence towards Palestinians, often in ways that do not recognize the systematic nature of the violence, but nevertheless condemn them strongly.

Cracks like terrible settler violence against Palestinians in Qusra making it on to Channel 2 news, in a way that reflected a high degree of condemnation (while also lacking in systems-analysis).

Cracks like Shas and the ultra-Orthodox breaking away from the pro-settlement right — not from a place of sympathy for Palestinians, but from one of politics. According to one report, Shas leader Shlomo Benizri said he “is willing to sit in a coalition government with MK Hanin Zoabi “if that is the price for saving the Torah world.”

Cracks like the media-spurred delay of the eviction in Sheikh Jarrah.

Cracks like MK Merav Michaeli, from the less-and-less-left Labor Party, giving a speech in the Knesset calling on Israelis to stop self-perceiving as victims. Or like Yesh Atid’s MK Ruth Calderon, who before giving her own interesting but problematic speech in the Knesset, made headlines for questioning whether there might be a way to change Israel’s anthem to make it more inclusive for non-Jewish citizens.

Cracks like the brilliant Palestinian led and organized non-violent initiatives like Bab al-Shams, the staging of a wedding in protest of apartheid at the wall by the village of Hizmeh, general nonviolent action and energy and movement around the issue of hunger strikers.

Newness. Cracks. Little pieces of light. Not a flowing river of optimism, but little streams pushing through the mounds of dirt and dark.

I fly back tomorrow. As I board the plane to Ben Gurion, I will do so filled with renewed commitment to struggle against injustice, with love and with compassion, to remind my friends and community members that there is always something to do to change the face of the next hour. I hope they will remind me of the same when I am down again. And if I am stopped at the airport, I will be stopped with a smile: because there are cracks in the wall.