Israeli artists and authors abroad are beginning to create an alternative Hebrew culture that challenges norms and national borders. Israeli politicians, on the other hand, aren’t so pleased. 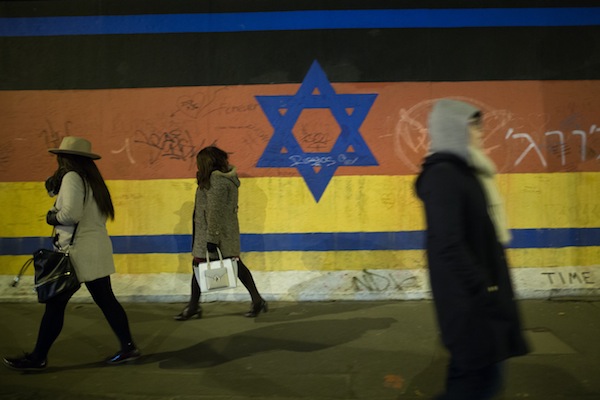 People walk by a mural depicting a combination of the Israeli and German flag on the Berlin wall, March 13, 2016. (Noam Revkin Fenton/Flash90)

Over the past few years we have been witnessing the growth of an alternative Hebrew culture, both independent and diverse, outside of Israel. Just recently two Hebrew-language publications have been published in Berlin: the bi-lingual magazine “Aviv,” edited by Hano Hanostein and Itamar Gov, and “Mikan V’Eilach,” dedicated to diasporic Hebrew and edited by Tal Hever-Chybowski. They join the relatively older magazine “Shpitz,” edited by Tal Alon, and a number of institutions such as Berlin’s Hebrew library and the Berlin Public Library.

Diasporic culture is slowly awakening in Israel as well. Examples include Itamar Orlev’s book “Bandit,” or Tomer Gardi’s new book, which was written in broken German and is currently making waves in Germany. The discourse is not defined by the physical location of the writers, but rather by their consciousness, which is the product of diaspora. In the global age it is difficult to feel obligated to national borders, the borders of language, or the borders dictated to the citizen by his nation.

I feel, however, that there is a need to make clear the cultural aspect of this diaspora, which includes a diverse cast of voices and takes place in so many places that it is actually bigger than Berlin (Berlin, of course, is a strategic place because of the history of the Holocaust). The paradox is that while Israel is closing its borders to the diaspora, it is also appropriating its works. For example, while the annual Sapir Prize for Literature was closed off to writers who live abroad, the State of Israel is monopolizing Jewish works of art and literature outside of Israel, as exemplified by the National Library of Israel’s attempt to take ownership of Franz Kafka’s manuscripts, for instance.

Over the past few years, more and more voices in Israel want to close the door to Hebrew, Jewish, and Israeli voices who live abroad, specifically because of the growing effect of the Hebrew diaspora. But this rejection only strengthens the diaspora. On the one hand, strengthening the mental border between border Israel and the diaspora leads to a deeper understanding that there is a need for creative independence and autonomy in the diaspora. On the other hand, there is a refusal to forgo a dialogue, whose goal is to go beyond these borders.

This reaction is reminiscent of the neoconservatism that we see in fundamentalist movements, which oppose globalization and freedom of information — and are explicitly against cosmopolitan identities. Is it even possible to create imaginary borders between Hebrew, Jewish, and Israeli works in the Internet age? It is wonderful to see that every conservative response is answered by an even more radical response by people who understand that their art is greater than the narrow imagination of politicians.

And the paradox lies before us: the more they try to strengthen the borders, the more culture will flourish and challenge these conservative positions by creating more cosmopolitan, independent diasporic structures. If we open these borders to other languages and places, we could become part of a never-ending stream of creativity. That way we can truly learn what is happening outside our national group.

Diasporic culture often criticizes Israel from both inside and outside. They put up an emotional wall to try and stop Israeli voices from developing this culture. This wall joins a long list of other walls that Israel builds. Israel tried to block out the diaspora, and the attempt to stop this new culture is yet another attempt to negate the Jewish diaspora. The emotional aspect, which seeks to ignore voices of lamentation, is reminiscent of the way Mizrahim and Palestinians are silenced. Instead of rejecting the laments, listen to them — they are not coincidental.

For many years Israelis left the country due to political, social, ethnic, and gender problems that were created by the state — and which the state never took responsibility for. The Mizrahim who immigrated to the U.S., Palestinian refugees who were thrown out of their country, Palestinian citizens who often feel like it’s better to be foreigners in foreign countries than foreigners in their homeland. The attempt to block out any criticism of Israel is a form of joining the masculine, militant stream of Israeli hasbara. Anti-Semitism and fascism created Israel, yet without criticism we return to these very constructs. We must listen to diasporic voices without building emotional and political barriers, ones that hide behind the idea of “patriotism,” which in itself is a continuation of oppression by other means.

Mati Shemoelof is an Israeli author, poet, editor, journalist and activist based in Berlin.