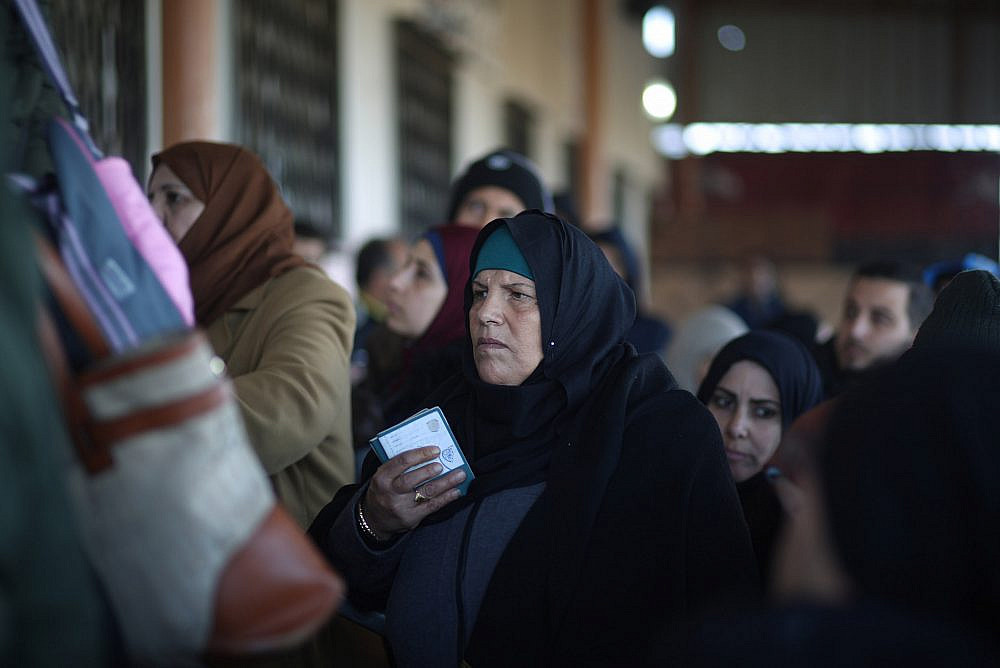 It is all but impossible, if you are a tourist, to enter Gaza. Entry via Egypt is prohibited to everyone except Gaza residents, international aid workers, journalists, and diplomats. If you do not have a Gaza hawiyya (ID), do not expect to be allowed in through there.

The fact that I was one of the few in the world that can actually visit and see Gaza, then, makes my recent July vacation there with my family all the more special. Its beautiful beach, amazing food, and wonderful people made my trip there one of the most incredible experiences of my life.

Yet I, like any Palestinian who wants to travel to Gaza with a hawiyya, had to forgo any expectation of having my basic human rights respected. Instead, I experienced consistent humiliation, utter exhaustion, and total confusion. What should have taken hours took days, slowed down by uninterested and scornful Egyptian border agents, purposefully mismanaged crowds, and a sweeping attitude of dehumanization toward the Palestinians trying to reach their homeland.

For Palestinians trying to return to their besieged home, the Sinai is the only available route they can take. Because Egypt publicly demonstrates “high-level ties” with Israel as they keep tabs on all Palestinians entering Gaza, travelers have to endure constant and consistent abuse from Egyptian authorities along the way.

To travel to Gaza via Egypt, you first have to reach Cairo and hire a driver who will take you to the Rafah Border Crossing. Although this leg of the journey seems simple enough, a drive that is supposed to take only five hours across the Sinai took, instead, two whole days. 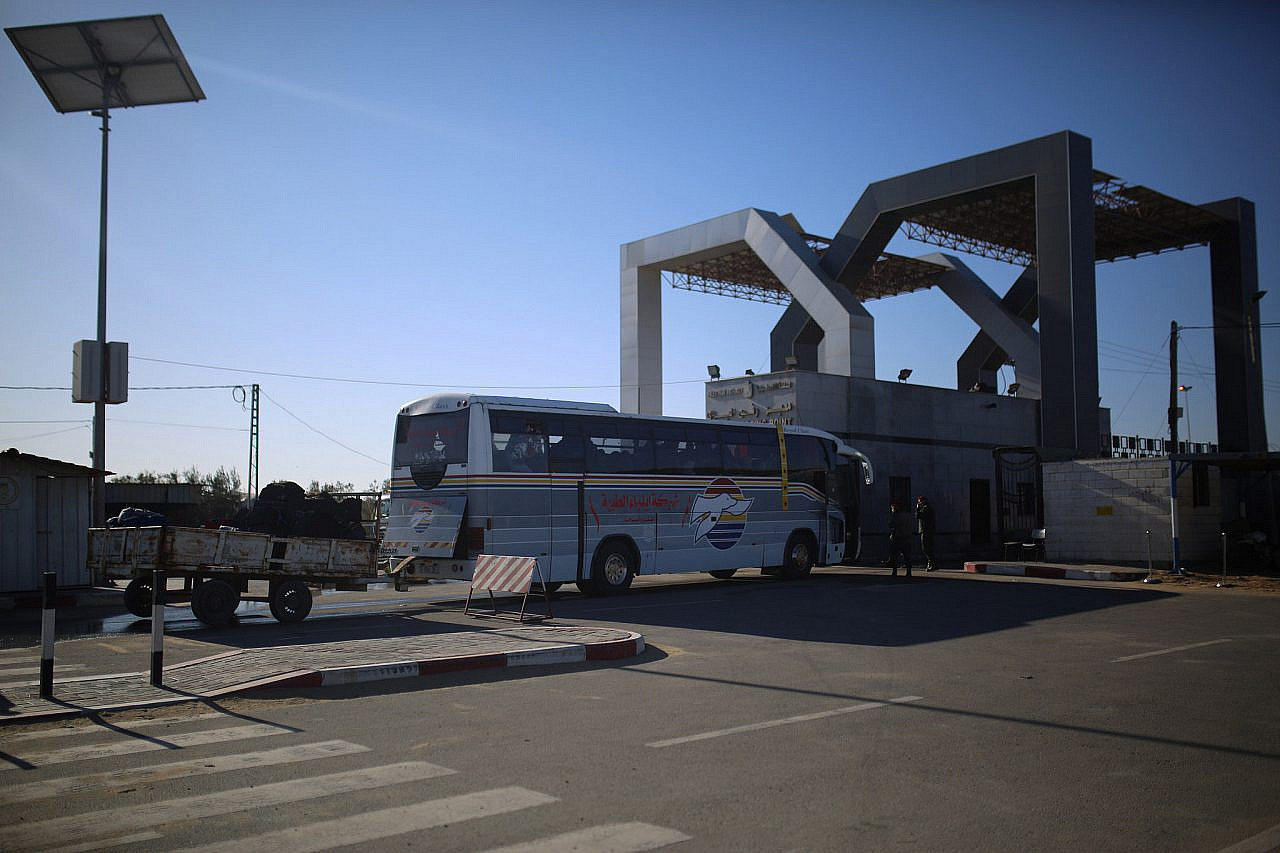 A view from the Palestinian side of the Rafah Crossing, Gaza Strip, January 29, 2019. (Activestills/Mohammed Zaanoun)

This is because Egypt treats Sinai as a war zone. The government’s “war on terror” has turned a once-beautiful area of Egypt into a hyper-militarized zone with checkpoints every few kilometers. Instead of thriving cities close to the Mediterranean, the Sinai Peninsula is filled with military tanks, evacuated homes riddled with bullet holes, and soldiers stationed at every turn.

Approaching the El Ferdan ferry, which crosses the Suez Canal, we arrive to see hundreds of Palestinians who have spent the night waiting in their cars. At this checkpoint before the ferry, the Egyptian military goes through every single piece of luggage — at their own pace, of course.

When we arrived, there were over 170 cars present. Although hundreds of Palestinians take this route every day, there is nothing nearby except the dirt road. In the sweltering heat, Palestinians need to figure out their own shelter, as the Egyptian military does not provide a rest area, food, water, or even toilets to the hundreds waiting. The only comfort we found was a small store selling water and tea, run by an elderly Egyptian woman who lives in the nearby village.

We waited more than 10 hours to be inspected by an Egyptian soldier. The inspection seems random. Some Palestinians waiting said they confiscate electronics; others said they confiscate wrapped gifts; still others believed that the inspection is arbitrary and the soldiers don’t really do anything. It all seemed to depend on the specific soldier who inspected your luggage. Ours, thankfully, was in a good mood. We crossed the Suez relieved, with one of the largest checkpoints finally behind us.

The relief, however, lasted about 500 meters, after which we were confronted with yet another meaningless attempt to humiliate Palestinians: a further checkpoint mere minutes away from the last one. My mother in law, who suffers from severe asthma, had almost collapsed from the previous wait. Knowing this, our driver decided to cut the line to ask if we could go through, since we also had my five-month-old son. Unwilling to hear his plea, the soldier raised his gun and threatened to take his driver’s license if he said another word. 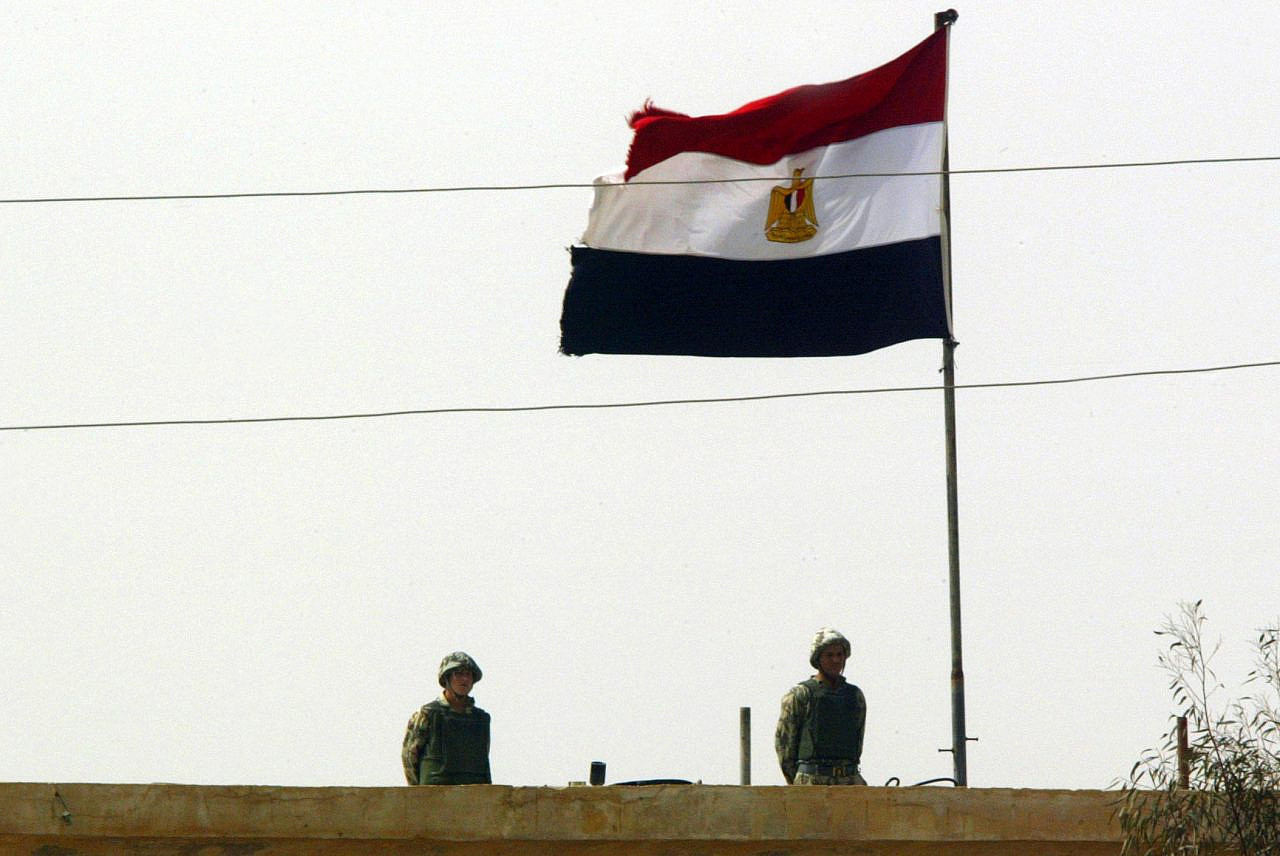 “We Egyptians understand each other,” the soldier told our driver. “We know what might happen if you disobey. Go to the back of the line, or else these people [my family and I] can die at the side of the road with no way to return home.”

We were the very last car in a checkpoint queue that lasted over two hours. It felt like a form of torture. The soldier was probably younger than me, yet was consumed with his power to be able to dictate which Palestinian can enter their homeland, and which he can send back. With this knowledge, we were silent. For my family, their journey was to return to their home. For myself, it was to find some peace in a land my family was exiled from nearly 75 years ago.

‘We are apparently not human’

I counted over 15 checkpoints from El Ferdan to the Arish, which sits on the Egypt-Gaza border and is the largest city in the Sinai Peninsula. At one point all the checkpoints seemed to blend together — there was no distinction between any of them except that they added to the suffering of Palestinian travelers with no regard for women, children, or the elderly.

The Al-Midan checkpoint outside Arish, however, was an exception. We arrived, hungry and tired, very late at night, and were forced to wait over six hours at an arbitrary barrier. We once again left the car and sat on the dirt roads as we waited. Every time we tried to seek comfort or entertain ourselves with fellow Palestinians waiting alongside us, a soldier ordered us back into our cars, with one telling us: “It looks like you like the situation you’re in, don’t you!”.

On top of our frustrations in being forced into such a situation, we weren’t even allowed to seek collective comfort.

The Egyptian soldiers who were supposed to inspect the cars were on their phones. One was scrolling through TikTok and another was messaging on WhatsApp, while hundreds of Palestinians were waiting in the middle of the night with nowhere to seek shelter or even a bathroom to relieve themselves. I recall one woman begging a soldier to let her car through, as she had an infant who had soiled herself and developed an intense rash, because the mother had no more diapers left. He brushed her off. 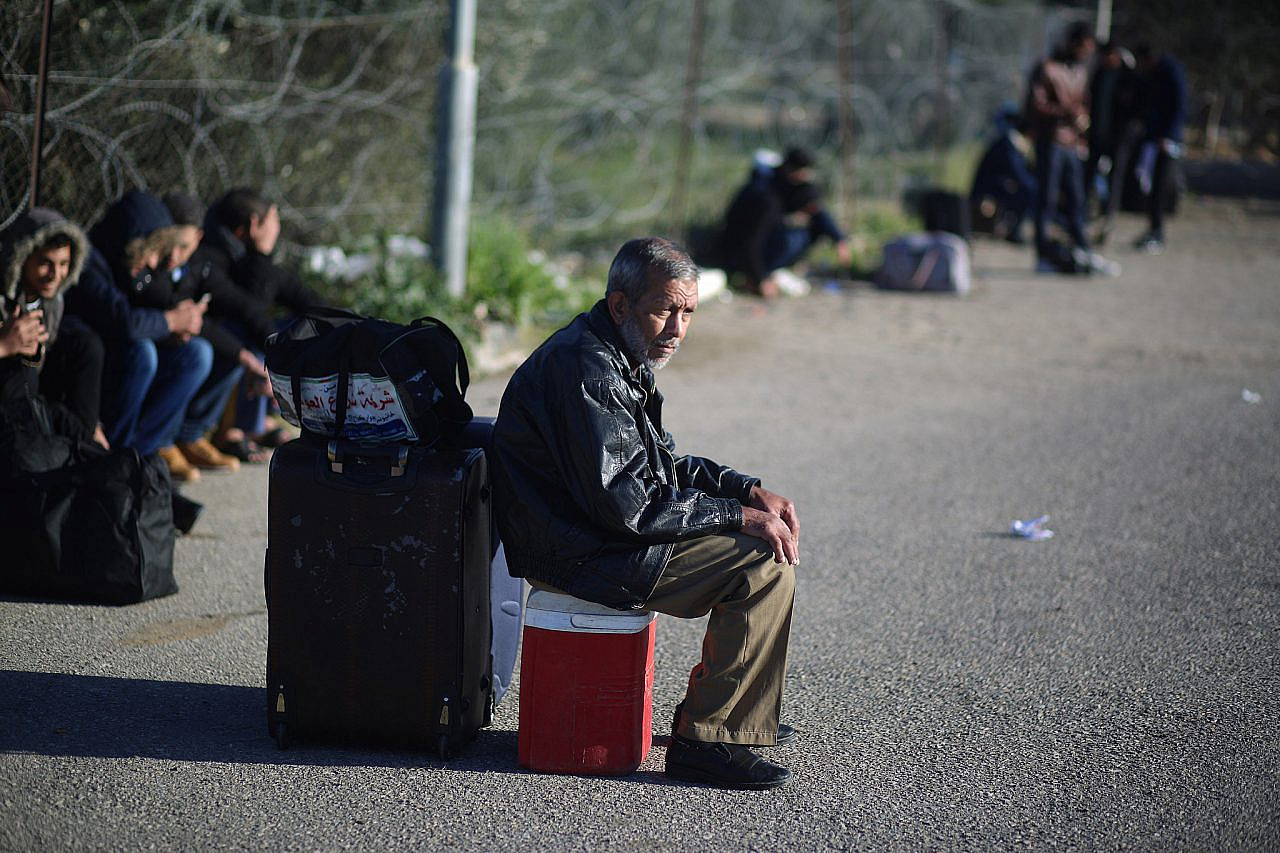 “We are apparently not human,” one elderly woman mumbled nearby.

When it was finally our turn, the soldiers at the checkpoint merely glanced at our passports, then waved us off. It was a complete waste of time that felt intentional — as if their orders were to delay our arrival for as long as possible.

When we finally reached the Rafah Crossing, after a whole day of travel, we thought the hard part was finally over. We were wrong, of course, but we  still had a renewed sense of excitement when we did finally get there.

In the hours we waited outside the Rafah border hall, there was justifiable anger, frustration, and exhaustion among all those present. One man tried to cut the line after having endured a three-day journey to get there.

“I am going to cut the line by any means necessary!” he yelled. “You think you’re the only one to experience hardship?!” another said. “All of us in this line were humiliated, go to the back and wait your turn like the rest of us!”

Egyptian soldiers looked on, wordlessly. They allowed chaos to ensue. In fact, chaos seemed to be the policy that the Egyptian military had adopted, leading Palestinians to their breaking points. We hated the situation we were in. In these moments, some even hated the fact they were Palestinian. One woman swore she would never repeat this journey ever again.

The hell we were in was not over, however. Inside the Rafah crossing hall, absolute chaos unfolded. Hundreds of Palestinians were lining up to hand over their hawiyyas and passports that Egyptian officials simply needed to stamp. Except this act was far from simple.

The border hall looked like a snapshot from the past, with filthy floors, no trash can in sight, ancient computers, and electricity that cut off every few minutes. In the prayer room there was actual shit on the floor, while the ceiling looked like it was about to collapse on you. 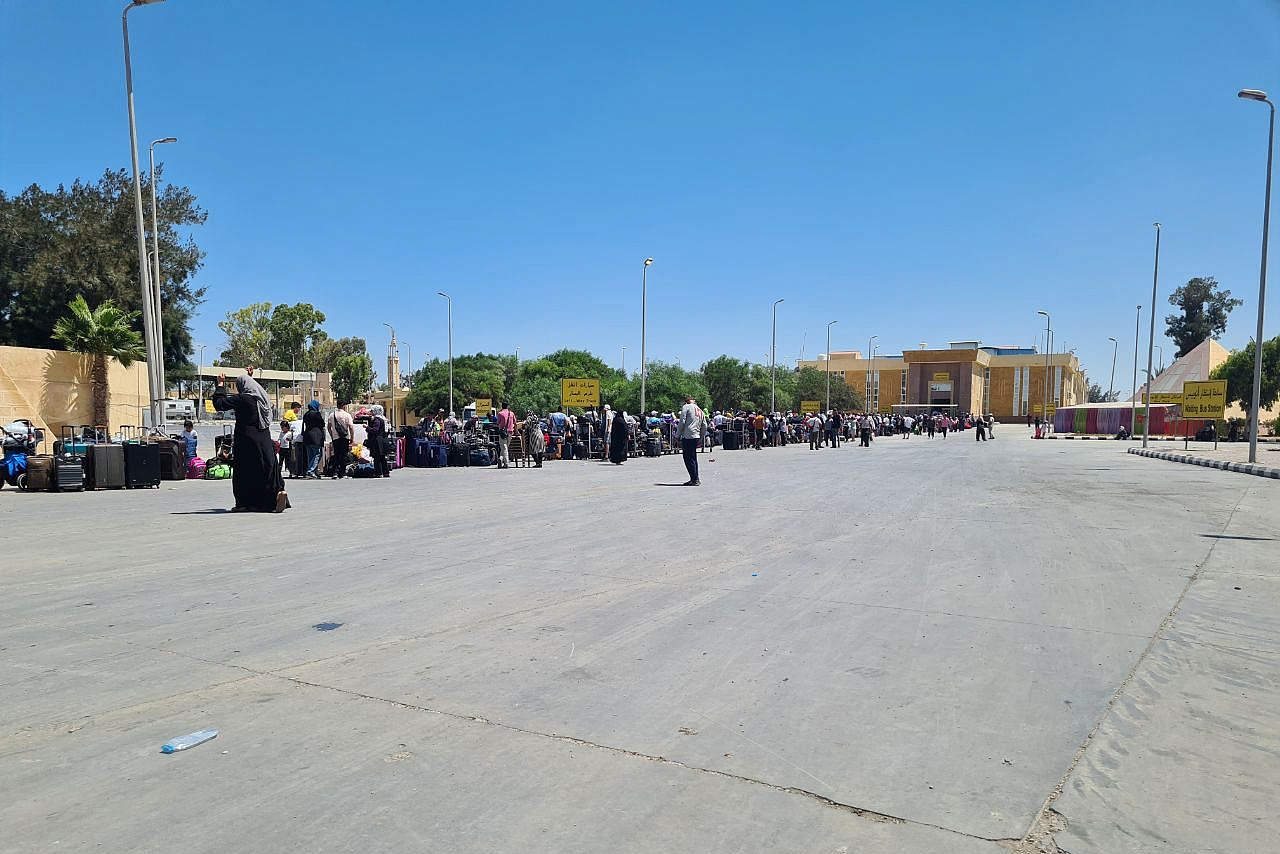 Palestinians stand in line at the Egyptian side of the Rafah Crossing. (Hebh Jamal)

Yet the most terrifying part of our journey was when what could only be described as a mosh pit took place due to Egyptian incompetence. While my son was in my arms, people pushed from all sides, afraid to lose their spots that they’d stood in for hours. Children were trapped underneath me with nowhere to go. One woman pleaded for me to hold her son so he wouldn’t get stomped while under her. My sister-in-law had to hold my son above her head so that he would not get injured.

I felt less than human at that moment. The Egyptian border security at the counter looked us dead in the eyes while he smoked his cigarette. “Look at them,” he said to his colleague. “They are trapped like cattle.”

One of them pointed at a woman standing next to me and said, “I swear to the mighty God that you will be the last person in this whole hall that will leave!” I did not know what she had done, but I did not want to end up like her.

I turned to say something to the officer. Anything. To yell, cry, curse at him. My mother-in-law put her hand on my mouth and held me close, knowing that if I said anything we would never reach Palestine. We would never go home. I could not do anything but cry.

Yet for a select few, the travel to and from Gaza can be easier, maybe even luxurious. While sitting on broken metal chairs, a room adjacent to the border hall was left ajar. Inside I could see leather couches in a nice air conditioned room and people serving drinks to those seated. These very few Palestinians traveled with a VIP travel service called Ya Hala and were sitting in its refurbished lounge away from the chaos and humiliation.

Ya Hala has links with the Egyptian government and security establishment and profits off of the siege by charging anywhere from $700 to $5,000 dollars per person to travel with the company which skips the checkpoints, the inspections, and the days-long waits. Palestinians without that kind of money, like the hundreds on the journey with my family, have to wait months or even years on waitlists in order to travel. 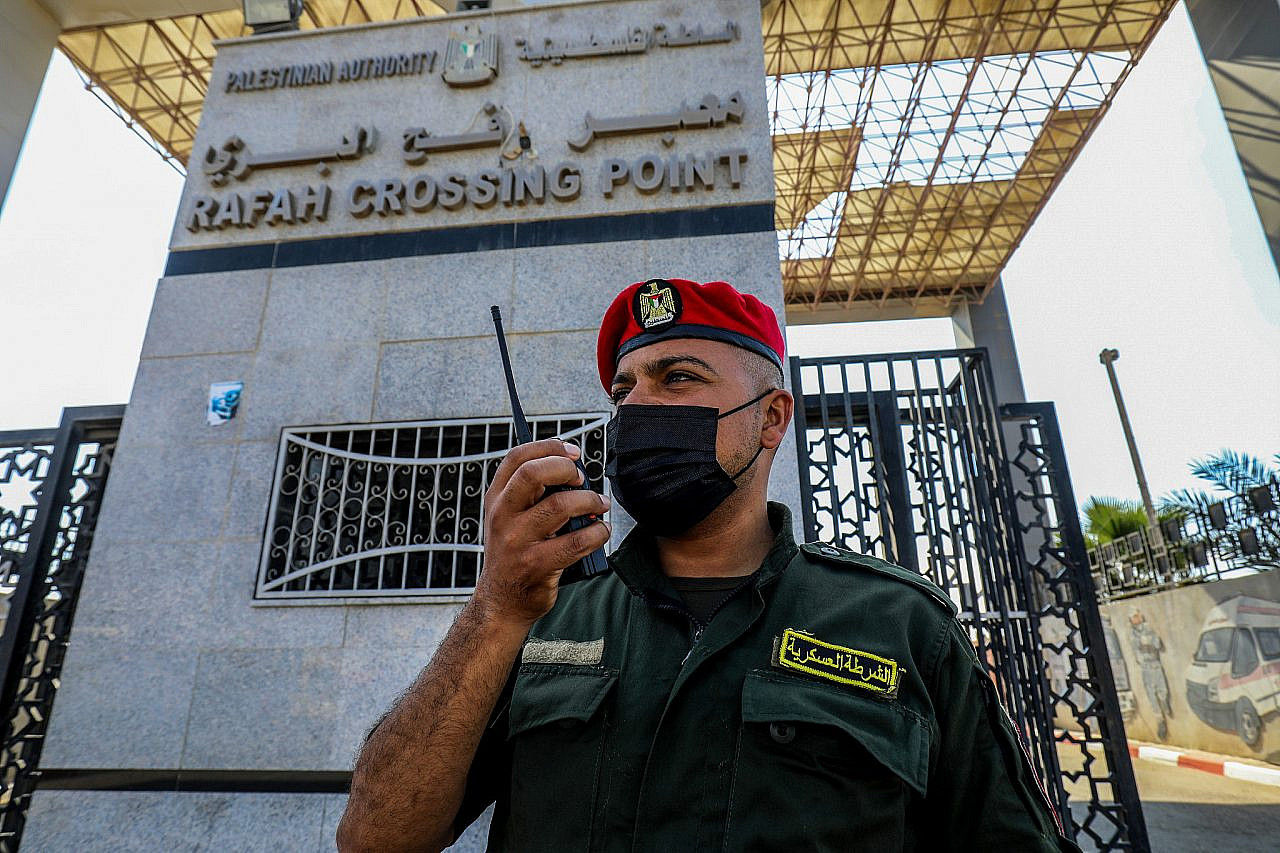 We spent over 12 hours at the Rafah border hall. When they finally gave us back our passports to leave (with the stamped visas that we bought for $35 per person, even though on the visa itself it says $25), we sat in the bus that took us to the Palestinian city of Rafah.

My family and I looked at each other in utter disbelief — not only that we had survived, but that the Egyptian-controlled hell we endured had not deterred us from our goal of seeing our homeland, and to see our beloved.

Despite it all, I will travel through the Sinai again and again — so long as it means returning to Gaza, a land full of love, beauty, and hope.