The separation barrier has isolated two families living near Bethlehem from their communities. While they are on the Jerusalem side of the barrier, they are also banned from most of the city. The courts and the state have little sympathy. 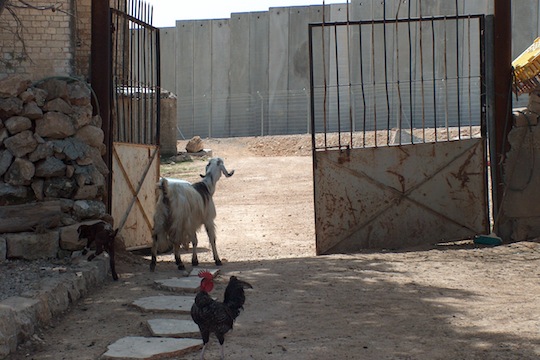 The Jadu family’s yard, 2005. One morning, the separation barrier was erected in their backyard. (Sarit Michaeli)

With these words, Supreme Court Justice Elyakim Rubinstein convened a hearing on the lives of the Zawahreh and Jado families on Monday morning, November 19, 2012.  Throughout the hearing, I wondered whether the justices were aware of Kafka’s presence in the courtroom. They must have noticed the representatives of the families in the courtroom, sitting in tense silence. They definitely heard the representative of the security establishment, who had the right – or more precisely, demanded the right – to approach the bench and speak directly with the justices, without counsel, and explain to them specifically what they must decide, and why they need not hesitate to continue harming innocent people. I wondered what would happen if one of the Palestinians, who are the reasons we had assembled there, would ask to be heard. I imagined him explaining, against the backdrop of large maps depicting his home, what his life is like today and why he too deserves to live like a human being.

The Zawahreh and Jado family lived in their homes for years, until one morning, the separation fence was erected in their backyards. The fence surrounds Rachel’s Tomb in the depths of the Aida refugee camp just outside Bethlehem. As fate would have it, the Jado family lives on the outskirts of the neighborhood, and their house was left on the Israeli side of the fence. Similarly, to facilitate the expansion of the neighborhood of Har Homa, the separation fence was built next to Beit Sahour – but on the wrong side of the Zawahreh family. So two Palestinian families were severed from their communities and stuck in Jerusalem, forced to travel long distances and pass through checkpoints in order to reach the families, schools, and doctors who the day before were just a few minutes away.

In 2006, the families petitioned the High Court and requested that the fence be moved, saying: We want to go home. We want to return to the community and city which we have always been a part of, to receive guests in our houses, to again travel home by car. The system grinned and refused. Disheartened, the families asked for lesser relief: grant us legal status as Jerusalem residents. If we’re going to be stuck in Jerusalem, at least we’ll be able to live, earn a living, and travel there. Once again, the system grinned and refused. At first, they granted the family permits to enter Jerusalem but not to work or drive there. But in 2009, another punishment was handed down: an absolute prohibition against their presence in Jerusalem. The families became prisoners in their own homes, granted access only to the Bethlehem checkpoint.

Over the course of years and numerous lofty court battles conducted by Association for Civil Rights in Israel (ACRI) Attorney Oded Feller, the merciful state slightly expanded the “living space” (yes, this is actually the official term employed by state representatives and court judges), allowed the families access to the supermarket in Har Homa, and granted them permission to pass through the Mazmoria checkpoint, which is normally open only to residents of the Mazmoria village. The Muslim Jado family was even allowed to realize their rights to prayer, and was granted a permit to access a house of worship – albeit the Christian church in Tantur, near their home.

That Monday in court, ACRI came to collect more crumbs on behalf of the families. We asked for the families’ “living space” to be expanded and for the state to permit their entrance into the Jerusalem neighborhoods of Beit Tzafafa and Tzaur Baher, adjoining their homes. Such access would allow the families to reach, with relative ease, a mosque (after all, they never decided to convert to Christianity), stores, and some kind of community in the city in which they are captive. The state of course was opposed. The justices understood that the people in question are innocent. In fact, the security apparatus has no position with regards to them – just a general position that Palestinians don’t deserve very much. The justices tried to persuade the state to allow the families to enter these neighborhoods just once a week. Again, the state refused. Justice Rubinstein realized that despite his pleading with the State Attorney’s office and the security forces that manage the separation barrier, he would not reach a conclusion in this case today.

We don’t have to look too far to find people in the world – and certainly in Israel and the Occupied Territories – who suffer far more than the Jado and Zawahreh families. But it’s not every day that one experiences such obtuseness. Obtuseness that fills the courtroom – fills it and spills over the bodies of those present.  Even Kafka learned something that day. Beyond the arbitrariness of the law, it is the grinning and trivializing that make the situation so grotesque – Kafkaesque to the utmost.  The justices did not grant justice.  Nor did they completely accept the state’s position. They simply tried to persuade the state to concede one day a week, to get it over with. The justices tried to gather crumbs, and all just so they could close a case that has remained open for so long.

Make no mistake about that morning: it was nothing out of the ordinary. The law that casts a menacing shadow over these families on the furthest outskirts of Jerusalem, the law that is implemented by the “Seamline Administration,” and of which the Supreme Court justices try to gather up crumbs – this law weighs heavily on you and me, no less than on the Zawahreh and the Jado families. For justice, we’ll just have to look elsewhere.

The writer is Public Campaigns Manager at the  Association for Civil Rights in Israel. This post appeared in Hebrew on Haokets.