Hours before Tehran and the P5+1 powers are expected to announce an historic nuclear deal, much of the Iranian media is expressing excitement, while the opposition worries about domestic backlash. An Iranian media survey.

“Fateful Monday,” “The Day of Truth” — those were the headlines of Iranian newspapers Monday morning, indicating the great excitement with which Iranians are awaiting the official announcement of a nuclear agreement between the Tehran and the P5+1 powers, which is expected sometime Monday.

As a rule, Iranian media coverage of the negotiations and agreement has been marked by longing, positivity and support. After years in which international isolation brought Iran’s economy to its knees, the Iranian public is hanging its hopes on the agreement and is impatiently awaiting an announcement of success in the talks. Expectations of massive public celebrations in the case of an agreement even led the Iranian police chief to put out a special message reminding people to keep their celebrations in line with Islamic law and national customs. 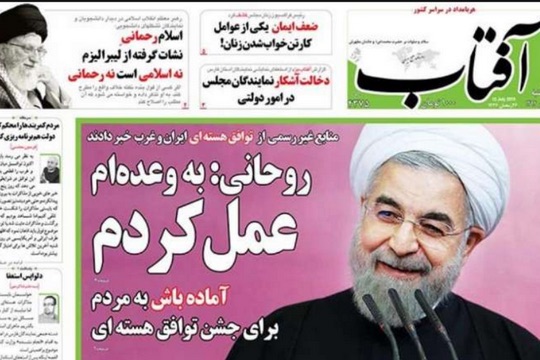 ‘Rouhani: I upheld my commitments’

That said, the tone of the coverage varies in accordance with the political affiliation of each media outlet. As might be expected, the economic papers are most excited about an agreement. In the newspapers affiliated with the reform and moderate streams in Iran, the two biggest apparent winners of the process  were presented as President Rouhani, whose response, “I upheld my commitments,” carried the front-page headlines of most of the newspapers, and Foreign Minister Javad Zarif, who came out on top of talks with the world powers. President Rouhani, whose time in office has been characterized more than once by significant tension with Supreme Leader Khamenei and the conservative party line he represents, is expected to earn some serious public opinion points. The regime’s hand was strengthened on no small number of social and civic issues as a result of a power struggle between the various camps, which among other things, led to a dramatic rise in the number of executions in Iran since Rouhani’s rise to power.

Among the media outlets that are identified with the Iranian opposition, the excitement about the expected nuclear agreement is far more tempered. As Ahmad Rafat wrote in +972, history teaches us that whenever the Iranian regime attempts to soften its foreign policy, it ratchets up pressure on opposition from within. It’s not surprising, therefore, that anti-regime websites and newspapers are highlighting that despite the historical importance of the agreement, the Iranian public’s real war is for civil rights and is being waged internally and not around the negotiating table in Vienna.

In an article on the Rooz website, journalist Ali Asgar Ramezanpour argues that immediately after a deal with the West is signed, there must be an effort to reach an internal agreement that begins to close the deep wounds opened after the 2009 presidential elections and the arrests of reform movement leaders Mir Hussain Mussawi and Mehdi Karoubi. Attorney and human rights activist and Nobel Prize laureate Shirin Ebadi has previously argued that an agreement with the West will not necessarily lead to an improvement in the human rights situation inside Iran. Actually, there is a very real fear among human rights activists in Iran that a nuclear deal will lead Khamenei’s conservative regime to become even more hardline in its domestic policies in order to show the public that a nuclear agreement does not necessarily mean a weakening of the regime. 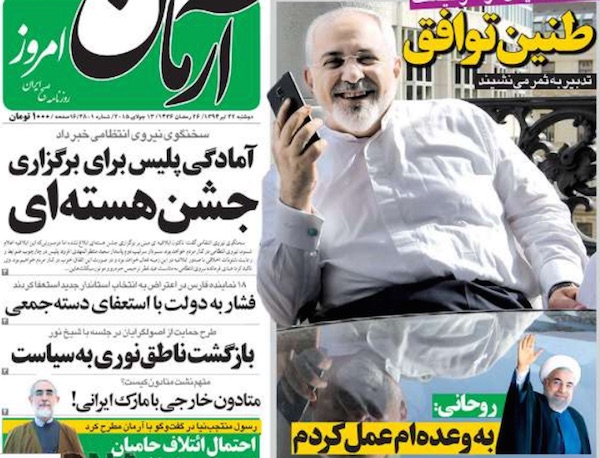 Also interesting is that the main headline of conservative newspaper Keyhan, whose editor in chief is thought to be one of the most powerful people in the Iranian media, was “Signing a deal in the Lausanne framework is a failure.” The newspaper’s editorial is critical of the fact that the agreement’s details were never presented to the Iranian public, and therefore there is no choice but to deduce from what was printed in the foreign press, specifically the American press, that the agreement is favorable to the West. If the Americans are so satisfied with the agreement, the newspaper argues, it must come at the expense of the Iranian people. The “Islamic Republic” newspaper, however, disagrees. Its top headline was that all of the economic sanctions on Iran will be lifted following the signing of an agreement.

But while the Iranian media is busy with celebrations and public excitement ahead of an official announcement, the E’temad newspaper chose to dedicate its front page to Israeli Prime Minister Benjamin Netanyahu, with unabashed Schadenfreude:

“Netanyahu’s loneliness — the world is waiting for a nuclear agreement, and Israel is scared of diplomacy’s success.” 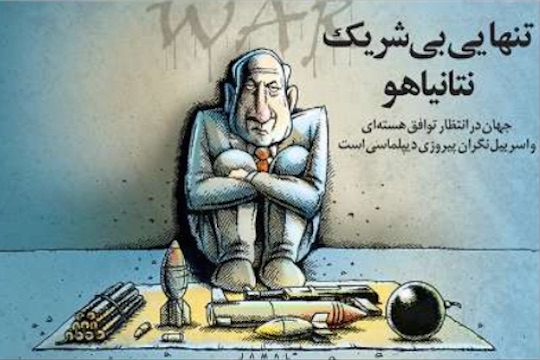