Sentencing Robert Bowers to death isn’t likely to honor the victims. What’s worse, it might build up the case for capital punishment for terrorists in Israel. 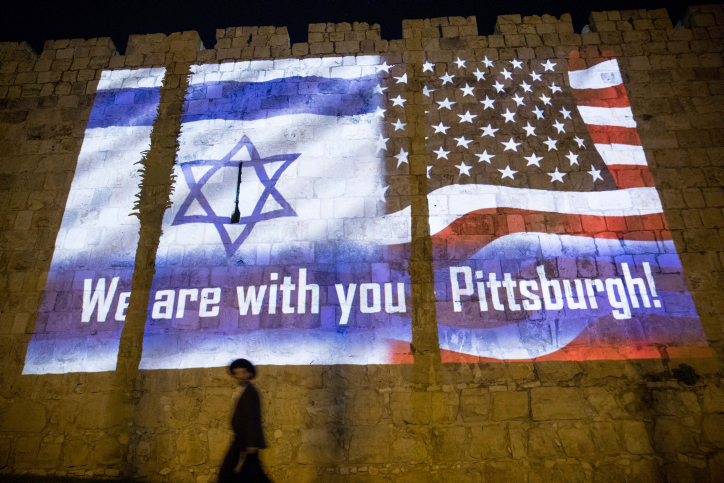 The Israeli and the American flags are screened on the walls of Jerusalem’s Old City, on October 28, 2018, in solidarity with the victims who were killed in a mass shooting at Pittsburgh synagogue. (Yonatan Sindel/Flash90)

Prosecutors are reportedly planning to seek the death penalty for Robert Bowers, suspected of murdering 11 Jews in a mass shooting attack as they celebrated a bris at their synagogue in Pittsburgh. They shouldn’t.

There is a human instinct that cries out to match the most awful crime with the ultimate punishment. As I watched the miserable news pour in, every face looked like someone in the synagogue where I grew up, in Brooklyn. Every time I saw Rabbi Myers speak of his congregants, tears flowed uncontrollably.

At moments, the pain this week ran so deep that even imagining death of the murderer feels unsatisfying — as if his one evil life somehow equals 11 innocent ones. Maybe there’s something worse: torture, suffering, hellfire.

But none of these ideas actually make me feel better; they disgust me. If emotions are a spectrum, the revenge side feels like a brick wall. Maybe that’s what prompted a woman from Charleston to say, “I forgive you,” to Dylann Roof, who slaughtered her mother at prayer. It was astonishing to see a woman at her darkest hour triumph over the worst and most natural of human instincts — I doubt I would be able to do it. In his book Between the World and Me, Ta Nehisi Coates admitted with candor that he felt “a great distance from the grieving rituals of my people,” when those whose loved ones had been cut down for being black, offer forgiveness in return.

But even Coates opposed the death penalty for Roof, who was convicted of 33 charges and sentenced to death in a federal court. Coates didn’t forgive Roof, but he thought about the kind of society he wanted America to be. For that, he looked to Dr. King:

“[E]ven if nonviolence isn’t always the answer, King reminds us to work for a world where it is. Part of that work is recognizing when our government can credibly endorse King’s example. Sparing the life of Dylann Roof would be such an instance.”

Although hackneyed by the tragic necessity of overuse, there is something to the entreaty “don’t let the terrorists win.” Robert Bowers represents an America that confronts difference by destroying it. He longs for an America where political opinions are expressed by violence, in which difference of opinion is punishable by death. in response, America should not enforce law and morality by killing a man. People at a memorial service for the victims of the shooting at Tree of Life Congregation, at a synagogue in Jerusalem, on October 29, 2018. (Yossi Zamir/Flash90)

Would killing him honor the victims? It’s unlikely. The large majority of American Jews, around 70 percent, vote Democrat. In 2016, 58 percent of Democratic voters opposed the death penalty, and just over one-third supported it according to Pew research; all Jewish denominations have publicly opposed capital punishment in various ways. Moreover, the trend in America at large was moving away from this method – in 2016, support for death penalty fell below half for the first time since 1965. Not surprisingly, nearly two years after Trump’s victory, support has risen six points, though it is almost unchanged among Democratic voters. Does the Jewish community wish to accelerate this support as part of Trump’s legacy?

This isn’t only about America. The crime has opened deep questions about the relationship between Israel and American Jews. Minister of Education and Diaspora Affairs Naftali Bennett’s visit caused controversy, just as Trump’s visit split Pittsburgh’s Jews — since both represent the racist, anti-migrant, and ultra-nationalist sentiment that many American Jews feel lay behind the attack.

Israelis are watching America, too. The current Israeli government is slowly but steadily pushing the death penalty in Israel. Defense Minister Avigdor Lieberman has advanced the measure since 2015, when he ran on the slogan “death penalty for terrorists!” In January, the Israeli Knesset passed a preliminary vote approving a law that would make it easier to rule for death penalty against terrorists, with the Prime Minister’s support. The bill is stalled at present, and Israel’s Internal Security Service (Shabak) and the Attorney General oppose it.

If Bowers is sentenced to death, Israeli professional and legal opinions will surely be trammeled by political opportunism. After all, how can the government claim Israel is the safest place for Jews if it can’t even match America’s merciless punishment for those who would harm Jews?

Death penalty for terrorists is a terrible idea in a country where the term ‘terrorist’ is used to describe everyone from a 13-year old girl wielding scissors, to those who call for civic protest such as boycotts (“economic terrorists”). In a more complex case, a family has demanded death penalty for a Palestinian suspected of killing their family member. The victim was a special forces soldier on a military operation in a West Bank refugee camp; he was killed when the accused threw a marble slab at him from a rooftop. While the family must be suffering terribly, the situation fits no normal definition of terror, which refers to politically motivated killing of civilians. Trying the killer of an armed soldier in an active military operation as a terrorist is precisely the mechanism by which death penalty could branch out well beyond.

But capital punishment is a terrible idea in general. Studies and meta-studies, including surveys of criminologists, show little to no evidence that it deters crimes. It has been abolished in the majority of developed countries; including Malaysia just a few weeks ago.

What would be a just punishment? My personal revenge would be for this man — the embodiment of evil and hate — to live out his days sharing a cell with a Jew, a migrant, a minority member or anyone else he hates; force-reading Maimonides, Martin Buber and Martin Luther King every day until his natural death, may he live till 120. I wish simply for him to stay alive without the freedom from his conscience that he would win in his death.

What if his conscience never strikes, because he is an irredeemable sadist? What if watching the anguish of the Pittsburgh community gives him only satisfaction? Maybe that’s the injustice of the human condition: some are evil and the rest of us must balance them by retaining a moral compass, by not becoming like them. If anyone doubts why executing prisoners is sadistic, read this.

But I believe any satisfaction he draws from the suffering of others would be short-lived. If Bowers keeps watching, he will see faith communities coming together; he will see Muslims speaking in solidarity with Jews and an Iranian student raise nearly one million dollars for the victims. He will see HIAS receive a flood of support to continue its work helping refugees and migrants; he will see Jews rededicate themselves to the cause he thought he could crush with brute force. Bowers should live to witness his utter failure.

In a world that seems committed to inverting the compass of right and wrong, maybe the tragedy can be a clarifying moment to recall what we know to be unambiguously wrong. Death penalty is one of those things.