The only Palestinian kindergarten in the Israeli-controlled part of Hebron is vandalized with threatening hate speech. Similar slogans found elsewhere in the H-2 part of the city.

Israeli settlers vandalized a Palestinian kindergarten in Hebron, spray-painting “Death to Arabs” on its wall, it was discovered this week. This is the only kindergarten in the Israeli-controlled section of Hebron to which Palestinian parents can send their three- to five- year-old children without them having to pass through an Israeli checkpoint. This is what the children saw when they arrived: 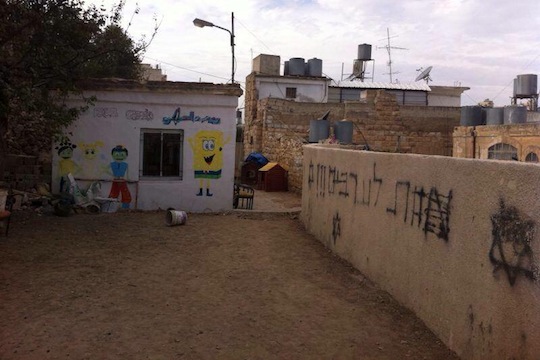 The kindergarten is located near Shuhada Street in H-2, the part of Hebron entirely under Israeli control and is home to about 30,000 Palestinians and 500 settlers. It is the site of some of the harshest restrictions on freedom of Palestinian movement in the West Bank.

The kindergarten was built over the last few months by volunteers from Youth Against Settlements (YAS), a Palestinian activist group coordinated by Issa Amro. Amro is the same activist whose home was stormed by IDF troops and used as a military training site during the Iftar holiday following Ramadan a few months ago.

Earlier this week YAS reported that settlers came to the kindergarten and tried to prevent them from working on it, in some cases pushing and shoving them. When Israeli forces arrived, they arrested Amro and a 15 year old based on settlers’ claims that they were attacked. After police saw a video recording of the incident, however, Amro and the teenager were released, according to YAS.

In a separate and weird incident this week, Israeli settlers sprayed the same signature “Death to Arabs” slogan on a door in Hebron’s wholesale market, also in H-2, right across the street from the largest settlement, Avraham Avinu.

Avner Gvaryahu from Breaking the Silence, who serves as a tour guide for the group in Hebron, described the second set of graffiti as bizarre because no Palestinians ever walk around that area because they are totally barred from it. In other words, no Palestinians will even see it. It’s just there for the Israeli settlers. 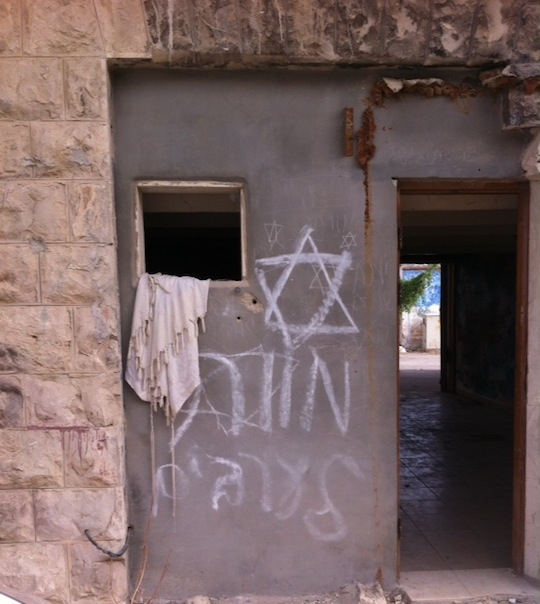