If Netanyahu’s government doesn’t come up with a solution, the army could soon start enlisting all of Israel’s ultra-Orthodox citizens. But while it is convenient to see the debate on a universal draft as a step toward equality, Israeli militarism should be challenged by decreasing the army’s size, not enlarging it. 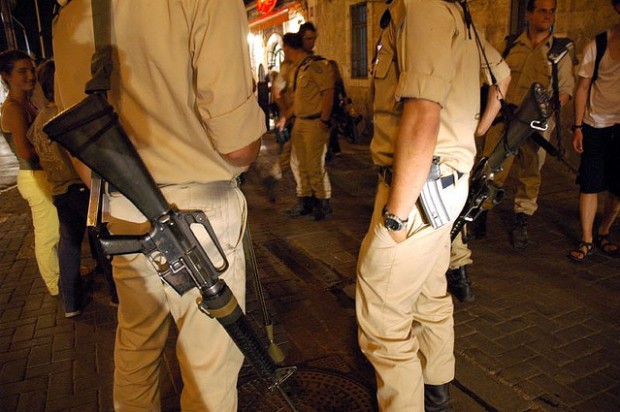 The deadline is closing in on Prime Minister Benjamin Netanyahu’s government to cross one of the most dangerous minefields in Israeli politics – that of national draft reform. In February, the High Court struck down the current arrangement – known as the Tal Law – exempting most of the ultra-Orthodox population from service. If the government does not come up with an alternative by the end of the month, the IDF could issue draft letters to the entire Israeli population (of draft age), including the ultra-Orthodox and Palestinian citizens, who are presently exempt from the draft.

It was Israel’s first prime minister, David Ben-Gurion, who decided to accede to the request of Rabbi Avraham Yeshayahu Karelitz (the “Hason Ish”), and allow a quota of yeshiva students to be exempt from military service. The numbers of ultra-Orthodox Jews who benefited from this arrangement were fairly small until the 1970s, when the religious parties formed a union with the Israeli right. As part of his coalition agreements, Prime Minister Menachem Begin gave the national religious a free hand in the West Bank, and the Orthodox had the quota on the number of non-serving students removed. The government also began giving a monthly stipend to every student who didn’t serve, which would be canceled if it emerged that he was also working for a living. The result was the emergence of an entire society which not only avoiding draft, but also removed from the Israeli workforce.

In the last three decades, populist politicians from the Zionist left believed that in addressing the draft issue, they had found the right’s vulnerable spot. More often than not, they were right: the secular middle class simply couldn’t bear the idea that tens of thousands were not only avoiding service, but actually getting paid to do so. The demand for a universal draft was part of the campaign that brought Ehud Barak into power in 1999, and it was in his time that the Tal Law, an unsuccessful attempt to lure the Orthodox into service, was passed.

The current demand for draft reform was driven to some extent by the J14 movement, which was, after all, a protest of the secular middle class. Not everyone backed it: the more progressive elements of the social protest prefer to focus on criticism of capitalism and a demand for better government services; but the conservatives who took part in the movement (among them the university student association) are rallying around the draft. At least three parties – Yisrael Beiteinu, Kadima and Yesh Atid (anchorman Yair Lapid‘s new party) – are also using this issue to separate themselves from the Likud and to lure independent voters.

Netanyahu is in a tough spot here: he fears that breaking away from the Orthodox will be very costly following the next election, when he tries to establish a new government. At the same time, he is aware that even his own voters are unhappy with the current arrangement. But the latest reports show that neither Kadima nor Avigdor Lieberman’s Yisrael Beiteinu are seriously considering leaving his government. This could still change: a large protest calling for an equitable draft, planned for this Saturday in Tel Aviv, could add to public pressure on the militant secular parties.

Here is Yair Lapid calling his supporters to take part in Saturday night’s rally, stating that Netanyahu “has betrayed most of the public in Israel, choosing instead the ultra Orthodox”.

It is tempting to see this issue as part of the demand for a reform in Israeli society and its political system, and the Israeli media does frame the current political crisis in this way. Yet considering the place the IDF has in Israeli society, there is no doubt that the draft reform campaign is not only using the militaristic nature of society here against the government, but actually strengthening it. The army is already the largest and strongest institution in Israel. It affects almost all aspects of life in this country, from education to the high-tech industry. While it does have some positive influence, mainly by serving as a tool for social mobility for Jews of lower socio-economics backgrounds, the army also strengthens nationalistic sentiment, anti-democratic trends and chauvinism. A thriving civil society must include more restrictions on the army, not demands to enlarge it. If those in favor of an equal draft were truly interested in the social integration of the ultra-Orthodox, they should pursue it through the workforce and the education system, not basic training.

The call for mandatory national service as an alternative to military service for Palestinian citizens – which is now an integral part of draft reform proposals – is further evidence of the dangers inherent in the current debate. The issue of rights and duties of the Palestinian population cannot be separated from institutional discrimination against Arabs, and from the Jewish nature of the state.

The army is often referred to as Israel’s melting pot, and service is believed to turn those serving into full Israelis. Yet as the case of the few non-Jews who serve proves, Palestinians can never be full Israelis because they will not become Jews, and Israel ultimately sees itself as a country for Jews. Even so, some Palestinian leaders agree to national service, but they demand to be part of the decision on the nature of this service. So far, the government has ignored them.

As always, it’s racist Avigdor Lieberman who has led the charge against the Palestinians. A couple of weeks ago, his party quit a government-appointed committee on the draft, demanding that the state apply mandatory service to Palestinians immediately, with a  mechanism to penalize those avoiding it. Netanyahu is not far behind: when he rejected the conclusions of this very same committee, he cited the low national service quotas for the Palestinian citizens as a reason, and promised to bring before the Knesset a law that would demand more from the Arab population. As much as challenges to Netanyahu’s government are welcomed, the current crisis can only be understood as part of a general conservative trend.

It is therefore encouraging to see that the more progressive of the J14 leaders, among them Daphni Leef, decided not to take part in Saturday’s rally, and are calling the public to take part in “a civil march” they will hold instead. The solution to the draft problem should be the opposite than the one the Knesset is debating these days – a gradual move to end the mandatory draft and to limit the influence of the IDF on Israeli society.

Orthodox Jews should be allowed and encouraged to work. As for the Palestinian population, it could be made to feel at home and take part in all aspects of society only within the framework of “a state for all its citizens.” We are still far away from that.