Israeli leaders like to claim that Jerusalem has never been an Arab or Muslim capital, and vowing that it never will be. But are they guilty of performing linguistic gymnastics and a selective memory of Israel’s legal commitments about the holy city? 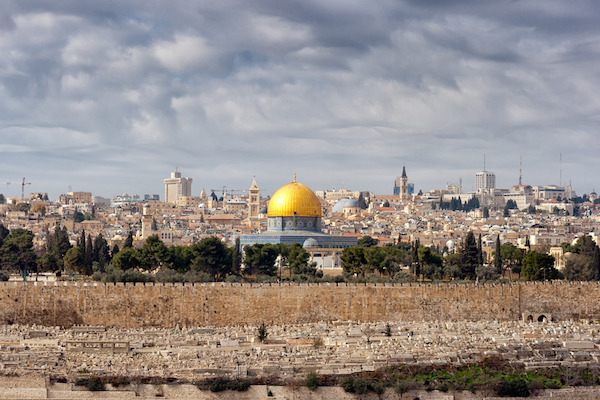 The Jerusalem skyline. (Photo by Shutterstock.com)

At a Jerusalem Day ceremony on May 17, Israeli Prime Minister Benjamin Netanyahu claimed that Jerusalem has always been the capital “of the Jewish people alone, not of any other people,” adding that Israel “will fight incitement, which stems from denial of our attachment to Jerusalem and our heritage.”

A decade earlier Ehud Olmert, Israel’s PM from 2006 to 2009, delivered a similar talk that might today help to better understand the sense of Benjamin Netanyahu’s words. Jerusalem, Olmert pointed out, “has never been a capital for any Arab or Muslim entity and will never be any part of a capital or any Muslim entity.”

Anyone with an interest in the eastern Mediterranean area will often come across analysis of this kind. These are theses often proposed by well-known figures within the international cultural and political landscape. Each of them, beside not bringing any real benefit to the interested parties, is vitiated by the transposition of values, uses and traditions negligible within the realities to which they refer to.

To claim that Jerusalem has never been the capital (from the Latin caput, ‘head’) of any Arab or Islamic entity is to ignore that the notion of ‘āsima, which in modern Arabic indicates the capital of a state, but which was unknown in classical Arabic, at least in its contemporary political–administrative meaning. This is even truer for citizenship, the concept that commonly indicates political belonging in the West and recalls the Greek polites (‘citizen’) and Latin cives.

Until the recent past, Middle Eastern languages offered no term to indicate such concepts. If in modern Arabic, the word jinsīya (from the root j-n-s, which in classic Arabic indicated – depending on the case – gender, race and class) was adopted, this may be traced to the necessity of introducing an idea functional for the interpretation of the locals by outsiders.

Al-‘āsima (singular form of al-‘āwāsim, “defenses,” “fortifications”), literally “the protector,” originally indicated the line between southern Turkey, Iraq and northern Syria, which divided the Byzantine Empire from the caliphates. This does not mean that in the Eastern Mediterranean notions for expressing the particular importance of a certain city were not acknowledged. For instance, writing in the early 9th century, Islamic scholar Yazīd al-Kalā‘ī (764–854) argued that “the holiest place [al-Quds] on Earth is Syria; the holiest place in Syria is Palestine; the holiest place in Palestine is Jerusalem [Bayt al-Maqdis].”

In the literary genre of Faḍā’il al-Quds (The Merits of Jerusalem), composed halfway through the 11th century and rich with material from the 7th and 8th centuries, the preminence of al-Quds (Jerusalem) and of the holiest places in the region were clearly praised. On top of this, it is important to remind that not only Baghdad or Damascus, but also Jerusalem, in the first period of Islam, played a role comparable with that of a “capital.”

The (mis)use of the concept of “capital” – like the equally frequent one regarding concepts such as state, border, citizenship and private property – should not serve as a tool for denying or undermining others’ attachment to Jerusalem. This is even more the case considering that since when the Jebusites founded Uru-Salem about 5,000 years ago, the Holy City had never been inhabited by a single people or religious group.

But well beyond historical and religious considerations, are the legal constraints to further confirm the problematic nature of the claim that only one people should have the right of self-determination in Jerusalem. The San Francisco Conference (April-June 1945) stipulated in Article 80 of the Charter that the United Nations had the necessary power to conclude trusteeship agreements that could alter existing rights held under the pre-existing Mandate for Palestine. In the Partition Plan (Resolution 181, November 29, 1947) the UN General Assembly clarified the will to establish an international trusteeship regime in Jerusalem.

Israel became a member of the UN only on May 11, 1949. Its first attempt to be accepted as a member state was rejected by the Security Council on the grounds that the issues of refugees, borders and the status of Jerusalem had not been settled. The admission was only approved after a second application, which followed Abba Eban’s official commitments (1915-2002) in front of the UNGA on May 5, 1949. “Negotiations,” Eban assured the UN, “would not, however, affect the juridical status of Jerusalem, to be defined by international consent.” None of the historical events of the last 65 years have the legal power to erase these assurances.

Lorenzo Kamel is a Middle East historian at Bologna University and a Research Fellow (2013-2016) at Harvard University’s CMES. Among his most recent publications: ‘Imperial Perceptions of Palestine: British Influence and Power in Late Ottoman Times’ (I.B. Tauris 2015) and ‘Arab Spring: The Role of the Peripheries’ (Special issue of Mediterranean Politics, May 2015, co-edited with D.Huber)