With East Jerusalem back in headlines, and despite a court order delaying the pending demolitions, police arrived in the neighborhood of A-Tur set to oversee the destruction of three homes.

Early Tuesday morning, scores of heavily armed, black-clad Israeli police officers arrived in the East Jerusalem neighborhood of A-Tur to oversee the demolition of three Palestinian houses. Some were mounted on horseback, others held muzzled dogs on short leashes. The owners of the houses were ordered to move their belongings outside. In an ensuing scuffle, at least two residents of the neighborhood were injured by the police, including one who, according to bystanders, had his leg broken. 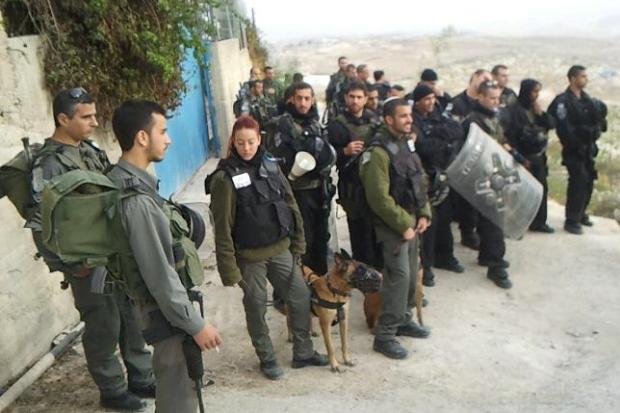 With bulldozers ready to begin demolition, lawyers representing the home owners scrambled to present the police with court documents proving the demolition would come in direct contravention of a recent Israeli High Court ruling on their case. After a short period of back and forth between the lawyers and the police, the latter left the scene and the families began moving their belongings back into their houses. 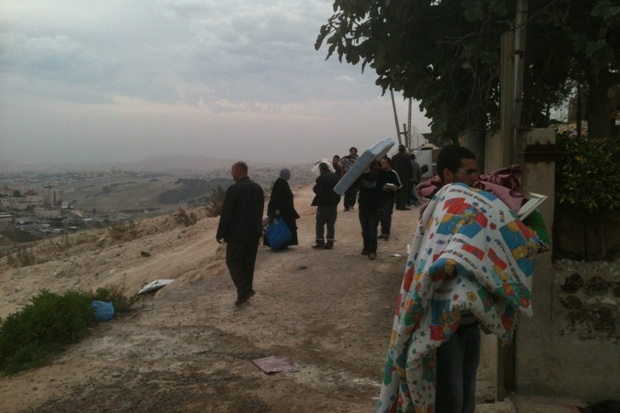 Palestinian residents in A-Tur (East Jerusalem) taking their belongings from a house that was set to be demolished (photo: Moriel Rothman)

According to Nazeeh al-Ansari, a resident of A-Tur and the director of the A-Tur Community Center, the demolition orders on the houses are years old, but the threat to carry them out is recent. “In October, we appealed the demolition notices in the Jerusalem District Court. They rejected our appeal, so we went to the High Court of Justice on November 27, and the High Court accepted our petition and ordered to freeze the demolition for 60 days until a new decision would be reached,” said Al-Ansari, who forwarded me a copy of the decision, part of which is included below:

The existence of the aforementioned documents – which, when presented to the police, served as sufficient reason for their dispersal and prevented the demolition – gives cause for a number of questions: Why did the police come to carry out the eviction despite the court-ordered freeze? What is the connection between this morning’s event and the planned creation of the “Mount Scopus Slopes National Park” on the private lands of Issawiya and A-Tur? (Including, potentially, the land on which these three houses sit.) And what does the timing of this attempted demolition have to do, if anything, with the Israeli government’s recent decision to collectively punish Palestinians by resuming settlement construction in occupied East Jerusalem and the nearby area of E1, following the PA’s successful bid for recognition as a non-member observer state in the UN? 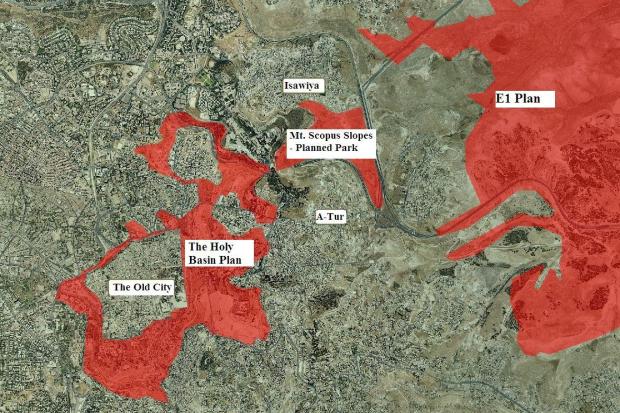 These questions are difficult to answer, but it is important to emphasize two relevant facts:

First, these houses and this section of A-Tur are located directly within an area that the Israel Nature and Parks Authority and the Jerusalem Municipality hope will become part of the “Mount Scopus Slopes National Park.” The plans for this National Park were launched last winter, but have since been delayed, as a result of both public pressure and legal advocacy.

Second, this park would not only serve as a means for confiscating private Palestinian land in East Jerusalem, it would also, according the research group Terrestrial Jerusalem, be a bridge that creates a “geographical link between the Old City basin and E-1.”

Israel’s declaration of its intention to build 3,000 new housing units in East Jerusalem and the West Bank have been calculatedly vague and nebulous, so it is difficult to verify the connection between the government’s recent retaliation against the Palestinians and the events of this morning. But the timing of these planned demolitions could facilitate a territorial linkage between occupied East Jerusalem and E1 area, which has recently returned to headlines. We should pay close attention to similar attempts in coming days and weeks to destroy Palestinian property and evict Palestinian residents from sensitive areas in East Jerusalem, including Silwan, Issawiya, A-Tur and other neighborhoods.

Related:
Following E1 decision, Israel is more isolated than ever but not likely to change course
Resource: What is the E1 area, and why is it so important?
Palestinian President Abbas: The only leader fighting for the Jewish state