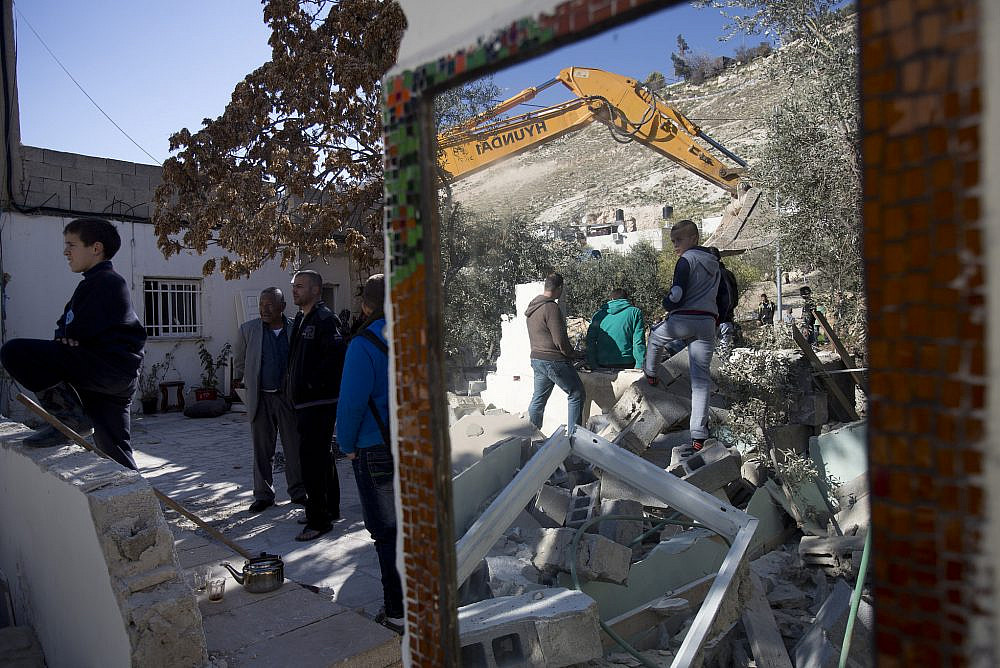 The Mezri family demolish their own home in Jabel Mukaber after learning that they would be forced to pay the Israeli authorities for carrying out the destruction, East Jerusalem, February 5, 2014. (Tali Mayer/Activestills.org)

On Feb. 28, dozens of Palestinians from across Jerusalem came to Jerusalem City Hall to protest the municipality’s decision to demolish dozens of houses in Jabel Mukaber, a village that Israel annexed to the city in 1967. Under the pretext of expanding a major thoroughfare that runs through the village into a highway, the demolitions provide a case study in how the supposedly unified city treats half of its population.

The protests, which have been taking place outside City Hall every week for the past month, represent a new development in the way Palestinian Jerusalemites protest for their rights in the city. “Palestinian residents used to organize their protests strictly within their own neighborhoods,” says Pepe Alalu, a former deputy mayor who represented Meretz on the city council for 17 years. “Aside from maybe one protest concerning education, this is the first time I remember Palestinians protesting in the city center, in front of City Hall.”

Although the protests are focusing on the expansion of the city’s so-called “American Road,” the problem goes far beyond a single proposed highway. According to Muhammad Aliyan, an attorney representing some of the residents, there are 5,000 demolition orders pending for Jabel Mukaber alone. “We’re talking about a village of 32,000 residents,” he says. “You could count the areas designated for housing on one hand. And meanwhile, the Nof Zion [Jewish] settlement was greenlighted for construction in the very heart of the village. And houses are being demolished as we speak.”

The Jerusalem municipality, for its part, is so far refusing to engage with the protests. “The residents have picketed City Hall four times now and no one came out to talk to them,” says Alalu. “When it’s Jews protesting, even if they’re just ten people, someone is sent out to talk. The residents also requested representatives to come up from the picket line to talk to the mayor or to the director, or to anyone, but they were ignored.”

The American Road earned its nickname as a result of the Jordanian government contracting an American company to build a highway between the north-east and the south of the city while East Jerusalem was under Jordanian control. However, the project was cut short when the Israeli occupation of the city began in 1967, and the road, like much of East Jerusalem’s infrastructure, was allowed to fall into disrepair. 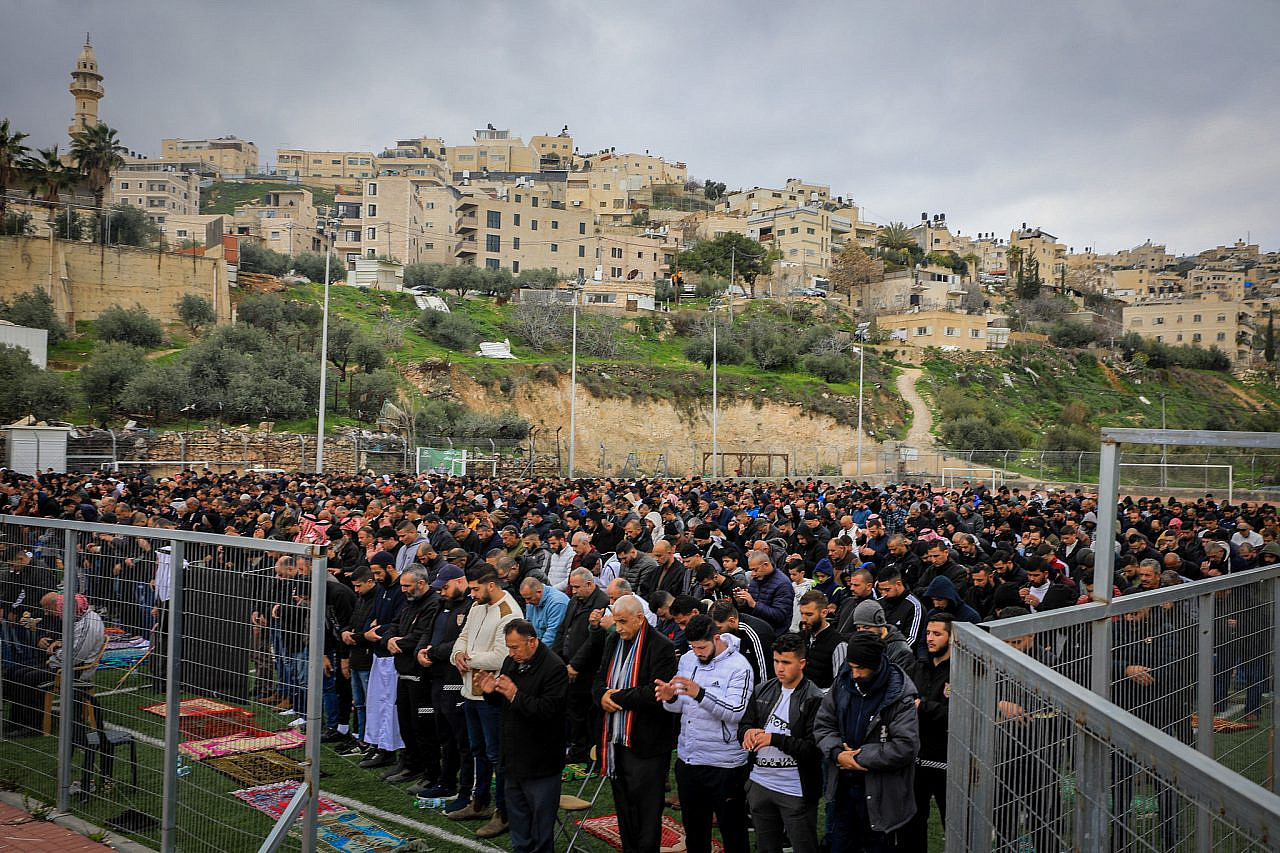 Palestinians perform Friday prayers as they protest against the demolition of houses by the Jerusalem municipality, Jabel Mukaber, Jerusalem, March 4, 2022. (Jamal Awad/Flash90)

In the 1990s, the Jerusalem municipality developed urban plans for Jabel Mukaber. According to these plans, the American Road is supposed to turn into a major highway spanning 32 meters across, with additional space for “landscaping” on either side. These landscaping zones essentially block any possibility of urban development along the road.

“The first objections were filed to the city architects in 1999 by residents living along the road, who sought to retain the land as residential,” says architect Efrat Cohen-Bar, deputy director at the planning NGO Bimkom — which was born out of the struggle against the road’s expansion. “When the architects tried to investigate what could be done, they were repeatedly stonewalled by the authorities who said there needed to be a new planning policy in place before any plans could be moved forward.”

Over the years, the strip of land intended for the highway filled up with dozens of residential homes. The municipality’s plan to expand the road was delayed for years, but the residents’ attempts in the meantime to have the land authorized as a residential area failed.

In the early 2000s, a new plan was proposed for a ring road that would connect the settlement of Ma’ale Adumim to southern Jerusalem, the central part of which would have run parallel to the American Road. This new highway was meant to free the American Road from its role as the main link between the neighborhoods and to allow it to be used for commercial and residential development, as the residents wanted. However, the authorities insisted on retaining the landscaping zones — which at this point exist only on paper, having already been filled up with homes — and allow for new housing developments only further afield.

“At the time, there was talk that this area could accommodate up to 7,000 housing units in four- to six-story buildings, along with public areas,” Cohen-Bar says. “This used to be [former mayor Nir] Barkat’s flagship plan; he wanted to show everyone that he is helping the Arab population too. But he couldn’t push it past his coalition partners, who wouldn’t let him authorize this many housing units for Palestinians.

“So the number of units was reduced more and more until eventually they approved a plan with only 2,500 units, an enormous green area, and an expansion of the American Road to 32 meters wide,” Cohen-Bar explains. Now, the dozens of structures within this area are up for demolition. 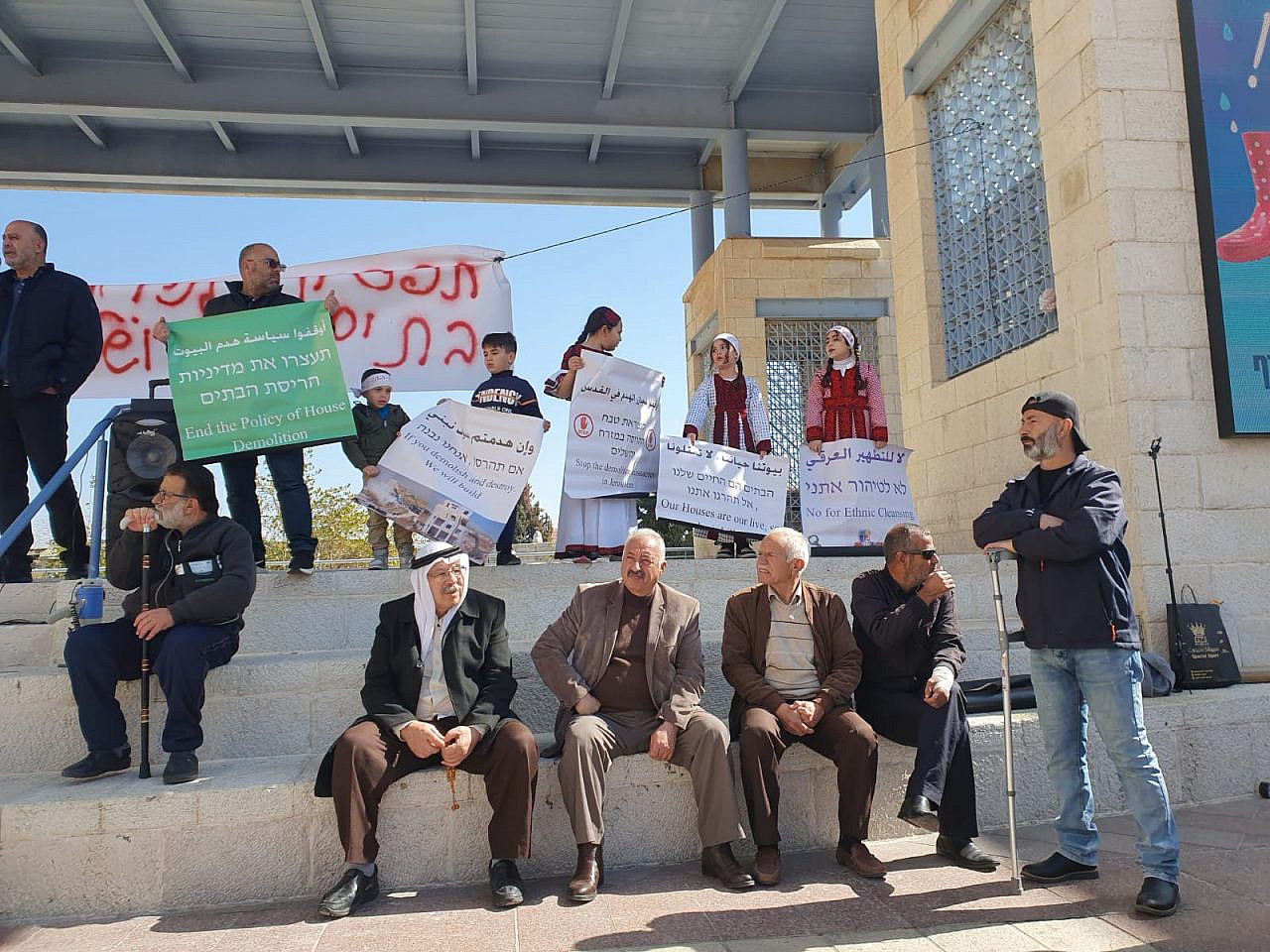 Palestinians protest outside Jerusalem City Hall at the planned demolition of dozens of homes, which will make way for an expanded road, Jerusalem, February 28, 2022. (Orly Noy)

“If City Hall wants to solve it, it can solve it,” argues Alalu, recalling how a planned road that would have run through the Jewish neighborhood of Neve Yaakov was moved to avoid demolishing a single grave. Instead, he sees what’s happening in Jabel Mukaber as part of a wider Israeli strategy of minimizing Palestinian presence in Jerusalem.

“The municipal policy is to allow as few Palestinians as possible to live within city limits,” Alalu says. “This policy is achieved in three ways: house demolitions, evictions under the pretext of restoring the property to its Jewish owners — as in Sheikh Jarrah — and, finally, the utter absence of planning and development.”

In Cohen-Bar’s eyes, what the municipality is trying to implement in Jabel Mukaber is a “terrible plan.” She explains: “It proposes massive construction but allows far too little residential building and far too many employment areas. Moreover, the road cuts through a very steep hillside, and the new construction is aligned to a wide road that exists only on paper. So there’s a gap between the buildings and the road, in places 16 meters wide and three stories deep. It’s a proper pit between the planned buildings and the existing road.”

Alongside the flawed construction plan, the municipality has also launched a project to upgrade the existing American Road, which is now nearing completion. But even the most imaginative visitor to Jabel Mukaber would be hard-pressed to envision the highway that the municipality ostensibly wants to create in the place of this narrow, steep, crumbling road.

“This is a severely neglected area that city officials never visit unless they come to demolish something,” says Aliyan. “Now it’s gotten worse, because the plan for this route through Jabel Mukaber has already been approved and implemented.”

In 2017, the municipality agreed with the residents that no houses would be demolished in the first three years of the roadworks, and then residents would have another two years to legalize existing structures and acquire building permits for their land. “But the plan got stuck in the municipal pipeline,” Aliyan explains, “so the five years were wasted promoting the urban building scheme, with no mechanism for the residents to propose their own construction plans — and now the city officials are here to start demolitions. 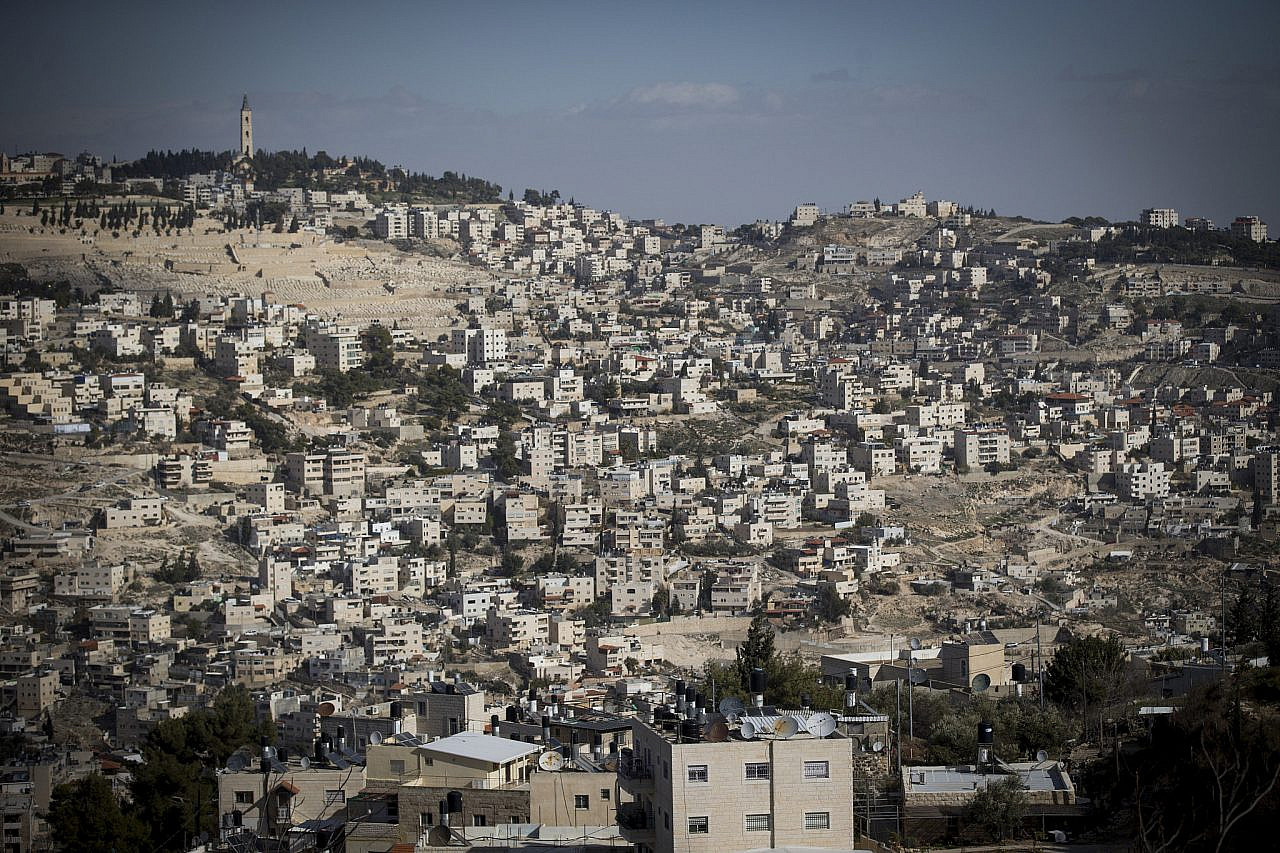 “The residents are saying: ‘if you spent those five years promoting the urban building scheme, at least give us time to try and get our permits.’”

Another obstacle facing the residents is the notorious 2017 Kaminitz Law, which increased the maximum prison time for those convicted of building without a permit, and which primarily affects Palestinians. “Some places are allocated in the plan as green areas, hospitality or commerce,” says Aliyan. “So according to the Kaminitz Law, if the land designation doesn’t match the building that’s already there, the court is blocked from offering an extension, even if you’ve only just now started litigating for a permit. In other words, if the municipality chooses to force a new land designation onto existing homes, there’s no way to get these homes approved retroactively.”

When I visited the village myself recently, I met with Nabeel Bashir, one of the leaders of the residents’ protests whose lineage goes back seven generations in Jabel Mukaber. He was standing across the road from his home — one of those threatened with demolition — which is built on the steep slope the municipality is supposed to even out with gravel to allow for the highway’s construction. “They want to prove to us that Jerusalem is a united city,” he told me. “Let’s say it’s united, what do I care? But not at my expense. Not at the expense of our homes.”