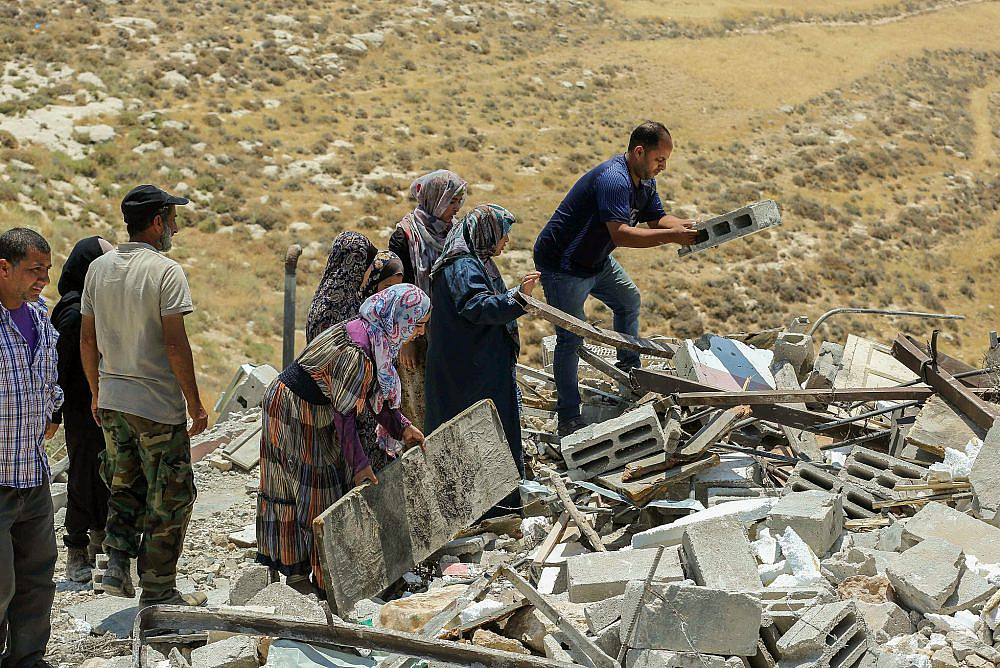 Palestinians sift through the rubble after Israeli forces demolished their home in the hamlet of Khalet al-Daba, in the occupied West Bank, June 17, 2019. (Wissam Hashlamon/Flash90)

It was 7 a.m. on Tuesday, and there were new messages in the WhatsApp group for Masafer Yatta in south Hebron, the area where I live, which is under Israeli occupation.

At first, people were wishing each other good morning. A minute later, a friend from the nearby community of Umm al-Kheir sent a voice message to the group: “Bulldozers! And army jeeps! And white cars belonging to the Civil Administration. They are on their way to Masafer Yatta.”

I immediately called Nasser, another Palestinian activist, and we got our cameras ready. We got into the car, and started to follow the forces of destruction that had gathered in the nearby Israeli settlement of Ma’on.

Why there? Because yesterday, Ilan, an inspector from the Civil Administration, Israel’s military government in the occupied territories, paid a visit to the area, taking photos of a few homes and tents in these villages. Ilan usually comes to take photos or hand out demolition orders a day or two before large-scale demolitions take place. For me, as an activist, and for many in my community, these visits are an ominous and frightening sign.

At 8 a.m., the bulldozers set out from Ma’on toward al-Rakiz. They demolished most of the homes in this community over the last half year. This is where my friend Harun Abu Aram was shot in the neck just two months ago. 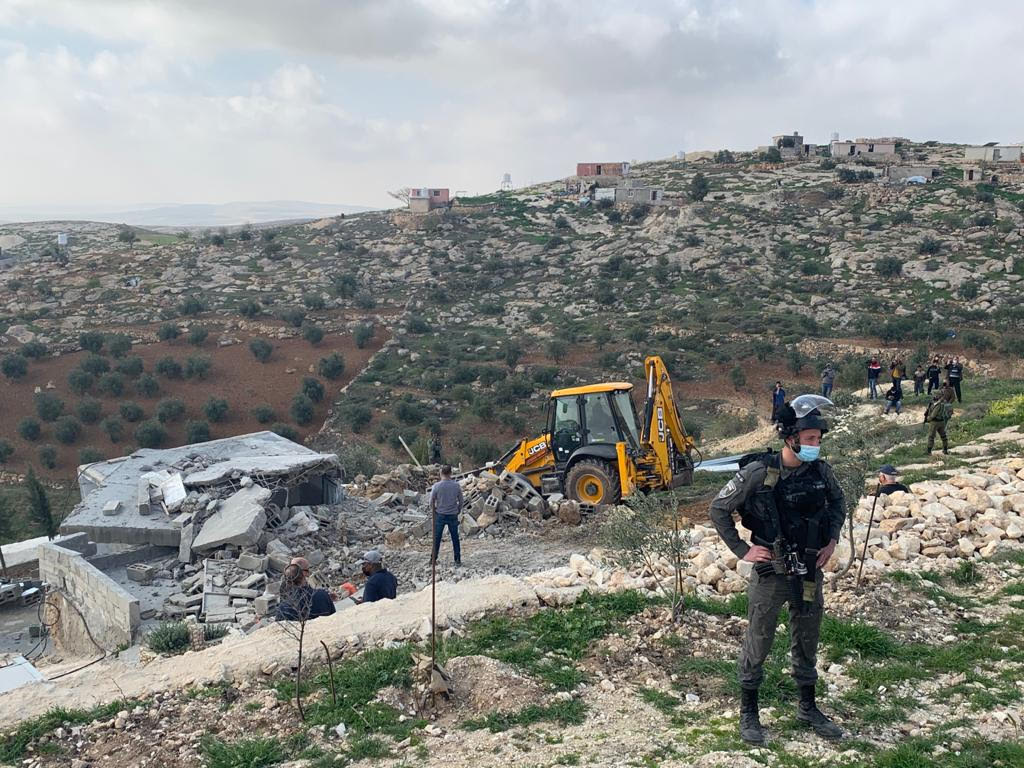 We ran to our car with cameras in hand and followed the bulldozers. I told Nasser: “They will definitely demolish Hatem’s tent.” Two weeks ago, the Civil Administration served Hatem a 96-hour order; such orders are meant to hinder our ability to appeal to the court to try stopping the demolition, since Israeli forces can come and destroy the structures four days after the order is served.

We jumped out of the car and ran to Hatem’s tent. But the bulldozers did not stop in front of it — they continued on the dirt road toward Khalet al-Daba.

I ran back to the car. Three Palestinian journalists from Hebron also arrived to photograph the destruction. I gave them a lift.

As we drove, one army jeep lagged behind the row of military vehicles, aiming to slow us down. I tried to overtake it, but it kept blocking me. At some point, the jeep stopped, and soldiers stepped out. They erected a makeshift checkpoint to stop us from moving forward. I left my car on the side of the road and started running toward Khalet al-Daba.

When I got there, I saw soldiers expelling the residents of three homes. The homes belonged to a young man named Jaber and his brother Amer. Jaber is a good friend and a fellow activist; we’ve gone to many protests together, and even slept overnight at Khan al-Ahmar in solidarity with the residents there who are facing potential eviction. 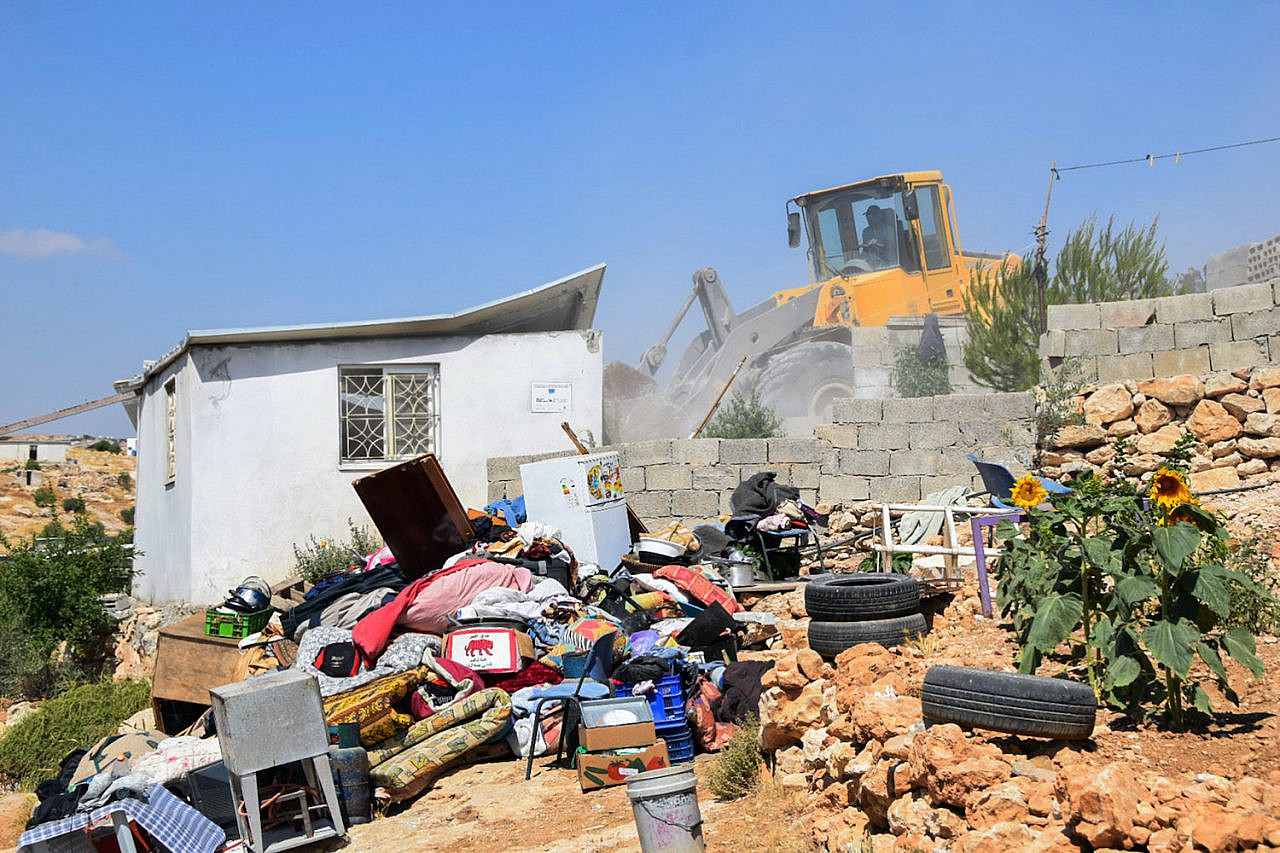 Israeli authorities demolish a house in the hamlet of Khalat al-Daba, in the occupied West Bank, June 17, 2019. (Wissam Hashlamon/Flash90)

It was difficult watching them demolish Jaber’s home. It was the fifth time his and Amer’s homes have been destroyed; but he always builds, because he has no other land.

The bulldozers began tearing into the walls of the home, and Jaber asked the soldiers to present a demolition order or any other document. But all they did was show him a paper declaring the area a “closed military zone,” before threatening to arrest him.

These are the same soldiers, part of the Israeli Border Police, who just months ago recognized Jaber driving a Palestinian taxi, removed him from the vehicle, pulled him to the side of the road, and beat him mercilessly. They did this out of revenge, Jaber told me, after he yelled at them when they came to demolish his home for the third time.

But Jaber is a brave person, and on Tuesday morning, when the soldiers were destroying his house for the fifth time, he asked to see a demolition order. They pushed him and his family away from the site. “Get away from the house,” they told him. Jaber’s mother cried; I saw the anger on her face. Her children stood on the side, held her hand, and they cried together while the soldiers tore down the home. 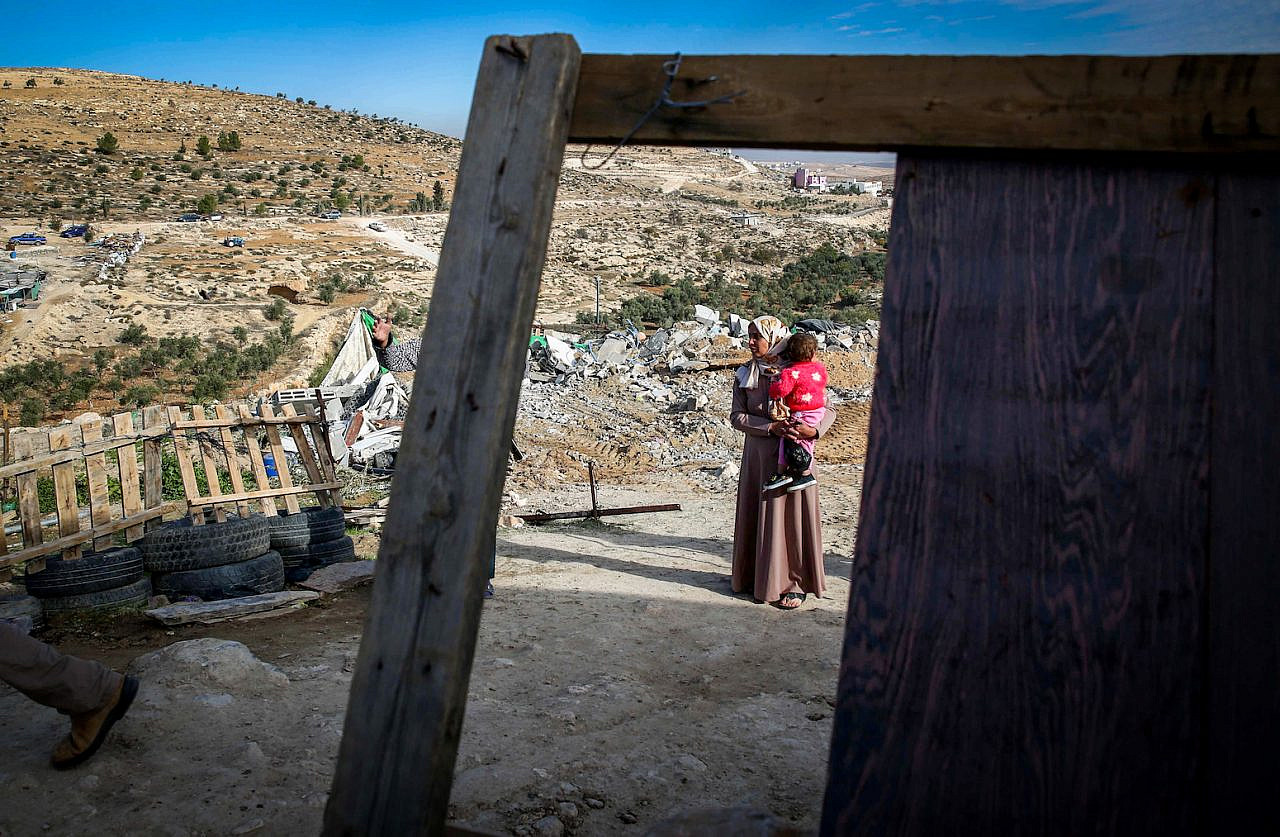 Palestinians look as Israeli authorities demolish a tent in Masafer Yatta, in the occupied West Bank, on November 25, 2020. (Wissam Hashlamon/Flash90)

As an activist, these moments fill me with despair. I stand there, and all I can do is film, and it breaks my heart. I hope that one day I will have the ability to truly help these children.

The bulldozers began to demolish Amer’s home, before returning  to destroy Jaber’s living room and kitchen. When they finally left, I saw Jaber and his brothers beginning to clear away the rubble that blocked the entrance to the village’s ancient, underground stone caves.

Masafer Yatta is full of these structures; most of the families in this area, including Jaber’s, once lived in these stone homes. Today, the residents prefer to live in homes above the ground and to be connected to electricity and water. The army refuses the residents’ requests for building permits, and refuses to develop a master plan for the communities in the area. The goal is clear: to expel us to Yatta, the nearest Palestinian city.

Now, Jaber has no choice but to go back to the underground cave, which is by no means big enough for his family. I approached Jaber. He was agitated, pointing to his kitchen utensils — half of them were thrown out by the soldiers, and half of them were left inside, buried under the rubble. 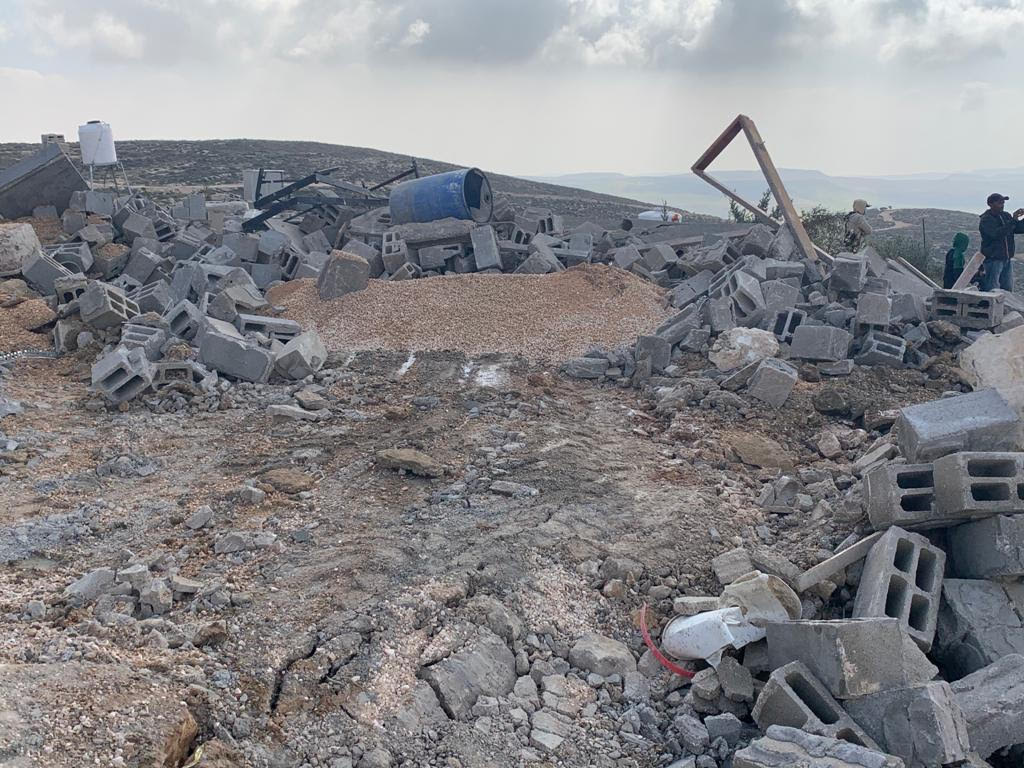 Jaber told me that since his house was last demolished three months ago, he had devoted most of his time and energy to rebuilding it. He told me how Ilan, the Civil Administration inspector, deliberately takes revenge on him — it annoys Ilan, Jaber said, that he continues to build.

“Ilan does not give me a demolition order,” Jaber told me. “He is patiently waiting for me to finish building, for me to finish investing all my money and energy, and as soon as that happens — he comes to demolish, to maximize the damage.”

On my way back, I saw the bulldozers had stopped at al-Rakiz. As we headed there, the soldiers stopped us and asked for our identity cards, in order to detain us and prevent us from taking photos.

Although there is no law that prohibits the documentation of house demolitions, lately, soldiers have been setting up checkpoints to prevent us from entering the villages, so that we cannot film what is happening there.

The goal? Judaization. The means? A military exercise in the middle of a village
As the residents of Jinbeh await the High Court to determine their fate, Israel's army decides to hold a large exercise right in the middle of their village.
By Yuval Abraham February 5, 2021