Army stops ambulance carrying injured demonstrators three times before letting it continue to a Ramallah hospital. Clashes between army and demonstrators continue into the night as the army used tear gas, rubber bullets, sound bombs and live ammunition while taking over civilian houses. 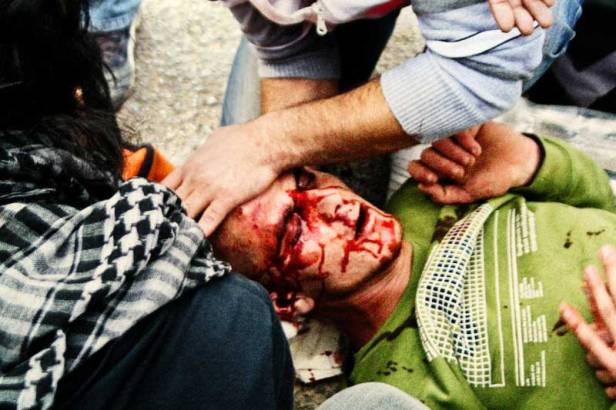 Before the weekly demonstration against the confiscation of village land, the Israeli army sealed off Nabi Saleh and began patrols in the village. As the peaceful march began the army responded with excessive tear gas. The demonstration then spread to various corners of the village as pockets of youth responded to the army’s violent incursion by throwing stones. In the midst of one of these clashes, soldiers fired directly at demonstrators, basically turning the tear gas canisters into large bullets.

The residents of Nabi Saleh have been holding regular demonstrations against the continued confiscation of their lands by the adjacent Jewish-only settlement of Halamish since December 2009. Protests began after settlers, abated by the army, forcefully took over a natural spring belonging to the village.

One protester was directly hit in the back of the head as he was trying to take cover from the tear gas. The protester required immediate medical attention and as medics attended to him, the army covered the area with repeated rounds of tear gas leading to a scene of absolute confusion.

The ambulance that was sent to evacuate the injured protester was held at gunpoint for long minutes by soldiers manning a checkpoint at the entrance to the village. Then, on its way out of the hospital, it was held at checkpoints twice more, despite the wailing siren. Eventually, an ambulance was able to evacuate the injured protester from the village. 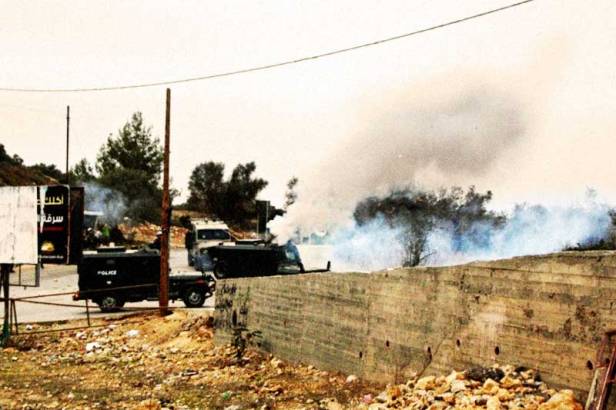 The demonstration continued as the army covered the civilian areas of the village with tear gas and at times fired rubber bullets in multiple directions. On four occasions in the centre of the village, the army used a jeep-mounted device that fires multiple rounds of tear gas, approximately 30-40 rounds. As the sun began to set, soldiers started more aggressive measures by invading civilian houses. From the houses, rubber bullets and tear gas were shot at demonstrators.

The demonstrator who was directly hit in the head by a tear gas canister escaped with just a surface wound. However, had the projectile hit him three centimeters lower on his skull the results could have been instant death or paralysis. The reckless and negligent use of arms by the army is on full display in this example. Since the demonstrator was hit in the back of the head, it is clear that he posed no significant threat to the soldiers. Rather, the soldiers were breaking army rules of conduct and recklessly targeting protesters with, what are essentially, large bullets in the form of tear gas canisters.

The latest injury in Nabi Saleh is in line with the army’s continued attack on the village. Over the past weeks, the army has increased its use of violent crowd control measures which have included the use of undercover special forces, rubber coatedsteel bullets, live bullets and high velocity tear gas canisters in an effort to crush the demonstration which will celebrate one year next week.