The Palestinian health system is fragmented into three segregated territories — East Jerusalem, Gaza and the West Bank — and Israel controls access to and from each of them. 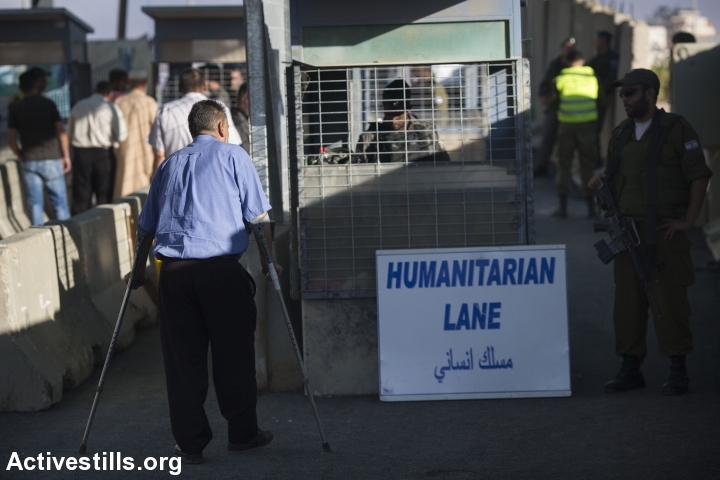 While discussions over health in Israel often focus on the healthcare provided to Israeli citizens, Palestinians in the occupied territories struggle to secure even the most basic components of their right to health. On World Health Day, it is important to remember that the obstacles to healthcare faced by Palestinians are a more silent side of the occupation, less visible than the construction of settlements or the razing of homes, but with a deep, lasting impact for those touched by the machinery of the occupation.

The Palestinian health system is fragmented into three segregated territories — East Jerusalem, Gaza and the West Bank — and Israel controls access to and from each of them. This system requires Palestinian patients to obtain a permit whenever they need to travel for medical treatment outside of their local area.

Such travel is particularly crucial for Palestinians in Gaza and the West Bank. Certain medical equipment, physician specializations and treatments are only available in hospitals in East Jerusalem. In Gaza the situation is largely a result of the blockade and Israel’s restrictions on the import of dual use items, which prohibit certain medical materials from entering the Strip. In the West Bank, one of the major factors is Israel’s historical lack of investment in medical infrastructure.

It has been increasingly difficult for Palestinian patients in Gaza to secure exit permits in order to access treatment in recent years. The World Health Organization (WHO) reported a drop in the rate of approved applications from 92.5 percent in 2012 to 77.5 percent in 2015. According to the WHO’s latest report in January 2017, more than half of applicants were denied permits or had their permits delayed.

This reality takes what should be ordinary stories of medical access and turns them into absurd tragedies with painful consequences for the Palestinian patients. Here are three of those stories from the Gaza Strip:

Asraa is two and a half years old. At age one, Asraa developed a high fever that didn’t subside, and was taken to the European Hospital in Gaza. A large, pus-filled wound was discovered on her leg, which prevented her from moving around, and doctors decided to conduct a surgery that required full anesthesia. A short while later, the wound became infected once again; her leg swelled and she developed the same high fever. Asraa had to undergo the same routine: surgery, anesthesia, discharge, home. This happened another 10 times. “Asraa is no longer quiet,” says her mother. “She is always crying and nervous and crying, she does not sleep at night, and I’m sure it’s the anesthetic she gets when she undergoes surgery each time.”

Doctors recommended transferring Asraa to Al-Makassed Hospital in East Jerusalem for a better diagnosis and treatment. An appointment was booked for January 2 and her parents submitted a permit request to exit Gaza. The Israeli army sent a reply simply stating that the request was “under consideration.”

Asraa missed her appointment and remains in Gaza. She still suffers from the same condition and has now undergone another three operations, once again under full anesthesia.

Hazar, 35, was diagnosed with thyroid cancer, which requires treatment that is unavailable in the Strip. She initially received treatment in Egypt, but when crossing through Rafah became impossible, she was referred to Al-Ahli hospital in Hebron in 2014. Her permit request was initially refused by the Israeli authorities, but she was later brought for an interrogation, after which her request was approved.

Al-Ahli hospital referred Hazar to Ichilov Hospital in Tel Aviv, saying they didn’t have the necessary means to treat her and that there was a risk that the disease had spread. Hazar then applied for an exit permit to receive treatment in Ichilov, but was denied. She applied three more times, and was refused each time.

The permit regime also impacts patients indirectly by placing travel restrictions on doctors and other medical service providers. Dr. Suheil Aeish has worked at Al-Makassed Hospital in East Jerusalem since 1997, and today heads the Molecular Clinic which provides genetic testing for patients, including pregnant women. However, in August 2016, Professor Aeish was denied an exit permit and has since been unable to leave Gaza to attend to his patients.

As a department head, there is no one in place who can replace him at Al-Makassed. Less urgent cases are being delayed. Dr. Aeish is trying to help some of his patients via Skype but regular technical problems are compounded by Gaza’s electricity shortages, and Dr. Aeish can only see test results and communicate verbally intermittently, as opposed to accompanying patients through the entire medical process. According to Dr. Aeish, several babies were born with birth defects due to his inability to fully attend to his patients.

Dana Moss is the international advocacy coordinator at Physicians for Human Rights-Israel, which works to guarantee the right to health of all those under Israel’s control.