One group of Israelis is working tirelessly to ensure that every citizen of Israel feels like they belong, regardless of religion or ethnicity. 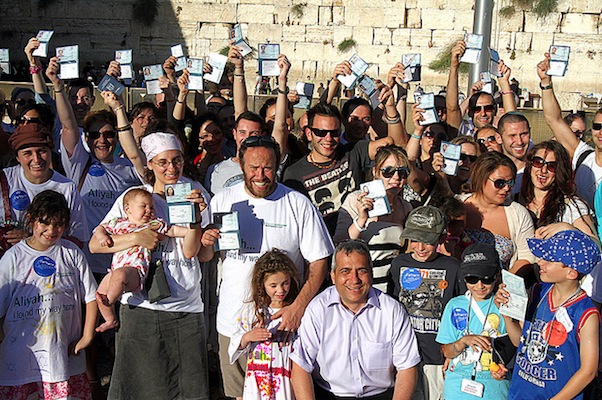 There is a discriminatory regime in Israel, a regime under which citizens are granted and denied rights on the basis of whether they are Jews or non-Jews. Separate laws were made to determine citizens’ personal status or issues such as the state’s official days of rest. Even if an Israeli citizen does not believe the government should be able to decide whether they “belong” (or if they “belong”) to any given religious group, everyone is still required to turn to “their” religion’s institutions in order to get married or divorced. And it doesn’t stop there. If you belong to the Jewish group, for instance, rabbis, who live off public funds, tell you what to eat, shut down your public transportation on Saturdays and forbid or allow you to get married.

In order to change the status quo, the “Ani Israeli” (I am Israeli) group was formed, and subsequently filed a lawsuit which said the following: we are Israeli citizens, and we do not want to be formally affiliated with any religious or ethno-religious group. Every country has a state nationality named after the state’s name. Even our passports explicitly state that our nationality is Israeli. We are suing the Interior Ministry so that it registers us as members of the Israeli nation — not only for the purpose of international travel, but for every official domestic interaction with the state.

Our lawsuit made it all the way to the Supreme Court. The court, however, ruled against the 21 petitioners, and refused to issue a declaratory judgment defining them as members of the Israeli nation. The court explained its decision by stating that a similar lawsuit was rejected 40 years ago. In the previous case, the court ruled that the Jewish people must not be split into two nations, a “Jewish” nation, as Jews are customary known, and another “Israeli” nation. According to the verdict, the founders of the State of Israel never intended for Israelis to be a nation in their own right. Additionally, the court noted that the petitioner was only one individual who himself couldn’t prove the existence of an Israeli nation.

The new verdict did not surprise us at “Ani Israeli.” In defining “Jewish,” Israel’s legislators ignored the Declaration of Independence’s commitment to the principle of no discrimination based on differences of race, religion or sex. But the law defines who is “Jewish” according to biological origin or religion, thus creating racial and religious differentiations between Jews and all other Israeli citizens.

We intend to request another hearing with a broad panel of judges.

The petitioners behind our current lawsuit are not only citizens registered as Jews, which in and of itself undermines the court’s reasoning that this suit should be rejected along the same lines as its predecessor. Rejecting such a lawsuit filed by non-Jewish citizens blocks the path for those citizens to “belong” to the state nationality, something that can be achieved in every other country. It is as if the verdict tells them: you will forever be strangers here, only Jews “belong” to this country.

The Supreme Court mistakenly interpreted the word “nation” according to an old meaning that is no longer used by any Western, democratic state. The idea of a “nation” used to mean a society made up of one ethnic group. But many new states were created in modern times alongside the creation of countless new nations that were not solely composed of people one ethnic origin or religion. Following the establishment of the United Nations, the principle meaning of “nation” came to include all of a state’s citizens, regardless of ethnic origin or religion.

The existence of an Israeli nation does not require proof, since sovereignty is derived from the “people” and the “people” are clearly defined: only those who are allowed to participate in state elections. Therefore, only citizens who actually live in Israel can be its sovereigns, rather than all Jews across the world, who are all loyal citizens of their own countries.

Can a ‘Jewish national’ be an American national?

That, however, leads to a grave conclusion: if there exists a “Jewish nation,” to whom the State of Israel belongs, and that nation is made up of all Jews across the world, then all those Jews are in danger! Jews across the world are loyal citizens of their home countries, belonging to various nations. Therefore, according to the verdict, an American Jew, who is already part of the “Jewish nation,” cannot also be a loyal member of the American nation. Not only does the “Jewish nation” verdict disregard Israelis, it is also a dangerous verdict for the diaspora.

A failure to ensure equality for minorities

The State of Israel makes every possible effort to ensure that its citizens of Arab heritage never feel like they “belong.” It takes every opportunity to reemphasize that a non-Jewish citizen is not a part of the collective that lives in this country.

It’s very unfortunate that the Supreme Court gave its approval to this intolerable situation. In an ideal world, a democratic regime would solve the questions surrounding the status of ethnic-minority citizens in a reasonable and respectable way. A state nationality that includes all citizens can accommodate various ethnic or and religious communities existing freely and respectfully next to each other, while at the same time preserving the culture or even language unique and important to each one of them. The modern state nationality is like a super structure, similar to a blanket spread over all citizens and their communities. State nationality does not discriminate between citizens, whether they are members of different groups or are solely affiliated with the state nationality. In this way, for example, members of the Swiss nation are divided into separate groups with various languages. Or take the British nation, which includes the people of England, Scotland and Wales, each of them maintaining and respecting the tradition and culture unique to them. New British citizens are considered members of the British nation, no different from any citizen of English, Scottish or Welsh origin.

Israel is no different. In Israel there is only one state nationality, Israeli, which includes those communities that are not granted the status of nation. There are certain responsibilities carried by the state that cannot be carried on the shoulders of communities, such as: military service for all, legislation on a national level, and representation of the country abroad and in the UN. Even in Belgium, the different groups – Flemish, Walloons and Germans – are referred to as communities rather than nations. The Belgian state nationality is both transcends and is shared by these three communities.

The effort to sustain a state nationality that includes different communities requires tolerance, understanding of the other, and a willingness to make concessions. A community must not believe that it is the sole owner of the land. Our Declaration of Independence promised that we would not allow discrimination based on race, religion and sex. But among the majority Jewish community, certain groups have sprouted up which claim that Israel belongs solely to the Jews, with a similar mood existing to a certain extent among Islamic extremists. Within the Jewish community there is no equality between men and women, with the Jewish majority using its power to force through discriminatory policies into Israeli legislative system. Any community, and specifically this community, cannot lead a democratic state as if it were a nation. Only a state nationality that includes all communities can lead a democratic state that does not discriminate between its citizens – only this kind of country can attain and sustain real peace.

Whether our petition for another hearing is rejected or not, we will not cease to present ourselves as members of the Israeli nation, which is known across the world. We will continue until the recognition of the Israeli nation will be officially accepted, not only on Israeli passports, but also within Israel itself, putting an end to the ruling establishment’s official ethno-religious division between citizens.

Uzzi Ornan is an Israeli linguist at the Hebrew University and Technion and a member of the Academy for the Hebrew Language. He is a social activist who in 1998 founded the “Ani Israeli (I Am Israeli) group, which strives for equality among all Israelis by dropping the ethnic/religious nationality from the formal government citizen registries, replacing it by the “Israeli Nationality”, or revising it to include “Israeli” as an option.