A new Israeli labor regulation continues a trend of increasingly suspending rule of law for Palestinians in the West Bank, in this case leading to further segregation in access the courts. 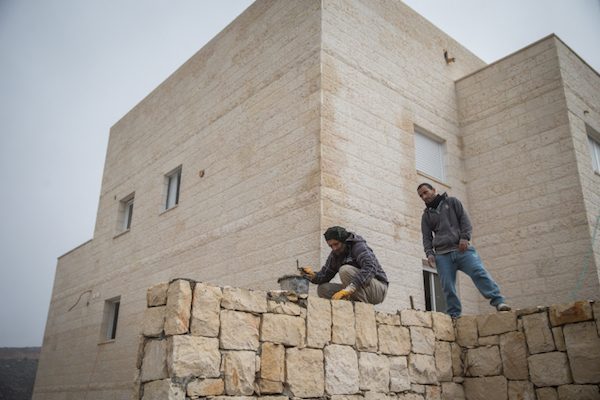 In the Israeli economy, dirty, difficult, and dangerous jobs often are left to some 170,000 foreign workers, among them 55,000 Palestinian workers from the West Bank. Numerous NGO reports and media exposes have documented the abuses faced by these workers. Yet the most vulnerable and exploited segment of Israel’s labor force now faces yet another barrier to justice: in August, Justice Minister Ayelet Shaked issued a new regulation requiring most foreign workers to deposit a financial guarantee as a condition to proceed with lawsuits against their employers in the country’s labor courts. As a result, whatever rights these workers should enjoy by law will likely be too expensive to actually enforce.

Shaked and her Jewish Home party have made plain the political agenda behind the rule: to thwart an imagined “lawsuit intifada” of legal claims by Palestinians working in the Jordan Valley settlements against their Israeli employers. Adalah, the Workers’ Hotline, and the Association for Civil Rights in Israel jointly filed a petition to Israel’s Supreme Court challenging this regulation, which blatantly discriminates on the basis of national origin. Under this regulation, Israeli and foreign workers would be subjected to different standards for pursuing their rights, even when performing the same tasks for the same employers side-by-side.

Moreover, Shaked adopted the regulation in a breathtakingly arbitrary fashion, without any public consultation or debate. It comes as little surprise then that the regulation also violates the separation of powers. Israeli law permits the government to set some procedural rules for the country’s labor courts but the Jordan Valley regulation so dramatically tilts the scales of justice in favor of employers that it changes the substantive rights involved. Moreover, the regulation disregards numerous court precedents stressing that the requirement of a financial guarantee should only be used in exceptional circumstances when judges determine that plaintiffs would refuse to pay legal fees if they lose or are engaging in frivolous lawsuits. This regulation usurps the legislature’s role and unreasonably eliminates judicial discretion only in order to obstruct access to court for foreign workers, especially Palestinians.

The new labor regulation is part of a disturbing trend in recent years to increasingly suspend the rule of law with regard to Palestinians in the West Bank, leading to increased segregation in access the courts for the enforcement of their rights.

These limitations started in the area of tort law. In 2005, the Knesset enacted a law essentially banning Palestinians from filing tort claims for damages by the Israeli army in the 1967 territories. Following a challenge to this law by Adalah and other human rights organizations, the Supreme Court declared the law to be unconstitutional. In response, the Knesset took a slightly more subtle route by broadening the definition of “acts of war” (which are immune from compensation claims) to include nearly any action by the army in the territories. This trend continues with the policy of refusing to grant Palestinians from Gaza permits to enter Israel and appear in court, which was also upheld in 2014 following a petition by Adalah.

Moreover, as with the new Shaked regulation, courts have routinely required financial guarantees as a condition for hearing lawsuits. Before “Operation Cast Lead,” the 2008-2009 attack on Gaza, such guarantees averaged about NIS 30,000 ($8,750) — beyond the means of most Palestinian victims. Since then, things have only gotten worse. Israeli authorities have required that financial guarantees be paid on a per plaintiff basis, with the perverse effect of making mass-casualty attacks even more expensive to pursue. Faced with a lawsuit from the al-Samuni family — which lost 21 members in an Israeli airstrike in Gaza City — an Israeli court demanded a guarantee of NIS 1,000,000 (more than $290,000).

Access to justice is crucial for more than ensuring respect for human rights or international humanitarian law. It is also crucial to human dignity: the ability to have one’s claims heard in court and to tell one’s story is just as important, even (and especially) when courts cannot be counted on to give just verdicts. By obstructing access to labor courts, Israel is working to further marginalize Palestinian and foreign workers by depriving them of one important venue to make their voices heard.

The author is a senior attorney and Director of the Social and Economics Rights Unit at Adalah – The Legal Center for Arab Minority Rights in Israel. This article was originally published on The Nakba Files, part of The Nakba & the Law, a joint project of the Columbia University Center for Palestine Studies and Adalah.