Not only do the EU guidelines do very little to affect the occupation economy, they may also bestow legitimization on commercial activities that, despite supposedly taking place within the Green Line, yield huge occupation-born profits. 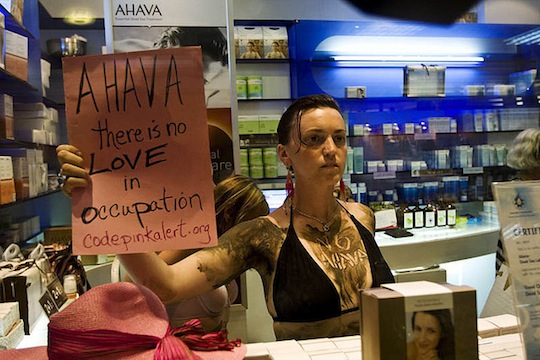 Protest against Ahava, an Israeli company which has its manufacturing plant in a West Bank settlement. (photo: Keren Manor/Coalition of Women for Peace)

Contrary to confused press reports, the new European Union guidelines do not entail a boycott of the settlements but in fact reflect a misguided notion of two independent economic systems divided by the 1967 borders. Nevertheless – a precedent was set.

According to the new guidelines issued by the EU last month, the various EU bodies can no longer fund or dispense awards and grants to commercial companies, public bodies and organizations working within settlements. But what do these guidelines entail in practice?

The new guidelines sent shockwaves across the Israeli and global press alike. It was suggested by many reports that EU bodies shall cease to fund public and commercial organizations and bodies directly involved in settlements across the Palestinian and Syrian occupied territories – beyond the 1967 lines. In fact, these are not binding directives, but rather mere guidelines, constituting a recommendation. Their binding powers only apply to bodies operating directly on behalf of the EU, not each individually EU member state. Nevertheless, according to the recommendations, academic and governmental institutes, as well as many Israeli and international companies, may cease to enjoy grants from the EU as long as they maintain their activities in the occupied territories.

One body set to be directly and clearly hit by these recommendations is the cosmetics company Ahava. The company, with its factory located in part of the Dead Sea located in the occupied territories, manufacturing products made of mud mined from it, participates in several research projects funded by the EU each year. In this case, as in many others, despite the company’s official address being registered in Ben Gurion Airport City, its sole production site is located at the settlement of Mitzpe Shalem (as evident by the enormous visitor center the company built next to its factory). And yet, the EU’s new recommendations leave bureaucratic loopholes that may allow Israeli bodies and companies such as Ahava to easily avoid the implications. A company, for instance, can cite an address within the 1967 borders and still keep a production plant beyond the Green Line. The only thing that could expose companies for what they are is the EU demand that they officially declare zero activities in the occupied territories; yet even this declaration only pertains to activities that are part of the specific research awarded in the grant. Whichever way, ambiguity is a well-known tactic used by companies to disguise their activities in general, specifically in the occupied territories.

The EU guidelines offer a very narrow definition for beyond-the-Green-Line activities. They do not address services provided to settlements or even funding, but strictly activities within the occupied territories – also defined by unclear criteria and perceived through an analysis of the Israeli economy that hardly represents reality on the ground.

The lion’s share of the Israeli economy is involved one way or another with commercial activities in the occupied territories. Take the banks, for example. Israeli banks finance construction and infrastructure projects beyond the Green Line, granting mortgage loans for settlements and other loans to municipalities in the West Bank. Most banks keep branches in the settlements. Even if a day comes when banks close their settlement branches, wouldn’t they still be directly involved in the occupied territories? Don’t funding and financial consulting constitute support of the illegal occupation of the West Bank?

The EU’s vague definitions leave a lot of room for interpretation and raise question on their future implementation. How is the Green Line to be redrawn? What kind of dealings will the EU define as activities in the settlements? Long-term contracts? A certain percentage of ownership? And what should they make of parent companies and subsidiary companies? Cellular phone company Cellcom, for example, has placed hundreds of antennae and cellular infrastructure facilities across the West Bank and even operates branches in Ariel, Modi’in Illit, Beitar Illit and East Jerusalem neighborhoods. Is IDB, with its holdings in Cellcom Israel (via Discount Investment Corporation), going to be perceived as directly involved in the occupied territories by virtue of its subsidiary company’s activities?

Contrary to the media, the recommendations do not mean a boycott of the settlements. In practice, these recommendations mean that all bodies operating within Israel and outside the 1967 borders must draw a distinction between the settlements and Israel. Yet this distinction is ill-suited to the economic system that has developed in Israel-Palestine. Therefore, not only does it do little to affect the occupation economy, it may also bestow legitimization on commercial activities that, despite supposedly taking place within the Green Line, yield huge occupation-born profits. The logic behind the EU recommendations reflects a perception of two independent economic systems, which doesn’t hold water.

It seems the EU has been consolidating its policy on the occupation economy, and its current guidelines are a part of it. A directive on labeling settlement products is set to follow. Apart from the widely-echoed symbolic significance entailed thereof, it seems that enforcing these recommendations may require many administrative resources. The EU does not specify the sanctions to be imposed on companies that issue false declarations regarding their activity in the occupied territories, and there is no guarantee there will actually be any. Settlement-based companies have already proven their ability to evade regulation, as in the case of the EU-Israel trade agreements on tariffs; the Israeli government compensates settlements for their exclusion from the EU-Israel trade agreements, footing the bill itself when such companies are required to pay tariffs. In this case, again, the Israeli government will most likely find a way to take the edge of the EU recommendations or downright neutralize them through diplomatic means.

Nevertheless, these precedent-setting EU recommendations are tantamount to taking a stance against the legitimacy of Israeli settlements beyond the 1967 borders. The fact that these recommendations stemmed from ongoing, intensive pressure by activists and political movements serves to show that the struggle against the occupation can indeed produce change even on the international level. At the moment, the effect of these recommendations is mostly limited to public opinion. But if the EU pursues this path, clarifying criteria for involvement in the occupation and strictly enforcing recommendations – there is a real chance that for the first time, Israeli companies shall be forced to consider the cost-effectiveness of maintaining their operations in the occupied territories.

The authors are members of the Who Profits occupation research project.