The night the left took back the streets: Over 500 anti-war protesters brushed off arrests and police violence Saturday night to demonstrate against the assault on Gaza.

Saturday night’s demonstration in Tel Aviv was by far the most successful one held against the current assault on Gaza. With all due respect to those who were arrested last night, neither their arrests nor the police’s brutality are the main story. Because for the first time since the beginning of Operation Protective Edge, and after weeks of hiding behind police fences and fleeing hysterically from violent right-wing activists, the Israeli left finally took to the streets. 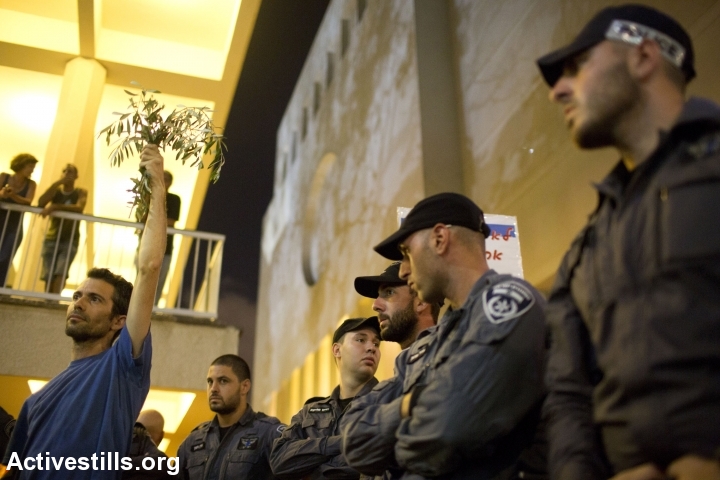 The police originally tried to prevent the demonstration from taking place by taking the organizers outside of Habima Square, where the protest was meant to be held, and detaining them on the other side of the road.  This left the gathering crowd in limbo, which lasted until the police officially declared the event an illegal gathering. But what had started as a messy attempt to resist the riot police, who formed a line and tried to push the demonstrators out of the square, turned into the liveliest protest we have seen thus far. There were arrests, and yes, they were violent. But there was also non-violent resistance by the protesters, which turned into a march down Dizengoff Street in the heart of Tel Aviv. 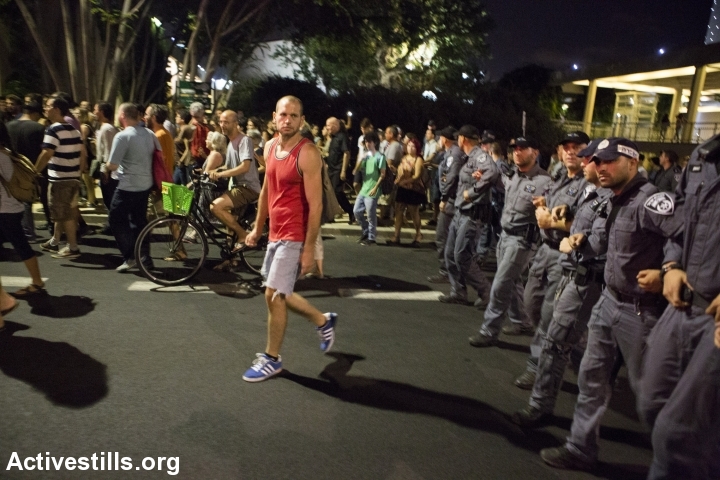 Rather than only expressing anger and fury over the deaths in Gaza, the marchers yelled slogans that tried to communicate directly with the Israeli public. Slogans such as “From both sides of the wall, we’ve had enough of this war”; “The people demand a ceasefire”; and the always relevant “In Gaza and Sderot, little girls just want to live.” Although some of the onlookers hurled insults, aside from the arrests there was no violence against the demonstrators. There were, on the other hand, a few people who spontaneously joined us as we marched. 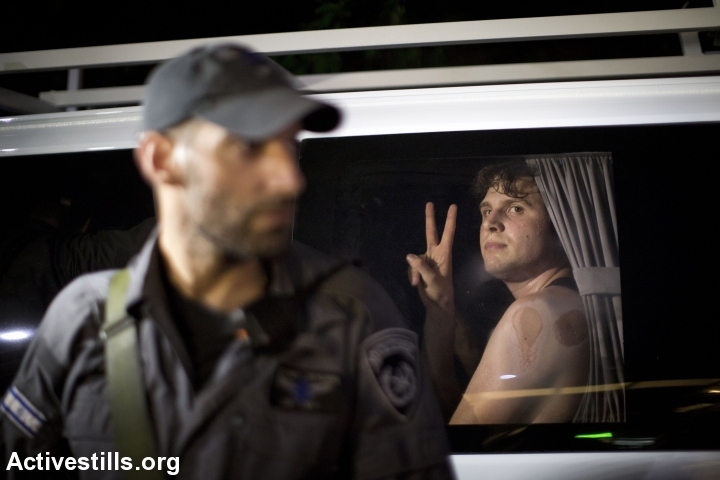 An anti-war demonstrator looks on after being arrested by police during a demonstration in Tel Aviv. (photo: Keren Manor/Activestills.org)

When we only pay attention to last night’s arrests, we succumb to a narrative of conflict and violence, thus missing a major component of what actually happened. We turn it into just another story of conflict between anti-war demonstrators and policemen, forgetting that this is a protest against the war. Those 500 people who marched through Tel Aviv last night had more energy than the 5,000 who stood in Rabin Square last week, not to mention much better interactions with their surroundings. And for the first time in three weeks, the people around me ended their Saturday nights with a bit of positivity.

Leehee Rothschild has been active in the Palestinian struggle for over a decade. She currently works with Anarchists Against the Wall and Boycott From Within. She writes about activism and political struggle on her blog, Radically Blonde, and other publications.

Related:
The night it became dangerous to demonstrate in Tel Aviv
Beyond protest: War and the Israeli Left
‘Unprecedented’ violence stalks anti-war demos across Israel