Although the tent protests of 2011 succeeded in changing the public discourse about housing, the country’s policies regarding availability, affordability, and recognition of Bedouin villages in the Negev have not changed. 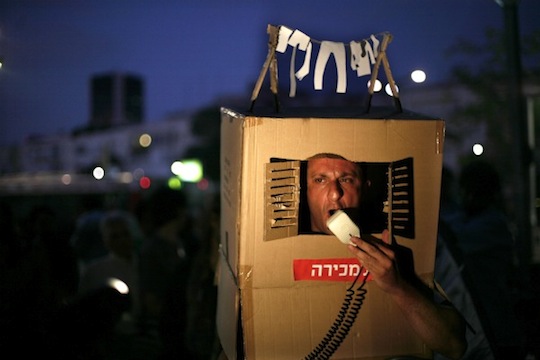 Last month, the Association for Civil Rights in Israel (ACRI) published its annual report on the state of human rights in Israel and the Occupied Territories. The document reviews the events of the past year by focusing on the how the government’s policies have affected peoples’ civil, political, and economic rights.

The summer of 2011 will be remembered in Israel for the massive social protests that swept the country as tens of thousands of citizens moved into improvised tent cities and participated in demonstrations. The spark that lit the fire underneath these protests was the difficulty that so many Israelis face as they try to keep a roof over their heads. The government promised to respond boldly and address the issue of housing. Accordingly, ACRI’s 2012 report focuses on the right to housing, and reveals that the substantial changes sought by the public and promised by the government are still lacking.

Even under its narrowest definition, the right to housing includes a safety net for the most vulnerable members of the population in the form of public housing. In Israel, however, public housing is scant due to two decades of policy in which no new public housing units were added. Despite being supported by the Minister of Housing and 32 members of Knesset from across the political spectrum, proposed legislation seeking to allocate 5% of all new projects built on state lands to public housing was not supported by the government. Instead the government prefers to rely on rental allowances, a nearly unmanageable policy that puts the economically vulnerable at the mercy of the private market, while failing to ensure that the payments keep pace with real housing costs.

Severe poverty and homelessness are not the only threats that undermine the right to housing. Beyond the fact of a roof over one’s head, a family’s home must be physically safe, afford privacy, and be in an adequate condition befitting modern society. Adequate housing must take into account a human being’s other basic needs, and be affordable enough to ensure these needs are not compromised. No one should be forced to deny their children dental care just to be able to pay the rent.

In this regard, the report shows that very little has been done to address the issue of affordability. In the face of increasing prices for housing, the government failed to heed one of the protesters’ central requests – a requirement that all new building plans include a fair proportion of affordable housing. Additionally, despite the passage of a law authorizing special national housing committees to allocate state lands to affordable housing in designated plans, in the year and a half since the law’s passage, not a single plan for affordable housing has been advanced by the committees.

For housing to be adequate it must also incorporate legal security of possession and occupancy, be connected to adequate infrastructure, and be accessible to health-care services, schools and employment. In this regard, the report illustrates the fact that many Bedouin Arabs still suffer from acute distress due to the government’s refusal to officially recognize 35 historical villages in the Negev. Approximately 70,000 people – 65% of them children – live in unrecognized villages, many of them without basic services such as paved roads, running water or electricity, let alone schools or health clinics. These citizens are not only at constant risk of having their homes destroyed for lack of building permits, they are at the mercy of proposed legislation to implement the Prawer Plan, which would uproot about 40,000 people from their homes. Instead of recognizing the 35 villages by the same standards applied to the 112 Jewish villages in the Negev (kibbutzim and moshavim), the Prawer Plan seeks to forcibly move their residents to culturally inadequate towns among the poorest in the country.

The right to adequate housing is a key issue on the public agenda. Although the tent protests of 2011 succeeded in changing the public discourse about housing, the country’s laws and policies have not changed. The struggle to defend peoples’ right to housing – along with their other human rights – will continue after the coming national election. We hope to report positive developments in ACRI’s 2013 annual report.

Attorney Gil Gan Mor is the Director of the Right to Housing Program at the Association for Civil Rights in Israel (ACRI).