The European Union is substituting pressure on Israel for dialogue. How else will it be able to continue building schools and solar panels in the occupied territories? 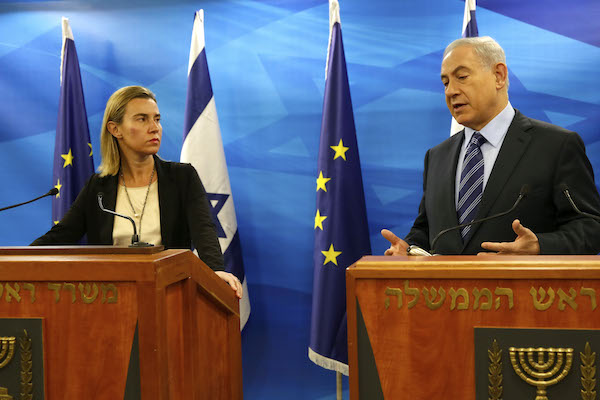 The European Union is one of the most demonized bodies in Israel at the moment, and the hate is no longer coming only from the extreme right. The working assumption in the Israeli mainstream is that the EU is biased against Israel, that it supports different forms of sanctions and boycotts, and that it is trying to isolate Israel and force it to withdraw from the occupied territories.

The truth is entirely different. While the EU might support the two-state solution, and the leaders of its member states are far more committed to two states than the Obama administration, it is also one of the main bodies helping Israel maintain the status quo in the West Bank and Gaza.

The goal of Israel’s policy is maintaining the current reality in the occupied territories, in which Israel effectively rules the West Bank, continues to support settlement growth, enjoys quiet due to security cooperation with the Palestinian Authority and the IDF is able to act freely. All this is done without having to bear the real cost of the occupation, especially since foreign bodies fund the Palestinian Authority, train its police officers, prevent chaos in the refugee camps and maintain civil infrastructure.

The EU is one of the sustainers of the status quo. In fact, it has built the PA twice — once after Oslo, and once again after Israel destroyed the civil infrastructure in the occupied territories during the Second Intifada. Since then, Israel has taken on less and less responsibility for the civilian population under its rule (except for in Area C of the West Bank, where creeping annexation has become the norm). The vacuum is filled by aid organizations and NGOs — UN development agencies, EU and USAID projects, etc. Their effect goes beyond the financial cost of maintaining the occupation and bleeds into every aspect of Israel’s responsibility for the millions of Palestinians civilians under its authority.

Israel is willing to let all these organizations work freely, as long as they differentiate between humanitarian/civilian activities and the political aspects of their work. If they stray from their mandate, the state will fiercely attack them, marking members of the organizations as “personas non grata” and make it difficult for them to function.

The various NGOs and aid agencies place many restrictions on the Palestinians they work with — they cannot belong to certain political parties, have no convictions and so on. The result is a “sterile environment” that does not threaten the occupation. The traditional structure of Palestinian society in the West Bank (which led the popular revolt of the First Intifada) is slowly being replaced — in certain places, at least — by a society that relies heavily on NGOs, which serves the interest of the military regime.

In this way, the EU and the United Nations maintain the reality on the ground, and in doing so subvert their stated goal: the establishment of a Palestinian state. Many people in Brussels actually understand this. I once heard Christian Berger, the head of the EU’s Office in the West Bank and the Gaza Strip (and one of the major forces behind the EU’s foreign policy vis-a-vis Israel and the Palestinians), complain about Europe’s role in bankrolling the status quo in the occupied territories. But the mechanism of the European consensus, alongside a deep, fundamental unwillingness to get into a confrontation with Israel (and sometimes with the U.S.) helps maintain this reality.

The new Israeli-European dialogue forum, which Barak Ravid reported earlier this past week in Haaretz — is a perfect example of this dynamic. On the face of it, Europe’s original intent behind the dialogue is understandable. Like the United States, no one in Europe believes that an agreement over a Palestinian state will come soon, so the goal of the current policy is the maintain the current reality while preventing the erasure of the Green Line or the deepening of the settlement enterprise. This was the impetus for low-level dialogue with Israel. But the Israeli government, according to Ravid, is only willing to speak about the EU’s civil projects, rather than political issues such as settlement construction or land expropriation.

From now on dialogue will serve as a replacement for pressure on Israel on the one hand, and as an act of bargaining that will serve Israel’s political interests on the other. Israel may enjoy the fruits of those EU projects in the West Bank, but it will use them as a bargaining chip against steps that are diametrically opposed to the interests of the occupation. The EU wants to build a school or a site for solar panels? To gain approval from the authorities, the EU will have to stand alongside Israel on issues that are important to the latter, such as UN reports or the ICC. Put simply: the right to fund the occupation in exchange for an agreement that the EU will not act against it. 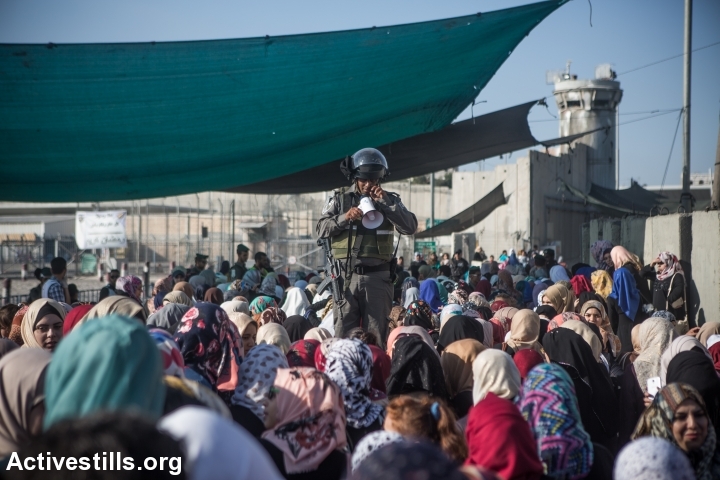 Palestinians cross the Qalandiya checkpoint between the West Bank city of Ramallah and Jerusalem on their way to pray at the Al-Aqsa Mosque in Jerusalem, on the third Friday of the Muslim holy month of Ramadan, July 3, 2015. (photo: Yotam Ronen/Activestills.org)

This can go on for many more years. Every new generation of European politicians will convince itself that economic investment in the occupied territories is part of a the “state-building” project or that it constitutes “support for Palestinian civil society,” and therefore is a legitimate substitute for investing their political capital in trying to end the occupation. The lessons of the last 20 years, which teach us that there is no way to build a state under military occupation, will always play second fiddle to the political needs of the European leadership.

Ironically, it is the paranoia of the Israeli Right, which seeks to do away with Europe’s foothold in Israel and the occupied territories, that is impeding the current arrangements. If the Right succeeds in forcing the Europeans to lose their projects and cease funding the Palestinian Authority, the EU’s dependence on the good will of the Israeli government will lessen significantly. This would only increase the likelihood of a confrontation. I suspect Netanyahu understands this fact, and thus lets his right-wing ministers speak out against Europe, while on the other hand deepening the cooperation and dialogue with the European Union.

This is one of the reasons why, as opposed to predictions of the Israeli press, I do not believe the world is going to force us to end the occupation in the near future (no one can be sure what will happen in the longer run). Netanyahu was able to reformulate relations with the West according an arrangement based on cooperation that is essentially effective for Israel. The political price he pays is tolerable, especially when compared to the price of ending the occupation. Bibi is being aided by the regional tumult, which has strengthened the desire for stability on the part of local and international actors. Even Hamas and Fatah are in the business of maintaining the status quo. Today it is more difficult than ever to imagine a path for ending the occupation.