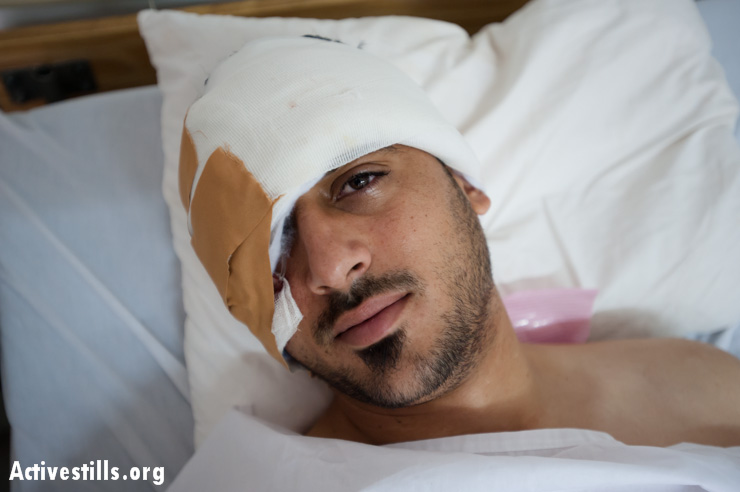 Mohammad Al-Azza rests in the hospital the morning after being shot in the face with a rubber-coated steel bullet by Israeli forces in Aida Refguee Camp. Beit Jala, West Bank, April 9, 2013. Al-Azza underwent several surgeries to remove the bullet and reconstruct his shattered cheekbone. (Photo by: Ryan Rodrick Beiler/Activestills.org)

Palestinian photographer Mohammad Al-Azza was arrested earlier this week. He had spent months evading the same Israeli forces that had shot him in the face with a rubber-coated steel bullet last April while he was covering an incursion into Aida Refugee Camp, where he lives. Journalist Amahl Bishara provides this detailed account of the ordeal Al-Azza and his family faced the night soldiers broke into their home:

On it went, for over an hour, until the soldiers decided to search one room for a third time. Nisreen was stunned to see soldiers throw up the bed and find Mohammad al-Azza. Immediately, they began kicking him and beating him with their fists and rifles. She saw him trying to shield his healing face, and then the soldiers slammed the door, as the pounding continued.

When they carried him out of the room, the soldiers surrounded him so tightly that no one could exchange a word with him. He caught his uncle Nidal’s eye for a moment, and then they took him off, barefoot, wearing shorts and a sleeveless undershirt.

They dragged him up to the street. He must have heard more screams and shouts from the neighborhood through the blows of the boots and fists. His sister Rasha came downstairs from her apartment across the street, and she could not quite identify him, or perhaps did not want to. She called out: “Who is there?” A soldier showed a bright light in her face, and another slammed his rifle butt hard into Muhammad’s back, forcing him to cry out. And so she knew. On the street, Mohammad’s aunt managed to tell a soldier who spoke Arabic that he had just had surgery on his face, please not to hit his cheekbone. “We promise,” said the soldier, as the blows fell all over Mohammad’s body.

At the time of writing, Al-Azza is still in custody as an Israeli military court prepares to hear Shin Bet (Israel’s Security Agency) testimony against him. At an earlier hearing, according to Bishara’s account, “his lawyer read the accusation: That he had known about protests before they occurred, and thus that he was part of the protests.”

His mother despaired. “We had a hard enough time just seeing him shot, seeing his face disfigured. On top of this they terrorise our entire family, beat him and now they arrest him. Isn’t that enough?”

A spokesman for the Israeli military told Al Jazeera: “Mohammad al-Azzeh was arrested on July 1 in Al-Aida, on the suspicion of involvement in violent and illegal activities, after which he was transferred to security forces for questioning.”

The Al Jazeera report includes this background on the situation in Aida Camp:

The people of Aida refugee camp are facing a brutal crackdown by the Israeli military. The impoverished camp’s position in the shadow of the separation wall has meant it is the site of frequent clashes between stone-throwing youths and Israeli soldiers, as well as regular military raids and arrest operations.

Under the balcony where Mohammad was shot is the spot where 15-year-old Saleh Elamareen was fatally shot on January 18. Just a month later, 12-year-old Mohammad Khalid al-Kirdi was one of two boys shot and injured during a protest in Aida.

Later in February, Mohammad’s younger brother, Saed, a student in his final year of chef studies, was taken into custody by Israeli troops. In March, 16 people between the ages of 15- 29 were arrested in early morning raids.