As internationals and Jews, we are unjustly privileged — and therefore obligated to take part in nonviolent direct action in support of the Palestinian struggle for freedom. 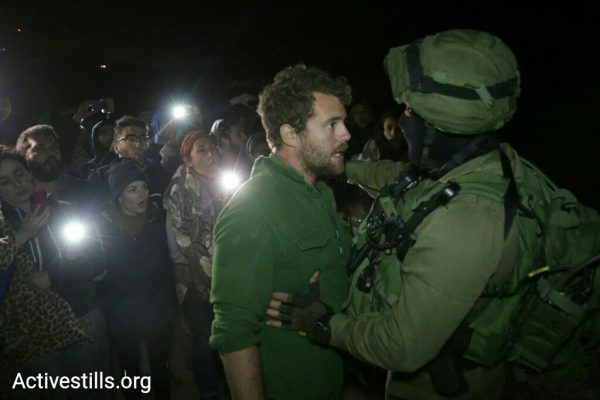 Israeli soldiers confront Jewish American activists in Sarura, a village that had been rebuilt of Palestinian, Israeli, and international activists, May 21, 2017. (Ahmad al-Bazz/Activestills.org)

My first protest in the West Bank was in 2012. On the advice of a college professor, I went to a demonstration in Susya, a Palestinian village in the South Hebron Hills. The village was then, as now, under threat of demolition.

When we arrived, along with a few other American students affiliated with J Street U, there were already around 700 Palestinians, Israelis, and internationals present. The children of the village had painted Palestinian flags on their faces and the energy was almost celebratory. But when we began to march to the site of Susya’s ancestral lands, which had been taken over by an Israeli settlement, the Israeli military came out in full force. The demonstration was dispersed with tear gas, stun grenades, and the threat of skunk water. I had never been so terrified in my life.

That terror came back this week when I returned to the South Hebron Hills with the Center for Jewish Nonviolence. Almost 200 diaspora Jews helped establish the Sumud Freedom Camp on the site of the Palestinian village Sarura. Twenty years ago, the residents of Sarura had been forced to abandon their village in the face of settler violence and the imposition of a closed military zone on their land. This past weekend, they chose to name the freedom camp “Sumud,” Arabic for steadfastness, to embody a central concept in the Palestinian lexicon of resistance.

The action was organized by an unprecedented coalition of Palestinian, joint Israeli-Palestinian, and diaspora Jewish organizations, including the South Hebron Hills Popular Committee, Youth Against Settlements, Holy Land Trust, All That’s Left, Combatants for Peace, and Center for Jewish Nonviolence. Many of the Jews who flew in from around the world had absolutely no idea what it might be like to confront settlers or the Israeli military. And yet, out of obligation, they came. 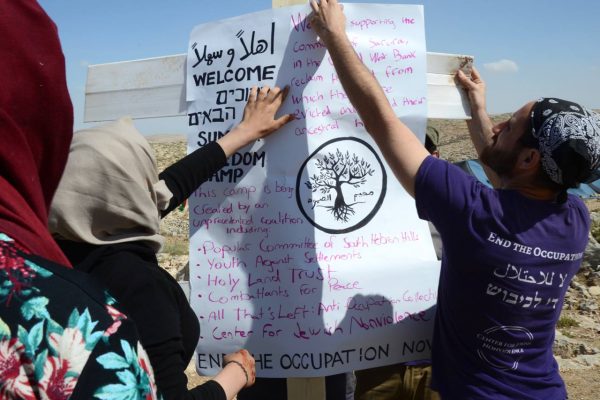 One trip participant, an American Jew from Connecticut, recalled her first time protesting the occupation in the West Bank in 1983. She was the only diaspora Jew there then. A second trip participant, an American Jew from Washington D.C. and veteran anti-occupation activist, remarked that if I had told her 10 years ago that she would be standing in the West Bank chanting “Free Palestine” with a group of over 100 American Jews, she would have laughed in my face.

Within moments of our arrival, a Palestinian farmer named Fadel Aamar returned to the home he had been forced to leave two decades before. We snapped photos as he used his original key to open the rusty door, a broad grin on his face. Unsure of when the Israeli military might come to break up the camp, we worked quickly to clear caves, establish tents, and mark the entrance to the village with painted tires. By the end of the first night, we were feeling more confident. Other than a short visit from the settlers from a nearby settlement, all was well.

The second night didn’t go quite as well. I had just put my glasses in my shoe and crawled under a blanket to fall asleep when I heard the shrill sound of whistles: the IDF had arrived to destroy our encampment. I found my way to the entrance of the camp just in time to watch as a soldier slammed one of our group leaders into a table. My heart sank and tears began to silently stream down my cheeks. An hour before, we had been finishing our Havdalah service and dancing dabke.

Our tents were destroyed, our supplies and generator stolen, and many of us were physically harmed. But four days later, Sumud Freedom Camp still stands. As I write, Palestinians, Israelis, and diaspora Jews are crawling into the rebuilt encampment to try again for another night of sleep. 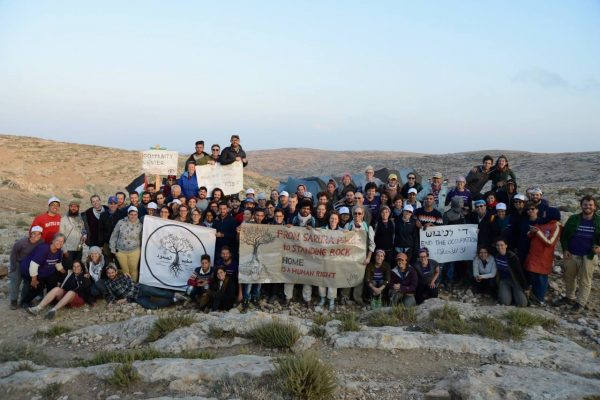 As Sumud Freedom Camp continues to grow, diaspora Jews are continuing to build a stronger infrastructure than ever before to put our bodies on the line. We are developing the trainings, resources, and community to do this sustainably, rather than quickly becoming isolated, traumatized, and burnt out.

As our organizing continues, the presence of our bodies, unjustly privileged by our identities as internationals and as Jews, will shield our Palestinian partners from the worst excesses of the occupation, as they continue to resist displacement, erasure, and violence. Make no mistake: the only reason that the Sumud Freedom Camp has lasted so long is the presence of Jews from around the world.

The more diaspora Jews take part in nonviolent direct action in support of the Palestinian struggle for freedom, the better we will be able organize our communities around the world. In the course of our work with Palestinian organizers at Sarura, we were repeatedly asked to draw attention to Palestinian nonviolent resistance in our home countries. We take that call as a sacred obligation.

As our movement grows, more diaspora Jews will begin to share personal stories of the violence Palestinians face on a daily basis under military occupation — whether in our synagogues, schools, or summer camps. Palestinian suffering has not been enough to wake our communities up; will our communities turn their backs on the suffering of their children, students, and rabbis?

We came to Sarura to place our bodies in the gears of the occupation machine. Our Palestinian partners knew that our presence would make it possible for them to reclaim their space and regain their homes. And it’s working. We are physically reversing the process of displacement, with every cleared cobweb in every abandoned cave. I’ll be headed back to Sarura this week, and I call on every Jewish community I have ever been part of to join me.

Leanne Gale is a Jewish anti-occupation activist and former NIF-Shatil Social Justice Fellow. She will be starting Yale Law School in Fall 2017.