Today he allowed himself to show off his expert knowledge of Israeli demographics and voting habits and claimed that the Russian sector was an obstacle to peace. As reported on Foreign Policy:

“An increasing number of the young people in the IDF are the children of Russians and settlers, the hardest-core people against a division of the land. This presents a staggering problem,” Clinton said. “It’s a different Israel. 16 percent of Israelis speak Russian.”

According to Clinton, the Russian immigrant population in Israel is the group least interested in striking a peace deal with the Palestinians.  “They’ve just got there, it’s their country, they’ve made a commitment to the future there,” Clinton said. “They can’t imagine any historical or other claims that would justify dividing it.”

He didn’t stop with the Russians, and continued to dissect Israeli voters by ethnic background:

Clinton then ranked the Israeli sub-national groups in order of his perception of their willingness to accept a peace deal.  The “most pro-peace Jewish Israelis” are the Sabras, who he described as native-born Israelis whose roots there date back millennia, because they have the benefit of historical context. “They can imagine sharing a future.”

Ashkenazi Jews who emigrated from Europe and have been in Israel for one or more generations are the next most supportive of a peace deal, Clinton said.

The “swing voters” are what Clinton called the “Moroccans”: North African Jews who immigrated to Israel in the 1970s. He described them as right-of-center citizens who nevertheless want normal, stable lives.

Clinton’s superficial ranking got some tough reaction in Israel, including Prime Minister Benjamin Netanyahu who said his remarks were “distressing“.

The harshest reaction came from Yisrael Beitenu, as reported by Haaretz:

The party released a statement criticizing Clinton for meddling in Israel’s internal affairs and for his “crude generalizations”.

“The people of Israel are one, and the Russian immigrants, as the other citizens of Israel, yearn for true peace based on recognition of Israel as the nation state of the Jewish people,” said the statement.

The timing of Clinton’s statement is what raised my eyebrow. This coming Sunday, the settlement freeze will come to an end, and chances are high that the Palestinians will ditch the peace negotiations as a result. Foreign Minister Avigdor Lieberman, head of Yisrael Beitenu and a settler himself, has voiced his opinion that the talks will surely fail.

This could have been yet another gaffe by Clinton, but maybe not. He might be one that’s hard to rein in, as shown time and again during his wife’s presidential campaign. One of the more well known mishaps was when he compared Barack Obama’s win in the South Carolina primaries to the wins Jesse Jackson had in the 80’s, hinting that race was an issue in the ballot. 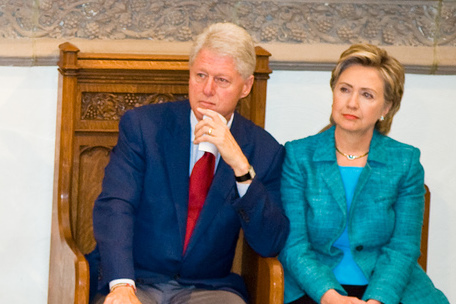 The damage Clinton did to Hillary’s campaign is well documented, and one can only think that he is now much more coordinated with her as Secretary of State. And if this is the case, could it have been a premeditated  jab at someone who they believe is an obstacle to peace, in an effort to put pressure on him to change his attitude? Or even worse, could they already have entered the “blame game” phase for the upcoming failure of peace talks?  One can only wonder, after hearing Hillary’s optimism in the past few weeks – did we just see a Clintonian “good cop, bad cop”?

If that’s the case, they obviously don’t know Lieberman that well.