Prime Minister Benjamin Netanyahu has been accused of playing the American political game. It seems that his friend Mitt Romney is now involved in Israeli politics, having cancelled a meeting with Labor head Shelly Yachimovich at the last minute. Labor Minister: ‘Romney may have been misled by political players in Israel.’ 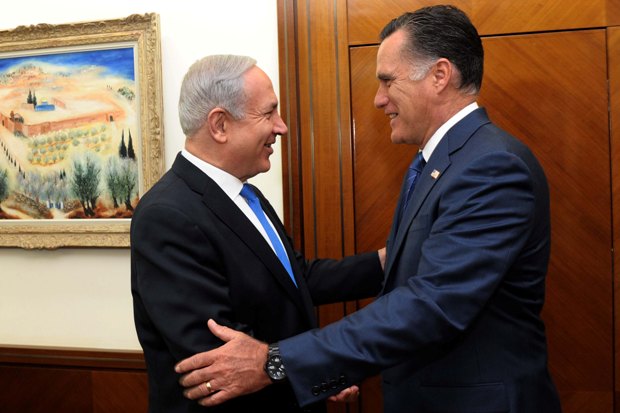 A meeting between the Republican nominee and the Labor leader, Shelly Yachimovich, was cancelled last minute by Romney’s staff, despite having initiated it and repeatedly confirmed it until today. According to Haaretz, a probable reason for the cancellation was a request from Prime Minister Netanyahu, who sees Yachimovich as his biggest political rival today.

Romney will be meeting the prime minister twice during his short visit to Israel. During his first meeting (this morning), the leaders of Labor were informed by Romney’s staff that their own meeting was canceled. Some initial reports claimed that the cancellation was to make time for the nominee’s visit to the Western Wall today, but the visit to the Wall was planned and scheduled way ahead, and shouldn’t have interfered.

Romney did however meet with Kadima’s Shaul Mofaz, who has now regained his role as opposition leader.

Several people around Yachimovich told Haaretz that they believe it was the prime minister that requested from his old friend Mitt Romney to cancel the photo-op with the Labor leader, who has seen a rapid rise in the polls in recent weeks. According to this narrative, Romney’s meeting with the fragmented Kadima is no real problem for Netanyahu, but the last thing he wants is to upgrade Labor’s leaders to the level of statesmen.

This was the press release Labor issued this afternoon, stopping very short of openly accusing the Republican candidate of playing the local political game:

Labor parliamentary group leader M.K Isaac Herzog expresses regret at the surprising last minute cancellation of the meeting between U.S presidential candidate Mitt Romney and Labor Party Leader M.K Shelly Yachimovich and Herzog himself, a meeting which was initiated by Governors Romney;s staff. Herzog, who was coordinating the meeting, said he felt that Romney may have been misled by political players in Israel who are afraid of the consistent strengthening of Labor party leader Yachimovich and her becoming the clear alternative opposing Prime Minister Benjamin Netanyahu. Even though Romney headquarters knew during the coordination of the meeting that Yachimovitch was no longer serving as opposition leader, they kept the meeting and even published it details over the weekend. “It is a pity that Governor Romney did not have the opportunity to hear about the political and economical alternative that exists today to Netanyahu’s Government and that alternative is the Labor Party.”

There are indeed strong indications that Netanyahu sees a real threat in Yachimovich. Kadima has collapsed in the polls, and Yair Lapid is not gaining momentum. But recent hikes in taxes by Netanyahu and his flip-flopping on the national draft issue helped Labor gain momentum. The last poll, published this weekend, had only 10 seats between Likud (27) and Labor (another poll had Labor with more than 20 seats!). Netanyahu knows that if Yachimovich gains a few more seats, there will be a rush of voters from other left parties to Labor (as was the case with Kadima in the last election). From his point of view, this is the worst scenario possible.

Update: Romney’s staff denies Netanyahu’s involvement in the cancellation of the meeting with Yechimovitz today.