A single question from a recent public opinion poll gave some the impression that Israelis are backing off support for a peace deal. A closer look shows little actual change in public support for a two-state solution, but highlights the danger of sensationalizing polls in an ultra-sensitive environment of negotiations. As usual, the devil is in the details. 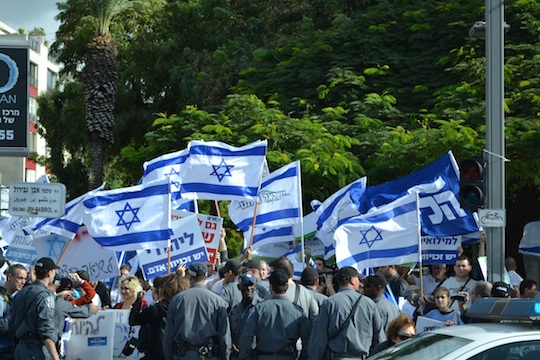 The latest Peace Index survey by Tel Aviv University and the Israel Democracy Institute has only been out for 24 hours and already there is a minor uproar: The Israeli public has turned dramatically! The Times of Israel headline says so: 63 percent oppose a major West Bank pullout! How could this possibly be, asks TOI, when just a couple of weeks ago, 55 percent of Israelis supported a two-state deal in a referendum in a Haaretz poll?

This is the moment when one inwardly sighs at the need, yet again, to do damage control over poor understanding of public opinion research; journalists, after all, are not pollsters.

Here’s the first deep and mysterious reason why the two numbers seem so contradictory: They are two different questions. Haaretz asked:

“Would you support or a oppose an agreement that would be accepted by the Palestinians and that the Prime Minister supports, that will be put to a referendum”? As noted, 55 percent in total (definitely and likely) supported the general idea of the agreement.

And the Peace Index question cited in the headline was:

“If Israel and the Palestinians reach an understanding and a permanent peace agreement that includes security arrangements for Israel, a demilitarized Palestinian state, international guarantees, and declaration of the end of the conflict by the Palestinians, in return for this peace agreement, would you support or not support each of the following? (The first line item among four questions) – “Withdrawal to the 1967 borders with territorial swaps”

In response, 32 percent of Jews (the sample was 602, and it was conducted at the end of July) said they support this item, along with 72 percent of Arabs, bringing the Israeli total to 38 percent, with 55.5 percent total opposed. Two questions later, the respondents were asked, following the same introduction:

“[And would you support or oppose] An evacuation of settlements, except for Ariel, Maaleh Adumim, and the settlement blocs?”

Here support among Jews was eight points higher than the previous question, or 40 percent, and 44 percent among the whole population (combining 69 percent support among Arabs). Fifty-two percent of the whole Israeli population is opposed – just an eight point gap. It’s not a radical change – actually this is remarkably consistent with the most recent survey by the Truman Institute at Hebrew University from June (also 601 people), showing 44 percent support and 51 percent opposed to “dismantling most of the settlements in the territories as part of a peace agreement with the Palestinians.”

Apparently withdrawal as a broad principle seems like a frightening concession (if I had to guess, because it implies relinquishing military control, which Israelis believe keeps them safe), while dismantling settlements is consistently more acceptable.

It’s true that the data on the point about withdrawing to adjusted 1967 lines looks grim as a line item within an agreement – which is always weaker than support for the whole package – but it’s not actually a dramatic change from previous years. Depending on how the question is asked, the trends range from small majorities at best, to support of around one-third at worst – so this fits in with about a decade of polling. I provided a full review here.

The bottom line is that when it comes to two-state negotiations and the Israeli public, the whole is greater than the sum of its parts. What’s the “whole”? Israelis support a two-state solution and the general agreement under consideration; but totally lack confidence in the process of getting there.

• In the Haaretz survey, the majority accepted the referendum when told that the Palestinians and most importantly, Prime Minister Netanyahu support it. I believe this is key. It’s no accident that in the current Peace Index survey, 60 percent of Jews trust Netanyahu to negotiate a deal in a way that protects Israel’s security. That’s why he was, after all, re-elected – not because of his compassionate economic policies.

• Fifty-eight percent of Jews and 62 percent of all Israelis sampled support “the solution based on the establishment of a Palestinian state alongside Israel, known as the two-state solution” (Truman Institute, June 2013)

• Fifty-four percent of Israelis support mutual recognition after a Palestinian state has been established, final status issues resolved such as Jerusalem and refugees (Truman Institute, June 2013). But when the package is outlined and described as the Saudi peace initiative, support drops dramatically in that same poll – a clear signal of awfully low levels of trust in the Arab world.

• However, a majority of Israelis no longer believe the two-state solution to be relevant (40 percent of all Israelis think it still is, in the Truman Institute poll)

• Both surveys show that fewer Israelis believe their fellow citizens support elements of an agreement (for example, a referendum, or settlement evacuation) than those who actually do. For example, 54 percent of all Israelis do not believe that a referendum would gain a majority (which is not the same as asking whether they support it themselves) in the Peace Index survey.

• This is not a time for over-confidence on the left or the right. The public is prepared to accept the concessions it resents, in return for end of conflict and mutual recognition clauses – but in my opinion, only if the Israeli Prime Minister himself is fully committed to the agreement, showing straightforward leadership and not Janus-faced ambiguity. Unfortunately, that’s not his strong point.