Against the backdrop of a crisis of governance in Palestine and the brewing battle of succession, Palestinian Islamic Jihad is proposing a return to armed struggle. But is that what the Palestinian people want? 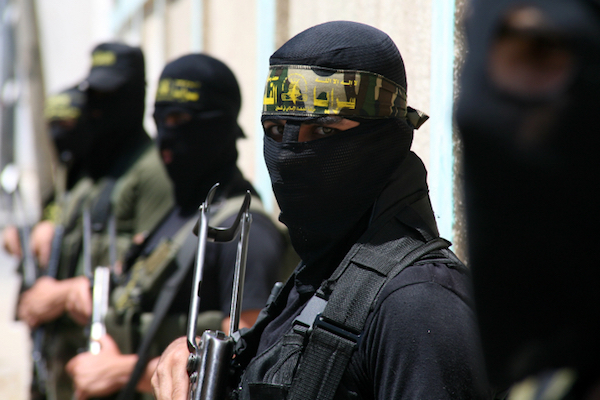 On October 21 of this year, Palestinian Islamic Jihad (PIJ) leader Ramadan Shalah gave a speech marking 29 years since the movement’s founding. Shalah’s speech largely resembled those he has given in the past, but the historical and geopolitical context has changed. Twenty-three years have passed since the failure of the Oslo Accords and changes are taking place in the Palestinian, Arab-Muslim and international arenas. In light of all this, Shalah was able to abandon his question of what will happen after Palestinian President Mahmoud Abbas’ departure, and move on to the more pressing question: What will happen after the loss of Palestine?

PIJ, formed in the 1980s, was one of the instigators of the First Intifada. But it was pushed to the political margins after the signing of the Oslo Accords and for more than 20 years has been a fractious military movement that torpedoed any truce it disagreed with. It has not developed a regional base for itself, nor has it stood in local council elections or for the Palestinian Legislative Council, meaning it has effectively sidelined itself in the Palestinian political scene.

On the verge of finding himself and his movement in a new political arrangement featuring Marwan Barghouti as Palestinian president and Khaled Meshal as prime minister, Shalah is seeking to return to past glories. During his speech, Shalah called for a number of steps: the cancelation of both the Oslo Accords and the recognition of Israel; the building up anew of the Palestine Liberation Organization; a strategic alignment of all Palestinian groups (within the Green Line, in the West Bank and Gaza, and in the diaspora) for a common, armed struggle; and the strengthening of the boycott movement against Israel. He also harshly criticized Arab regimes for abandoning the fight for Palestinian liberation and normalizing ties with Israel.

Meanwhile, three trends are threatening to push the Palestinian issue off the Arab and global agenda that may drive a strategic reset in the Palestinian struggle. The first is the attempts by the regimes in Turkey, Iran and Qatar to wrest the regional leadership role from the grip of weakened “secular” Arab governments and to rescue Palestine from the Israelis. The second is the lack of attention from central players in the international community to what is happening in the occupied territories, because of more pressing regional and global crises. Stabbings and occasional rocket fire from the Palestinian side, and the occupation from the Israeli side, pale in comparison to what are — quite literally — more burning issues.

The third trend is the Palestinian Authority’s crisis of governance in the territories and ongoing distrust of the political leadership in the West Bank and Gaza, the implications of which were clearly evident in a recent opinion poll conducted in the territories. This reality is increasing collaboration between civil society groups in the territories; at the start of the year, a new group formed, calling itself “National Activists for the End of the Split.” The movement, which brought together well-known figures from secular nationalist and Islamic groups, was eyed with suspicion by the PA. These partnerships based on mutual interests are a recurring phenomenon, which appear during times of political crisis on the Palestinian scene.

The public battle within Fatah and Hamas over who will succeed Abbas as head of the PA and Meshal as head of Hamas’ political wing, and the involvement of other Arab actors in the issue, points to the Palestinians’ increasing dependence on regional players. Mahmoud Abbas, Khaled Meshal, Ismail Haniyeh, Mahmoud al-Zahar, Mousa Abu Marzook, Jibril Rajoub, Mohammed Dahlan and even Marwan Barghouti from inside jail are all knocking at the doors of Arab leaders, Islamic and nationalist alike. Their attempt to obtain a stamp of approval for their current or future leading role is the most tragic expression of a Palestinian leadership that has been deteriorating since the death of Yasser Arafat, and is now at its lowest point. Indeed, the pretenders to the Palestinian crown have been forced to seek outside help in appointing themselves leaders of the very people who have grown sick of them.

Shalah draped his speech in the colors of Palestinian nationalism and religion, using jihadist terminology in an attempt to breathe fresh life into a passive people being confronted with the question of “what will come after Palestine.” Abbas, in comparison, deals in the currency of diplomacy and politics, choosing the path of speeches at the UN, advancing the French peace initiative, attending the funerals of victims of the Paris terror attacks and even showing up at Shimon Peres’ funeral, a significant political risk.

Will a despairing Palestinian population stick to Abbas’ path, which is yet to help him either with the international community or in Israel? Or will they heed Ramadan Shalah’s call to reset the conflict and once again take up armed struggle against Israel?

Dr. Ronit Marzan specializes in history of the Middle East and teaches in the School of Political Science at Haifa University. She is a research fellow at the Forum for Regional Thinking, where this article was first published in Hebrew. Translated by Natasha Roth.