NEW YORK — Before Guy Davidi co-directed and produced 5 Broken Cameras, he was involved in Indymedia and an experienced filmmaker. He was also associated with Anarchists Against the Wall, Israeli anti-occupation activists. This is how he came to know the West Bank village of Bil’in, home of the film’s co-director, Emad Burnat. 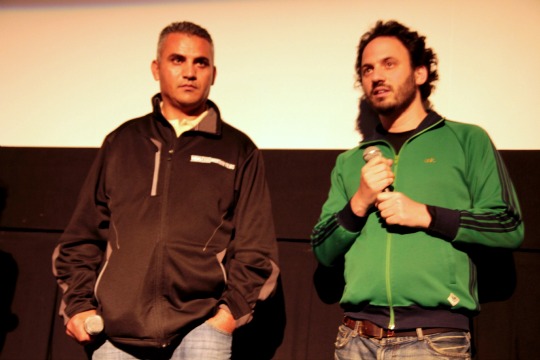 “I lived in the village for two months in 2005,” he recalled, during a conversation that took place at a coffee shop in New York, where he was promoting the film ahead of the Oscars. “That was an intense time, with the [Palestinian Legislative Council] election. That was also the time of the night raids and arrests. The struggle was just beginning. I used to go out and film the soldiers, or try to stop them. And that was when I started to get to know Emad, because he used to go out and film when I did.”

Over the next five years, Burnat shot 700 hours of footage. Every Friday afternoon, week after week, through the present day, the villagers have been holding demonstrations against Israel’s wall, which severed them from their agricultural land. Burnat filmed the tear gas, the bullets, the arrests, the beatings — and the death of his cousin, Bassem Abu-Rahmeh (“Phil”), who died when an Israeli soldier shot a tear gas canister directly at his chest.

With another 300 hours of footage from other sources, Davidi and Burnat scripted and edited the film so that the narrative focuses on the 2005 birth of Burnat’s son Gibreel, who grew up against the background of the village’s struggle and all the attendant violence; and on the eponymous five cameras, broken successively by tear gas canisters, rubber bullets and similar violent incidents.  The result is a deeply moving, thought-provoking documentary that won critical acclaim and a major award at the Sundance Festival. Then came the Oscar nomination, in the category of best feature documentary. 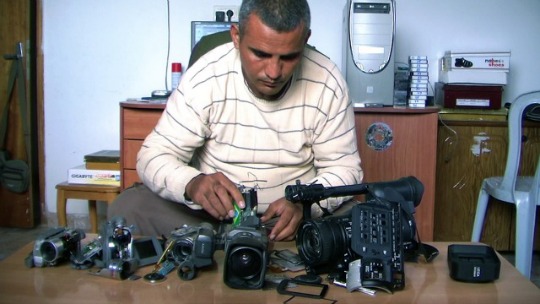 The making of a film is always an enormous undertaking, even under the best of circumstances. But when a Palestinian and an Israeli Jew set out to produce jointly a documentary about Israel’s occupation as seen through Palestinian eyes, the physical, social and political challenges are enormous. At first, Davidi was not sure he wanted to take the project on.

“I’m Israeli and he is Palestinian, so of course I knew we would be heavily criticized for working together,” said Davidi. But Burnat was determined to make the film and Davidi was the most obvious partner — an experienced filmmaker who knew Bil’in and was involved in the anti-occupation struggle at the grassroots level.

One of the challenges the two men faced was the anti-normalization position in Palestinian society, which some advocates interpret as going beyond a boycott of Israeli goods and institutions to include cultural or artistic partnerships.

When the Israeli media began referring to 5 Broken Cameras an an Israeli film, a competition between the Palestinian and Israeli press over over national credit ensued. Finally, it was screened at a large cultural center in Ramallah. Davidi was not invited.

“Emad did not get a lot of exposure for this film. In Ramallah people criticized him for working with Israelis.” He continued, “I believe the film succeeds not only because it’s good, but because it shows the partnership between Jews and Palestinians.”

“The Israeli Left likes to see 5 Broken Cameras as a film that points the finger of blame at Israeli society. This is also the strategy of Palestinian society, to point the finger at Israel. So the whole discussion of the occupation is about guilt, which is very destructive. I’m saying there is no room for guilt. There is only room for taking responsibility. A lot of Israelis say it’s so great that Israelis and Palestinians are working together — but then they go off and cry [about the occupation]. There is no place for tears and guilt here. Only taking responsibility.”

Even after the Sundance Award, said Davidi, the film was ignored in Palestine. Similarly, Davidi could not find a commercial cinema to screen the film in Tel Aviv. Instead, it found a home at the Cinematheque — the local art house cinema. Then came the Oscar nod, and the Israeli media rushed to claim the film as one of their own. It was broadcast on one of the local cable television stations, and then finally on the widely watched Channel 2 this week — albeit at 11 p.m.

“I do want to challenge the anti-normalization discourse,” said Davidi. “It’s an important topic and an important discussion to have. I support some aspects of anti-normalization, but I think it’s out of all proportion in Palestinian society. Of course it’s true Israelis don’t pay the same price as the Palestinians. They are occupied. But we should talk about these things.”

With a touch of cynicism, Davidi commented, “There were times I felt I had not sufficiently proved myself. I thought to myself that maybe we needed an Israeli activist to die in order to win credibility. Perhaps not enough Israeli blood has been spilled.”

The young filmmaker has been trying to ignite a conversation within Israeli society, too. He crowd-sourced the funds and led group discussions about the film with high school students, then realized after the first screening that the teenagers would need some advance preparation before seeing the film.

“The Israeli high school kids who saw the film without any prior preparation went into shock,” he said. “They had gone through a school system that prepared them for the army. It wasn’t fair to come to them and break that image with a hammer all at once, to break that world of lies they live in.”

He continued, “Of course they got angry at me, accused me of lying and being a traitor. But the anger is really against the whole system that lied to them. And I know what that’s like because I lived through it. So I tell the kids, ‘Go ahead and get mad at me. Take it all out on me. Soon you will realize that your anger is not against me, but against the whole system that lied to you.’”

“I hope,” he said, “That there will be enough time for them to think about these things before they go into the army. I want to tell them, ‘Hey you’ve got a couple of years between the ages of 16 and 18 to think about what you’re doing and choose a different path.’”

Davidi was drafted to the army at age 18 along with his peers, but knew immediately that he could not serve (“I saw that everything was totally corrupt in the army. They teach you to steal and lie“). He obtained a psychological discharge three months into his basic training. It was that brief experience in the army that politicized him, said Davidi. “My family is not Leftist.”

Davidi’s mother now lives in Silver Spring, Maryland, where she teaches at a Jewish day school. Tonight she will accompany her son to the Academy Award ceremony in Los Angeles. But when we spoke less than two weeks ago,  Davidi told me she had not yet seen the film.

“It’s hard for her, “ he said. “People – Jewish Americans and Israelis – told her that her son was a traitor.”

Despite their political differences, Davidi says that he and his family get along well today. About the film, he says, “I made it for spiritual reasons. Without those spiritual reasons, there would be no film.”