A young Palestinian boy walks by a section of the Palestinian side of the Separation Wall in the West Bank city of Abu-Dis. Israel says the barrier is necessary for security while Palestinians call it a land grab. September 29, 2014. Photo by Miriam Alster/FLASH90 *** Local Caption *** ‚„¯ ‰Ù¯„‰ ÙÏ˘˙ÈÈÌ ÙÏ˘˙È‡ÈÌ ÙÏ˘˙ÈÈ ÙÏ˘˙È‡È ÙÏÒËÈÈÌ ‡·Â „ÈÒ ÙÏÒËÈ‡ÈÌ ÙÏÒËÈÈ
facebook twitter email link

Like the children of countless American Jewish families, throughout her childhood Ayelet Waldman was told that trees were being planted in her name across Israel, something very few people questioned back then.

“This is the first time I have ever planted a tree for Palestinians,” she says as she looks out at the West Bank village of Susya on a balmy day in the middle of June. “My grandmother would donate money to the Jewish National Fund, which would then plant trees in my name. She had no idea that the money she was giving would go toward the settlement enterprise.”

Planting trees in Susya, Waldman, an Israeli-American author and essayist, along with her husband — author and Pulitzer Prize winner Michael Chabon — and their two youngest children, set out to actively resist Israel’s West Bank settlements, and the Israeli military regime that props them up. Susya, a hamlet in the South Hebron Hills, has become a flagship of nonviolent resistance over the past decade or so, withstanding numerous demolition attempts, all the while facing violence and harassment from nearby settlements. 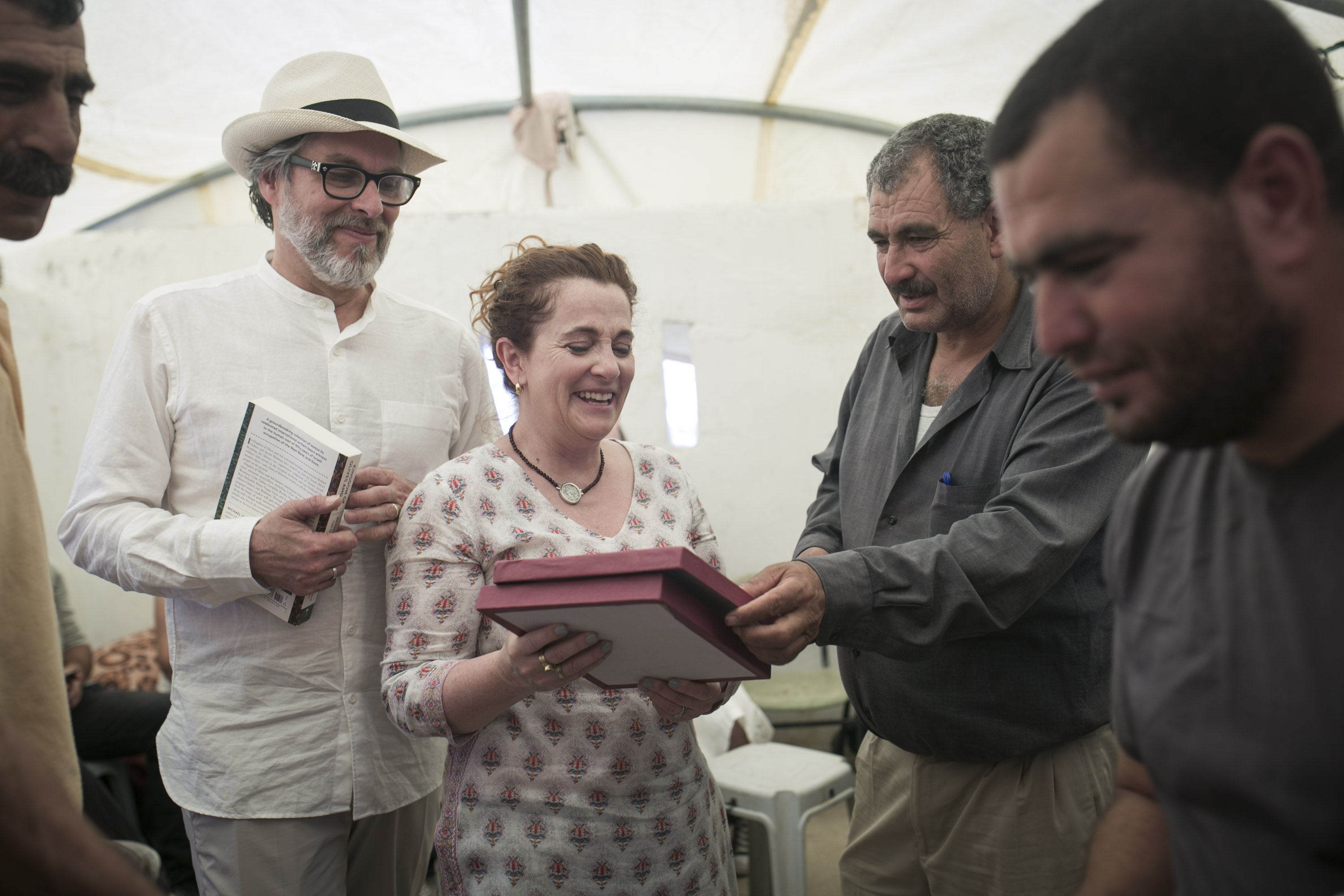 Authors Michael Chabon (left) and Ayelet Waldman (middle left) receive a plaque from the Palestinian residents of Susya, recognizing their contribution to the village’s struggle. (Breaking the Silence)

Chabon and Waldman were in Susya that day with a group of Israeli authors planting trees in the village school, one stop on a whirlwind tour across Israel-Palestine to launch their new book, Kingdom of Olives and Ash. The book is a collection of essays by international, Palestinian, and Israeli writers, which they published in order to mark five decades since Israel’s occupation of the West Bank and Gaza.

Partnering with Israeli anti-occupation group Breaking the Silence, Waldman and Chabon enlisted literary giants such as Geraldine Brooks, Dave Eggers, Mario Vargas Llosa and Colm Toibin to spend time in the West Bank and Gaza, to bear witness to the occupation, and write about the things they saw.

Every Jew needs to bear witness

Waldman, 52, was born in Israel to left-wing Zionist parents who had immigrated from Montreal. Her father served in the Palmach, a paramilitary group that fought in the 1948 War, and helped found a kibbutz near the border with Gaza. Waldman’s formative years were spent in Israel, including during the Six-Day War in 1967, during which she remembers trying to avoid mortars and bombs while driving to her grandmother’s house on the other side of Jerusalem.

She eventually moved to Canada and then to the United States, where she developed what she terms a “somewhat atypical American Jewish connection” to Israel, spending summers in the Holy Land, living for a time on a kibbutz in the north, and studying for a year at Hebrew University. “My most formative years were here, but then I stayed away for a couple of decades.”

“I’m a progressive. I was a public defender; I’ve done social justice work all my life. My parents were similar, but they seemed to have no problem balkanizing their politics when it came to Israel. They were considered very left wing in Israel, and yet there were some basic assumptions they just didn’t question — and at a certain point I began to feel like the hypocrisy was more than I could tolerate.” 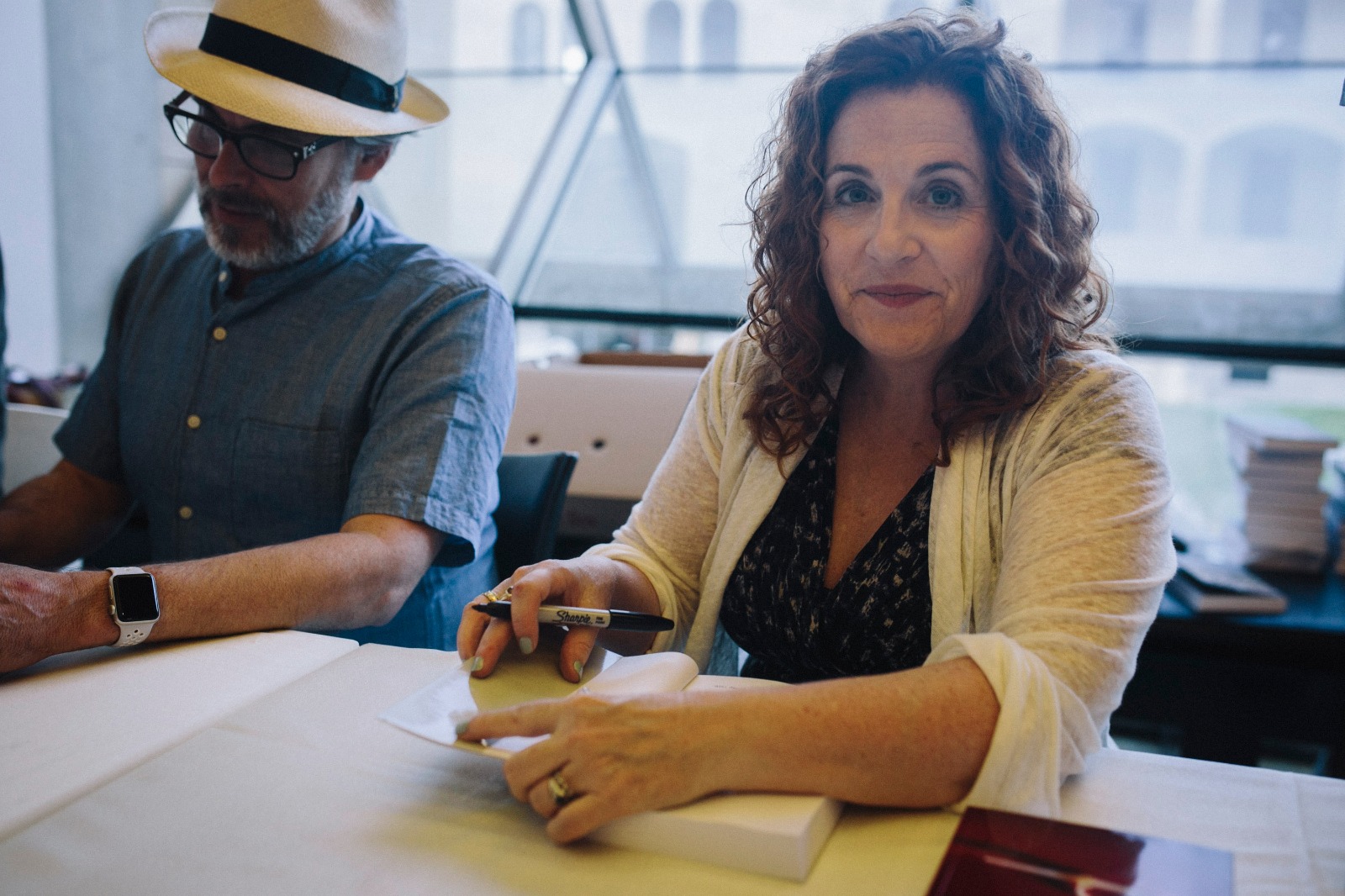 Authors Ayelet Waldman (right) and Michael Chabon sign copies of their new book, Kingdom of Olives and Ash, at a book launch event in Jerusalem. (Breaking the Silence)

“They were against the occupation, but they didn’t do anything about it. Throughout his entire career [my father] raised money for Israel, bringing mission after mission to this place. And yet he didn’t show them Hebron. He didn’t show them the occupation. The goal was to raise money for Israel and bankroll the emerging state, and I couldn’t do that.”

That was until she met a member of Breaking the Silence at a local event in Berkeley, California, where she and her family live — a meeting that rekindled her relationship with the Jewish state and brought her back in 2014 to witness the occupation for the first time.

“You really don’t believe it until you see it,” she says, her voice rising. “If you would have told me before that I would go to a kindergarten and see that settlers had spray painted the words ‘gas the Arabs’ on the walls, I would have accused you of anti-Semitism, because only an anti-Semite would ever say that kind of thing. Guess what? I saw that yesterday. That’s why every Jew who comes here has to see this. You want to support Israel? By all means. You want to support the occupation and the settlement enterprise? Fine. But first go to Hebron and then you tell me if you can live with yourself.”

In a sense, Kingdom of Olives and Ash is the culmination of Waldman’s second stab at forging a meaningful relationship with Israel. “As an American, there is only so much I could do and so much of my body that I can put on the line. But what I do know how to do is tell stories, so I marshaled all of these storytellers to see if they wanted to come see what I saw here in the occupied territories and write about it.”

It was Waldman’s ambivalent relationship with the Jewish state that initially roped in Chabon. His first trip to the holy land came in 1992, a year before they married, which Waldman recalls as necessary to “really show him who I am and where I come from.” (A decade and a half later, echoes of that visit would find their way into the surging coda of his award-winning novel, The Yiddish Policemen’s Union). When she returned from her 2014 trip, however, Chabon knew something was different. “When I saw the extent of her passion, her sorrow and anger, I didn’t have to twice to think twice about it, and immediately thought ‘Okay, what are we going to do about this and how are we going to do it’?” 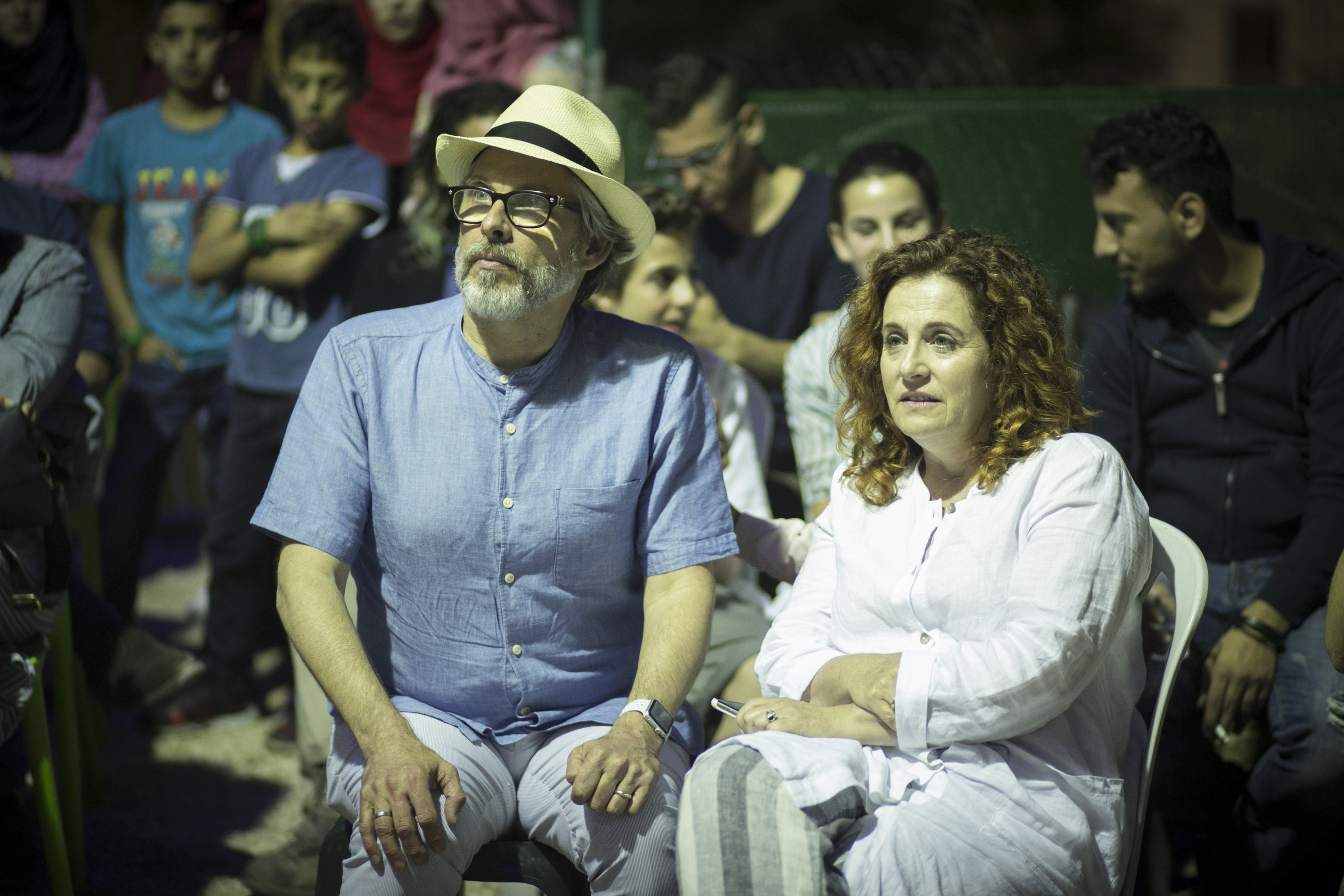 Chabon and Waldman at a book launch event in Hebron, West Bank. (Breaking the Silence)

The two came back to the West Bank last year to gain a better understanding of life under military rule, informing their respective essays in Olives and Ash. (Chabon’s piece tells the story of his journey alongside Palestinian businessman and activist Sam Bahour around what the latter describes as “the cage” of the occupation, while Waldman’s essay, “Justice, Justice You Shall Pursue,” follows the Kafkaesque military trial of Karim, a young Palestinian activist from Hebron who is arrested after being accused of carrying a knife with an intention of stabbing Israelis).

For years Chabon had heard and read about Israel-Palestine, but it was seeing the occupation from up close that turned it into a fait accompli.

“There are visual clues that start to make you notice things. So you begin to ask questions, then you get an answer, then you start making sense of it all. For instance, you’re driving down a highway and there is a Jewish settlement on one side and a Palestinian village on the other. You start to wonder why the Palestinian homes have black water cisterns on the roofs, while the settlements have a single, large water tower. Then you realize — there is a difference between someone telling you that Palestinians don’t have a consistent water supply, and seeing it for yourself.”

For Chabon, bringing professional, international writers to witness the things he had seen seemed like a no-brainer. “The job of the professional writer consists of paying attention, noticing things, and getting to their granularity,” he says. “Then the writer takes all those things and uses the power of language to recreate it in the reader’s mind. Language and literature are still the most powerful tools to getting someone as close as they can to be in someone else’s mind without actually being there.”

Yet despite the acclaim surrounding the book, Chabon knows that most Israelis will take kindly neither to his political positions nor to the fact that he and Waldman teamed up with Breaking the Silence, an organization whose anti-occupation work has turned it a pariah for many. “Israeli society is obeying the dictates of a government that doesn’t want people to know, that wants people to look the other way,” Chabon says as the group leaves Susya, crisscrossing the hills of the southern West Bank in a minibus headed for Bethlehem. “The disinclination to see the occupation only serves the policies and agenda of the Israeli government. It makes sense then that Breaking the Silence would engender the harassment it encounters.”

But he remains optimistic, welcoming signs of a sea change among the American Jewish community, significant pockets of which are slowly waking up to the brutal and unsustainable reality Palestinians face. “The Israeli government creates an impression of a kind of monolithic global block of support for Israel and the occupation. But the reality is that the increasing majority of American Jews are slowly coming to realize that they cannot continue with the reflexive knee-jerk support of everything that Israel does.”

“It is much easier to see what’s happening here when you’re coming from America,” Waldman says. “Living in Israel, there is pressure to turn away from what’s happening. We have to remember that hasbara is not just about the way Israel wants to portray itself to the outside world. It also has an internal logic: They don’t want you to look at what happens in Susya or in Hebron. Hasbara is a tumor and it is the obligation of every Israeli to excise it from their body and their mind.”

“I’m not naïve, I know this project isn’t going to bring peace,” she continues. “It’s not going to change Netanyahu or cause him to end settlement building. But occupation and injustice, in my eyes, are a vast edifice. Edifices fall, and the way they fall is by removing the bricks one by one. This book is simply me pulling out one brick.”